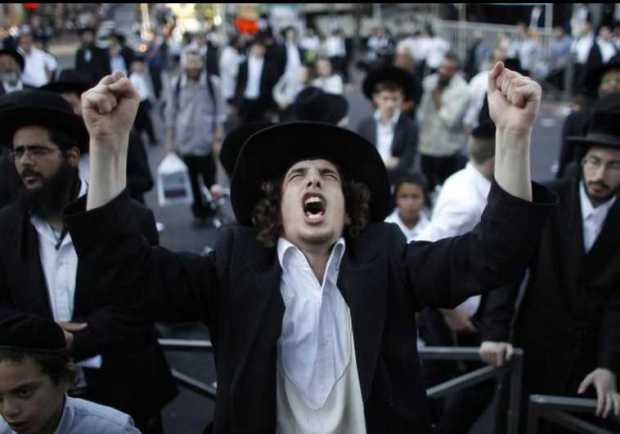 The rabbis combined several tragic events occurring within the Hebrew month of Tevet and memorialized them on the date the siege of Jerusalem began.

ed note–several VERY important ‘protocols’ contained herein that all Gentiles (at least those with a vested interest in living) need to carefully read and consider for themselves.

1. Although the term ‘Never Forget’ was (officially at least) adopted by organized Jewry after the great ‘bonfire of humanity’ known as the ‘Hollercost’, as a principle it has been part of their ‘protocols’ for 6,000 YEARS. Judaism, being in its essence the most diabolical, distilled and deadly form of pathological narcissism ever to pollute God’s green earth, means that every slight (real or contrived) every injury (genuine or imagined) every insult (deserved or not) every STUBBED TOE resulting in even the most microscopic, infinitesimal degree of discomfort or discontent on the part of the specialest, bestest, most precious, most ‘chosen’ and beloved members of the LEAST statistically-significant members of creation MUST BE expanded, exploded, and amplified 666% above and beyond the actual importance of these slights, injuries, insults and stubbed toes so that everything else existing within God’s green earth is drowned out, pushed aside, disregarded, ignored, and discounted.

Whereas the rest of the world–in the interests of attaining some peace of mind, progress of spirit and congress of humanity–live their lives by the motto ‘forgive and forget’, the Jews, drawn more to the Beatles’ song ‘Yesterday’ than they are to ‘Don’t Stop Thinking About Tomorrow’ by Fleetwood Mack, live by the motto NEVER forgive and NEVER forget.

Now, all of this would be fine and dandy where this statistically-insignificant group hiding out in some cave somewhere in the mountains of who-knows-where, with no power, no money, no influence, and no bigger agenda than simply congregating and group-wailing over these slights, insults, injuries, etc, etc, etc.

We know however that this is not the case. Despite their statistically-insignificant numbers (relative to the rest of the 7 billion human souls inhabitating God’s green earth) they possess the lion’s share of accumulated wealth, political influence, media control, and, lest we forget, several hundred nuclear weapons which they hold like a loaded, cocked pistol to the collective head of humanity and which they use in blackmailing superpowers into giving into their demands.

Now, as all of this relates to what appears below scribed by our deranged ‘Rebbe’-

The 10th of Tevet is not some obscure ‘tradition’ within Judaism with no special or dangerous implications attached to it therein. Remember that although it took about 3,000 years, the Jews ‘avenged’ themselves against the ‘Babylonians’ (modern-day Iraq) for the destruction of their Temple in what was first ‘Operation Desert Storm’ by George H.W. Bush and then what followed with the ‘shock and awe’ of ‘Operation Iraqi Freedom’ wrought by the defective fruit of his presidential loins, his mentally and intellectually-paralyzed son, George W. Bush. It was precisely this reason, of ‘never forgetting’ about the significance of the 10th of Tevet that explains why organized Jewry maneuvered today’s version of the Roman Empire–America and the West–into destroying ‘Babylon’.

Likewise, remember that there has not yet been any destruction of ‘Rome’ as recompense (revenge) for what happened in 70 AD when Titus destroyed the other Temple. We–the West–find ourselves in the preparatory phase of that day of revenge that has been planned for almost 2,000 years which is soon to come and which began with 9/11, followed by the destruction of Iraq and what the Jews plan/hope will be the ‘fall of Rome’ with the Apocalyptic events attached to/associated with the ‘plague’ of Covid that was sent by the ‘god’ of the Jews, Yahweh.

1. The translation of the Torah into Greek, the ‘lingua franca’ of the day, thus giving the Gentiles a better understanding of just what the Jews (Hebrews, She-brews, Israelites, whatever we want to call them) thought of them and–more importantly–what kind of ‘plans’ they had in mind for them, thus affording the Gentiles the ‘vaccine necessary in developing those ‘antibodies’ within their civilizational immune system that would/could protect them from the dangerous virulency of Judaism.

It is also believed that this translation resulted in Jews coming into closer contact with the more relaxed and enlightened Greek culture, resulting in large numbers of them falling away from the suffocating prison of the Judaism that formed their world view and which was only ‘remedied’ by the Maccabean revolt, celebrated every year at H’Nooka and which commemorates WITH JOY the large numbers of ‘apostate’ Jews who were murdered en masse by the Maccabean Juhadists.

The Tenth of Tevet is one of the four fast days that commemorate dark times in Jewish history. The others are Tisha B’Av (the day of the destruction of both Temples in Jerusalem), the 17th of Tammuz (the day of the breaching of the defensive wall of Jerusalem by Titus and the Roman legions in 70 CE), and the third of Tishrei (the day that marks the assassination of the Babylonian-appointed Jewish governor of Judah, Gedaliah ben Achikam. He was actually killed on Rosh Hashanah but the fast day was advanced to the day after Rosh Hashanah because of the new year holiday).

The Tenth of Tevet is viewed as such a severe and important fast day that it is observed even if it falls on a Friday.

The Tenth of Tevet marks the onset of the siege of Jerusalem by Nebuchadnezzar, the King of Babylonia, and the beginning of the battle that ultimately destroyed Jerusalem and the Temple of Solomon, and sent the Jews into the 70-year Babylonian Exile. The date of the Tenth of Tevet is recorded for us by the prophet Yechezkel, who himself was already in Babylonia as part of the first group of Jews exiled there by Nebuchadnezzar, 11 years earlier than the actual destruction of the Temple in Jerusalem itself.

The Tenth of Tevet is viewed as such a severe and important fast day that it is observed even if it falls on a Friday (erev Shabbat), while our other fast days are so arranged by calendar adjustments as to never fall on a Friday, so as not to interfere with Shabbat preparations.

On the eighth of Tevet, King Ptolemy of Egypt forced 70 Jewish scholars to gather and translate the Hebrew Bible into Greek. Even though the Talmud relates to us that this project was blessed with a miracle — the 70 scholars were all placed in separate cubicles and yet they all came up with the same translation — the general view of the rabbis of the time towards this project was decidedly negative. The Talmud records that when this translation became public “darkness descended upon the world.”

The ‘koshering’ of the Greek language by its use in translating the Hebrew Bible had wide ramifications in Jewish society.

This translation — the Septuagint — eventually became the basis for the Old Testament section of the Christian bible a few centuries later. The Greek translation of the Bible also further aided the advance of the agenda of the Hellenist Jews in bringing Greek culture into Jewish life, and to attempt to reform Judaism in the image of Greek values and lifestyle. The “koshering” of the Greek language by its use in translating the Hebrew Bible had wide ramifications in Jewish society and undermined some of the efforts of the rabbis in combating the allure of Greece in Israel of then.

DEATH OF EZRA THE SCRIBE

The ninth day of Tevet is held to be the day of the death of Ezra the Scribe. This great Jew is comparable even to Moses in the eyes of the Talmud. “If the Torah had not been granted through Moses, it could have been granted to Israel through Ezra.” Ezra led the return of the Jews to Jerusalem from their Babylonian exile. It was under his direction and inspiration, together with the help of the court Jew, Nechemiah, that the Second Temple was built, albeit originally in a much more modest scale and style than the grandeur of Solomon’s Temple.

Ezra also renewed the covenant of Moses between Israel and God, staunched the flow of intermarriage that afflicted the Jews returning to Jerusalem, strengthened public and private Sabbath observance, and created the necessary schools and intellectual tools for the furtherance of the knowledge and development of the Oral Law of Sinai within the Jewish people.

A man of incorruptible character, great compassion, deep vision and erudition and inspirational charisma, Ezra the Scribe is responsible for the survival of Judaism and of the Jewish people till this very day. It is no wonder therefore that Jews marked the day of his death as a sad day on the Jewish calendar. Since fasting on the eighth, ninth and 10th days of Tevet consecutively would be unreasonable, the events of the eighth and ninth were combined into the fast day of the Tenth of Tevet.