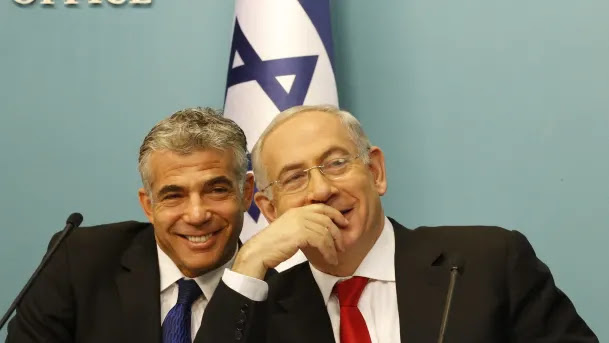 Times of Israel
Palestinian Authority President Mahmoud Abbas on Wednesday sent an emergency delegation to meet with Israeli officials to express their anger over the Trump peace plan, including a personal note to Prime Minister Benjamin  Netanyahu, Channel 12 reported.
According to the report, the delegation, led by PA Civil Affairs Minister Hussein al-Sheikh, met with Finance Minister Moshe Kahlon in order to tell Israel that the PA views the plan presented Tuesday in Washington as voiding the Oslo peace accords and that the Palestinians now feel free to break their commitments, including security cooperation.
In recent years Kahlon and al-Sheikh have held regular consultations, mainly over economic cooperation, in the absence of formal talks between Israel and the Palestinians.
The Palestinian delegation reportedly gave Kahlon a handwritten note in Arabic from Abbas to Netanyahu.
“The plan is an American and Israeli disavowal of the Oslo accords, and so the Palestinian Authority now sees itself as free to disregard the agreements with Israel, including security cooperation,” Channel 12 quoted the note as saying.
The report said Abbas wanted to inform Israel before he traveled to a meeting of the Arab League in Cairo, where he is expected to make similar announcements, before visiting other countries to try to rally support.
Kahlon told al-Sheikh he would give the letter to Netanyahu when the prime minister returns from a trip to Russia on Thursday.
The Palestinians reacted angrily to US President Donald Trump’s plan after it was announced Tuesday. Abbas called it the “the slap of the century.”
“We say a thousand times: No, no and no to the ‘deal of the century,’” Abbas said, adding that the US plan “will not come to pass” and that “our people will send it to the dustbins of history.”
Al-Sheikh reportedly told Kahlon that not only had Abbas refused to take a call from Trump ahead of the release of the plan Tuesday, he had also refused to accept a letter sent to him by Trump.
Kahlon warned the Palestinians not to take any rash steps and to avoid violence. He also suggested that the Palestinians temper their response until after the March elections in Israel, reportedly telling al-Sheikh that everything could change after the vote.
Abbas has called for a “popular” movement to oppose Trump’s plan, but protests on Tuesday night were relatively small.
On Wednesday a few hundred people gathered in the Jordan Valley, a key strategic area the plan gives Israel the right to annex.
The plan does not include some key demands by Palestinians, such as the Temple Mount in Jerusalem being part of their capital, the return of Palestinian refugees to live in Israel, and the removal of Israeli settlements in the West Bank. It also allows for broad Israeli annexation moves. It provides for a future Palestinian state subject to a series of conditions and limitations, with Israel retaining overall security control of the area.
At the Arab League at the weekend, Abbas will request “support and backing for the Palestinian position to face the (US and Israeli) pressure,” Palestinian Authority Foreign Minister Riyad al-Maliki told AFP.
He said the PA would take any annexation to the International Criminal Court.
Abbas has threatened on multiple occasions in the past to nullify agreements with Israel, including the 1993 Oslo accords.
The two governments work together on matters ranging from water to security, and withdrawing from agreements could impact security in the West Bank.
In a Washington Post op-ed, chief Palestinian negotiator Saeb Erekat called on other countries to take the lead in negotiating peace.
But so far the international reaction has been muted, with few indications of serious outside pressure on the US and Israel.
Regionally, Arab states in the Gulf have moved closer to the Jewish state amid shared hostility to Iran.
In his speech Abbas said he had heard “promising (international) reactions against the Trump plan. We will build on them.”
But Saudi Arabia and other regional players said they would study the proposals, withholding immediate criticism.
The United Arab Emirates went further by calling the plan an “important starting point” for peace talks.
In a neutral reaction, Egypt, whose capital hosts the Arab League, has called on Israel and the Palestinians “to undertake a careful and thorough examination of the US vision to achieve peace.”
The European Union is also split over how tough to respond if Israel goes ahead with annexation, diplomats said.
In a meeting Wednesday, Erekat met EU envoys and called on them to recognize the state of Palestine, a long-standing demand, two diplomats said.
But consensus remains elusive, the diplomats said, with countries such as Hungary opposing measures favored by Sweden, Ireland and others.
Abbas also plans to visit the UN within two weeks to address the Security Council on his rejection of the new US Mideast plan, his ambassador to the body said Wednesday.
At that time a draft resolution will be submitted to the council, Riyad Mansour told reporters, without specifying a date for the visit.
He said Abbas would take part in the Arab League meeting on Saturday and an African Union summit in February.
Before coming to the UN the president might also meet with European Union officials, Mansour said.
The diplomat expressed hope that by then agreement would have been reached on a draft resolution.