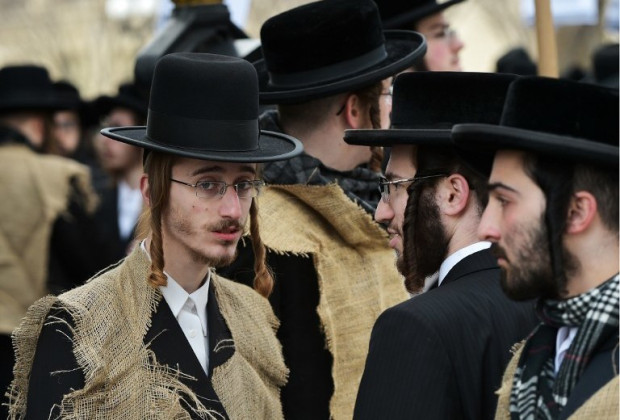 ed note–an excerpt from the diary of US General George S. Patton in detailing his own personal experiences with these folks following WWII seems to be relevant–

‘It was the feast of Yom Kippur, so they were all collected in a large wooden building which they called a synagogue. We entered the synagogue, which was packed with the greatest stinking bunch of humanity I have ever seen. When we got about halfway up, the head rabbi, dressed in a fur hat similar to that worn by Henry VIII of England and in a surplice heavily embroidered and very filthy, came down and met the General…. The smell was so terrible that I almost fainted and actually about three hours later lost my lunch as the result of remembering it…. Of course, I have seen them since the beginning and marveled that beings alleged to be made in the form of God can look the way they do or act the way they act.’

Jewish pilgrims left mountains of trash on the Ukrainian border with Belarus on Friday after they abandoned the site having camped out for several days following Kiev’s refusal to allow them entry in line with coronavirus rules.

The Ukrainian deputy interior minister Anton Gerashchenko posted photos of the garbage on Facebook, saying the mess would need to be cleared up after Belarus allowed the pilgrims to reach the border with Ukraine.

“Thank you to the border guards for your work on the border. Despite significant psychological pressure, you did your duty. We warned Belarus that the pilgrims could not reach Ukraine. We asked the Belarussians not to let the pilgrims enter their territory. They did not listen to us and now we will have to clean up the filthy mess they left,” he wrote.

At least 1,000 Orthodox-Jewish believers were camped out this week in no-man’s land between Ukrainian and Belarusian border crossings ahead of Jewish New Year celebrations which began Friday evening and last until Sunday.

Tens of thousands of Hasidic Jews travel to the central Ukrainian city of Uman every Jewish New Year to visit the tomb of Rabbi Nachman, the founder of the Bratslav Hasidic movement, but were told not to this year due to the pandemic.

The standoff between the pilgrims and armed Ukrainian security services sparked tensions at the Novi Yarylovychi border crossing and inflamed a diplomatic row between Minsk and Kyiv, which have traded barbs over disputed presidential elections in Belarus last month.

Belarus strongman Alexander Lukashenko earlier told his officials to negotiate a travel corridor with Ukraine and offered to provide buses to transport religious believers to holy sites in Ukraine.

Kyiv in turn accused Belarusian authorities of giving false hope to the Hasidic pilgrims that they would eventually be allowed to travel to Uman.

Meanwhile police said up to 3,000 Hasidic Jews arrived in Uman for the celebrations, entering Ukraine before the ban.

Law enforcement has tightened security near Rabbi Nachman’s tomb where pilgrims have congregated.