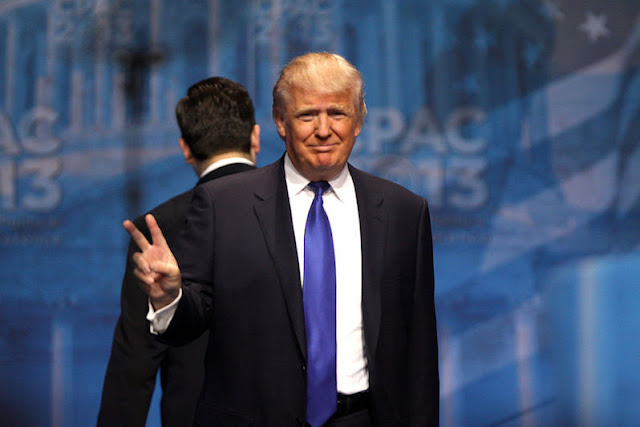 ed note–anyone out there billing themselves as ‘eks-purts’ to whatever quantitative or qualitative degree on the topsy-turvy world of modern-day politics and claiming that Trump is a ‘warmonger for d’Jooz’ (and particularly now that the entire ‘Soleimani assassination’ and subsequent Iranian response has been revealed for the absolute dud that it was/is intended to be) needs to be relegated off to some obscure corner somewhere with all the materials needed to weave baskets for sale at some bazaar.
With the nonsense they peddle, they do nothing except to advance the agenda of Judea, Inc that has as it’s primary mission right now the political assassination of an American president who intends to remake the ‘neighborhood’ in the Middle East in the same way he infamously re-made neighborhoods in Manhattan as a real estate developer.
Newsweek.com
President Donald Trump said that the United States and Iran should work together against their common foe of the Islamic State militant group (ISIS), hoping the Islamic Republic would change course after the latest incident in the dramatic escalation of tensions in which Iran launched missiles at Iraqi military bases hosting U.S. and allied troops.
Iran’s Revolutionary Guard launched short-range ballistic and cruise missiles Tuesday against Ayn al-Asad Air Base and a military site in Erbil in what the elite Iranian military branch said was “retaliation for the brutal assassination” of Iran’s Quds Force commander Qassem Soleimani in a U.S. drone strike Thursday in Baghdad. Trump on Wednesday defended his decision to target Soleimani, a U.S.-designated terrorist, but announced that Iran’s attack inflicted no U.S. or Iraq casualties.
The president attributed this to “precautions taken, the dispersal of forces and an early warning system that worked very well.” With no lives lost, Trump opted to avoid a military response and instead sought to expand his maximum pressure campaign, arguing Tehran “must abandon its nuclear ambitions and end its support for terrorism.” Offering an off-ramp to mounting tensions, Trump noted that both Washington and Tehran both considered the Islamic State militant group (ISIS) to be a “natural enemy” and that the two could cooperate in defeating it.
“The destruction of ISIS is good for Iran, and we should work together on this and other shared priorities,” Trump said. “To the people and leaders of Iran: We want you to have a future and a great future. One that you deserve, one of prosperity at home, and harmony with the nations of the world. The United States is ready to embrace peace with all who seek it.”
Washington and Tehran share four decades of mutual animosity but both contributed extensively to the battle against ISIS, especially in Iraq, where Iran has backed mostly Shiite Muslim militias active since the 2003 U.S.-led invasion that toppled longtime leader Saddam Hussein. U.S. troops faced off with these militias along with the Sunni Muslim insurgency that gave rise to Al-Qaeda and ISIS, which both Iran and the U.S. launched campaigns to fight in 2014.
The two powers also battled ISIS in neighboring Syria, but backed opposing factions as the U.S. supported the mostly Kurdish Syrian Democratic Forces and Iran assisted the Syrian government. Washington previously tried to overthrow Syrian President Bashar al-Assad’s government by assisting a 2011 rebel and jihadi uprising but shifted priorities around the same time that Russia joined the battle to support him in 2015.
Iran twice launched missiles from its territory into eastern Syria in response to attacks claimed by ISIS within the Islamic Republic in 2017 and 2018.
Soleimani himself played a frontline role in Iran’s cross-country war against ISIS, mobilizing allied groups from as away as Afghanistan and Pakistan. As ISIS was degraded, however, the U.S. and Iran’s regional rivalry reignited, especially after the Trump administration left a historic nuclear deal struck between the two countries and other major powers in 2015.
Trump opened his remarks Wednesday by saying that “Iran will never be allowed to have a nuclear weapon” under his presidency, something Tehran has officially denied seeking. He called on fellow nuclear deal signatories China, France, Germany, Russia and the United Kingdom to altogether leave an agreement he long argued did not go far enough in restraining Iran’s “bad behavior.”
“They must now break away from the remnants of the Iran deal—or JCPOA—and we must all work together toward making a deal with Iran that makes the world a safer and more peaceful place,” Trump said. “We must also make a deal that allows Iran to thrive and prosper, and take advantage of its enormous untapped potential. Iran can be a great country.”
The situation on the ground remained volatile, however. The array of mostly Shiite Muslim militias known as the Popular Mobilization Forces lost their deputy chairman Abu Mahdi al-Muhandis along with other officials in the same operation that killed Soleimani and lost up to 27 fighters a week earlier in U.S. strikes retaliating to a rocket attack that killed a Pentagon contractor.
The Popular Mobilization Forces, whose leaders hold influential positions within the government, successfully pushed Baghdad’s parliament to vote in favor of facilitating a U.S. withdrawal from Iraq. While caretaker Iraqi Prime Minister Adel Abdul-Mahdi endorsed the measure, Trump said Tuesday, prior to the Iranian strikes, that now was “not the right time” to leave.
Iranian President Hassan Rouhani and the Revolutionary Guard have called on the U.S. to withdraw all of its troops from the region. Abdul-Mahdi on Wednesday called for de-escalation on both sides following the attacks and reiterated he would not allow his country to become a battleground between the U.S. and Iran.