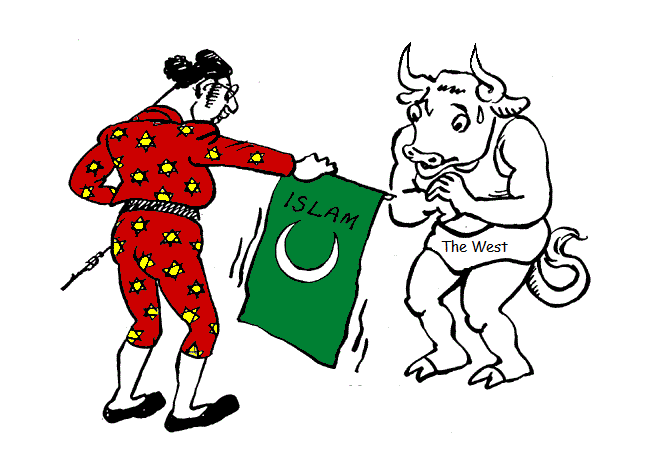 ed note–there is nothing, or at least should be nothing, considered ‘new’ about this information.

Even before the tectonic shifts taking place immediately following the Israeli-engineered terrorist attacks on 9/11, the various members of organized Jewry, some of them listed in this report, were at work like the obedient little gears that they were/are in poisoning the Gentile mind against Islam with untruths, half-truths, contortions, and anything else they could come up with as part of their ‘by way of deception, we shall make war’ credo.

What’s worse are those non-Judaic elements, and most notably within the ‘religious right wing’ in America who took the bait WHOLE HOG, too stupid to see that the ‘anti-Islamic conspiracy’ on the part of Judea, Inc was in fact a 2-sided coin that had contained within it as well an ‘Anti-Christian conspiracy’ aimed at pitting the 2 religions against each other until at the end of it, Israel and Judaism would be the only entities left standing.

AND WHAT’S EVEN WORSE IS THE FACT THAT as of this very moment, these same ‘right wing religious’ elements (and even those ‘right wing’ elements that are not ‘religious’ that includes the now-infamous ‘white nationalists’) STILL DO NOT RECOGNIZE THIS FACT 20 years later and in fact are found cooperating with those organized Jewish elements seeking the destruction of white Christian civilization by pandering to/passing around the propaganda vomited out of the mouths of those very same Judaic elements listed in this report.

Charitable foundations with ties to Jewish federations and Jewish families feature prominently in a new report about the flow of tax-deductible donations to organizations identified as ‘anti-Muslim groups.’

Titled ‘Islamophobia in the Mainstream,’ the report was published Tuesday and, using publicly available IRS data, analyzed the 50 charitable foundations that had topped a list of some 1,100 anti-Muslim funders identified in a previous report from 2019.

Among the foundations examined in the new report, 35 were found responsible for roughly $106 million in payments from 2017 to 2019 to 26 groups deemed harmful to Muslims. The figure is lower than in previous years but still indicates that funding for Islamophobia is alarmingly mainstream, according to CAIR, a Muslim advocacy group.

At least five funders on the list are explicitly Jewish while several others are private family foundations also known for supporting Jewish and Israeli causes.

The five are donor-advised funds affiliated with Jewish federations in New York, Boston, Los Angeles, and the San Francisco Bay Area. These funds collect donations from individuals, providing an immediate tax write-off and dispersing money according to donor recommendations. The donors remain anonymous.

Meanwhile, the Adelson Family Foundation, established by the late casino magnate Sheldon Adelson and his wife, made the list along with the Irving I Moskowitz Foundation, the Helen Diller Family Foundation and other entities with a focus on the U.S. Jewish community and Israel.

The Jewish groups appear alongside Christian Advocates Serving Evangelism, which topped the list, and donor-advised funds run by major Wall Street firms such as Fidelity and Schwab.

The prevalence of Jewish-linked funders appears connected to their support for certain hawkish and right-wing groups with a pro-Israel agenda that in CAIR’s view promote Islamophobia.

One of those groups is the Committee for Accuracy in Middle East Reporting in America, or CAMERA, which received more than $4 million in grants, according to the report. Billing itself as a media watchdog fighting Israel bias, CAMERA has made the claim that several Muslim American organizations act as front groups for terrorists.

Other examples include the David Horowitz Freedom Center, which engages in ‘anti-Muslim media lobbying and misinformation,’ and the American Freedom Defense Initiative, led by activist Pamela Geller and known for ‘racist public ad campaigns’.

CAIR itself has been accused of allowing its advocacy to veer into the realm of bigotry, with Anti-Defamation League CEO Jonathan Greenblatt accusing a CAIR leader of ‘textbook antisemitic conspiracy-laden garbage’ in December. Zahra Billoo, director of CAIR’s San Francisco office had said in a speech that pro-Palestinian activists should oppose ‘polite Zionists’ just as they would right-wing extremists. The speech earned widespread rebuke from Jewish leaders like Greenblatt.

The flow of funding in the nonprofit world has come under intense scrutiny in recent years with accusations like CAIR’s that tax-deductible donations are boosting hate groups and extremists. Concern over the issue has reached a crescendo following the Washington, D.C. rally on Jan. 6, 2021, that turned into an attack on the U.S. Capitol in an attempt to overturn the results of the recent presidential election. Since the rally, journalists, watchdog groups and lawmakers have been investigating the financing behind the event.

In a press release announcing the report, CAIR echoed calls to beef up controls on where donations can go.

‘Today, more than ever, the philanthropic community must establish clear policies to prevent funds from going to hate groups and implement educational initiatives for staff and board members to help them understand the extent of anti-Muslim bigotry,’ CAIR’s national research and advocacy coordinator Huzaifa Shahbaz said in a statement.