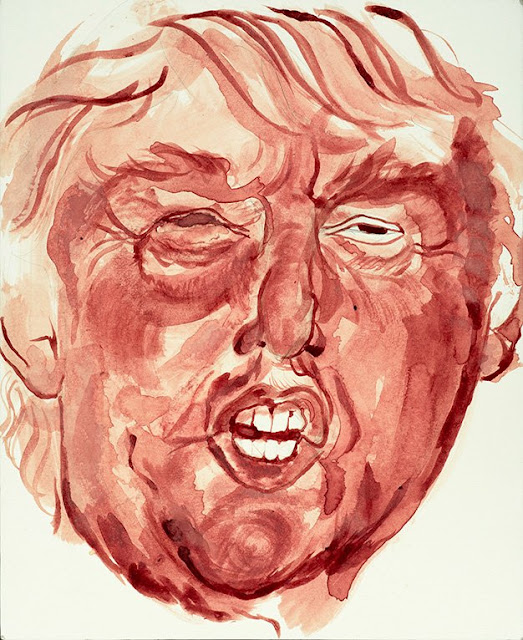 Unstable and impeached, the president pushes the U.S. toward war with Iran.
ed note–As discussed previously, there are several possibilities associated with this latest event–
1. As already noted, the possibility that in fact Soleimani was not killed but extracted for info and intelligence purposes. Please recall that as of this moment, the only ‘proof’ we have that he was in the car blown up by American drones is a severed hand with a ring known to be his on one of the fingers, a circumstance similar in many respects to the ‘magical passport’ owned by Mohammed Atta that was ‘found’ atop the burning rubble of the Twin Towers ‘proving’ that he was one of the hijackers on the morning of 9/11.
2. That this was a ‘Deep State’ set-up in order to goad DJT, POTUS into doing something that could then be used as prima facie evidence of his ‘instability’ at the very moment that the US Senate takes up the business of an Impeachment trial that was the handiwork of 2 high-level Israeli operatives in the HoR–Jerald Nadler and Adam Schiff.
Whatever the real ‘back story’ is on this, it is obvious that Judea, Inc intends to make the most of it in attempting to burn down and destroy the Trump White House, and no, it’s not just a ‘hoax’ as certain simpletons like to imagine. The NeoCons who pushed the ‘go’ button on WWIII on the morning of 9/11 understood from the moment that Trump announced his candidacy for President the threat that he posed to their plans of universal J-armageddon and have been furiously at work since that time in attempting to render him null and void.
Not wanting to say ‘we told ya so’, but indeed, ‘we told ya so’, and similar to our warnings regarding all the nuttery of the ‘Sandy Hook Hoax’ nonsense and where it was all sure to end up, likewise with our warnings not to side up with the NeoCons in their drive to destroy a presidency intent upon ending America’s involvement in the wars conjured up by Judea Inc, as we are now seeing the terrible fruits of all of this that only portend the most serious danger to us all.

Michelle Goldberg, NY Times
There are no more adults in the room.
After three harrowing years, we’ve reached the point many of us feared from the moment Donald Trump was elected. His decision to kill Maj. Gen. Qassim Suleimani, Iran’s second most important official, made at Mar-a-Lago with little discernible deliberation, has brought the United States to the brink of a devastating new conflict in the Middle East.
We don’t yet know how Iran will retaliate, or whether all-out war will be averted. But already, NATO has suspended its mission training Iraqi forces to fight ISIS. Iraq’s Parliament has voted to expel American troops — a longtime Iranian objective. (On Monday, U.S. forces sent a letter saying they were withdrawing from Iraq in response, only to then claim that it was a draft released in error.) On Sunday, Iran said it will no longer be bound by the remaining restrictions on its nuclear program in the Joint Comprehensive Plan of Action, the deal that Trump abandoned in 2018. Trump has been threatening to commit war crimes by destroying Iran’s cultural sites and tried to use Twitter to notify Congress of his intention to respond to any Iranian reprisals with military escalation.
The administration has said that the killing of Suleimani was justified by an imminent threat to American lives, but there is no reason to believe this. One skeptical American official told The New York Times that the new intelligence indicated nothing but “a normal Monday in the Middle East,” and Democrats briefed on it were unconvinced by the administration’s case. The Washington Post reported that Secretary of State Mike Pompeo — who last year agreed with a Christian Broadcasting Network interviewer that God might have sent Trump to save Israel from the “Iranian menace” — has been pushing for a hit on Suleimani for months.
Rather than self-defense, the Suleimani killing seems like the dreadful result of several intersecting dynamics. There’s the influence of rapture-mad Iran hawks like Pompeo and Vice President Mike Pence. Defense officials who might have stood up to Trump have all left the administration. According to Peter Bergen’s book “Trump and His Generals,” James Mattis, Trump’s former secretary of defense, instructed his subordinates not to provide the president with options for a military showdown with Iran. But with Mattis gone, military officials, The Times reported, presented Trump with the possibility of killing Suleimani as the “most extreme” option on a menu of choices, and were “flabbergasted” when he picked it.
Trump likely had mixed motives. He was reportedly upset over TV images of militia supporters storming the American Embassy in Iraq. According to The Post, he also was frustrated by “negative coverage” of his decision last year to order and then call off strikes on Iran.
Beyond that, Trump, now impeached and facing trial in the Senate, has laid out his rationale over years of tweets. The president is a master of projection, and his accusations against others are a decent guide to how he himself will behave. He told us, over and over again, that he believed Barack Obama would start a war with Iran to “save face” and because his “poll numbers are in a tailspin” and he needed to “get re-elected.” To Trump, a wag-the-dog war with Iran evidently seemed like a natural move for a president in trouble.
It’s hard to see how this ends without disaster. Defenders of Trump’s move have suggested that he might have re-established deterrence against Iran, frightening its leadership into restraint. But Vali Nasr, a Middle East scholar at Johns Hopkins University and former senior adviser to Obama’s State Department, tells me that Iran likely believes that it has to re-establish deterrence against the United States.
“If they don’t do anything, or if they don’t do enough, then Trump will get comfortable with this kind of behavior, and that worries them,” said Nasr. To Iranians, after all, America is the aggressor, scrapping a nuclear agreement that they were abiding by and imposing a punishing “maximum pressure” sanctions campaign. Just like militarists in the United States, they’re likely to assume that weakness invites attacks. “I don’t think they want to provoke war, but they do want to send a signal that they’re prepared for it,” said Nasr.
Even if Iran were to somehow decide not to strike back at the United States, it’s still ramping up its nuclear program, and Trump has obliterated the possibility of a return to negotiations. “His maximum pressure policy has failed,” Nasr said of Trump. “He has only produced a more dangerous Iran.”
Meanwhile, ISIS benefits from the breach between Iraq and America. “ISIS suicide and vehicle bombings have nearly stopped entirely,” said Brett McGurk, who until 2018 was special presidential envoy to the coalition fighting ISIS. “Only a few years ago, there were 50 per month, killing scores of Iraqis. That’s because of what we have done and continue to do. These networks will regenerate rapidly if we are forced to leave, and they will again turn their attention on the West.”
Unlike with North Korea, it’s difficult to imagine any photo op or exchange of love letters defusing the crisis the president has created. Most of this country has never accepted Trump, but over the past three years, many have gotten used to him, lulled into uneasy complacency by an establishment that has too often failed to treat him as a walking national emergency. Now the nightmare phase of the Trump presidency is here. The biggest surprise is that it took so long.