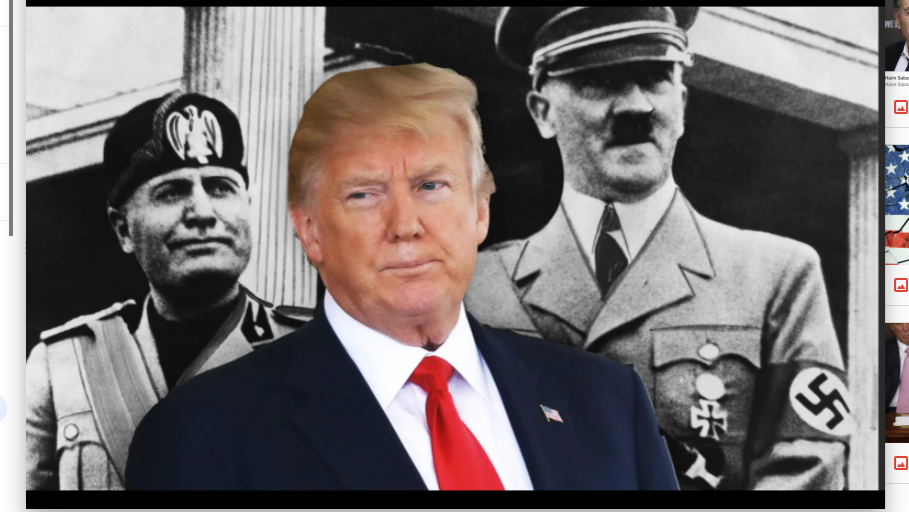 ed note–Again, keep in mind as you read this that the author of this piece is none other than Max Boot, a spy for Israel whose sole purpose is to sedate and sodomize the American mind through the use of Judaic verbal black magic in order to keep the Armageddon train barreling down the road towards America’s destruction via the ‘never-ending wars’ which DJT POTUS has vowed to end.

It is not simply the casting of ballots that makes a democracy. Many dictatorships have faux elections that change nothing. The real test of a nation’s political system is whether politicians respect the will of the voters — and in particular whether the most powerful leader, the one in control of the armed forces, willingly gives up power after losing an election. This is a test that countries such as Belarus and Zimbabwe have failed, and that the United States has passed, in good times and bad, for more than two centuries. Indeed, few presidents are even asked about their willingness to give up power because the answer is so obvious.

That is no longer the case. Asked on Wednesday whether he would commit to a “peaceful transfer of power,” President Trump did not say yes. He said: “Well, we’re going to have to see what happens.” He then said we should “get rid of the ballots” — presumably he meant mail-in ballots, but it wasn’t clear — and then ended with these chilling words: “There won’t be a transfer, frankly. There’ll be a continuation.”

This is how the dictators that Trump so admires speak. “It’s funny, the relationships I have, the tougher and meaner they are, the better I get along with them,” he told Bob Woodward. “You know? Explain that to me someday, okay?” It’s not funny, it’s frightening, and the explanation is obvious: Trump shares with men like Russia’s Vladimir Putin and Turkey’s Recep Tayyip Erdogan a contempt for the democratic process.

No U.S. president has said anything like this before. Ever. This by itself should be disqualifying. Even if Trump had been the best president in our history — rather than the worst — this refusal to play by the democratic rules should, all by itself, guarantee his electoral defeat.

But, of course, it won’t, because over the past four years we have all become habituated to having Trump erase one red line after another. Indeed, he also refused in 2016 to say that he would recognize the legitimacy of the election. But it is far more ominous for an incumbent than a challenger to talk like a tyrant.

As Barton Gellman lays out in the Atlantic, Trump’s talk has a purpose. He is claiming that mail-in ballots will be fraudulent not because any evidence of fraud exists. He is doing so because Democrats in recent years have had a big advantage in ballots that are counted after Election Day. In 2018, Republican Martha McSally was ahead in the Arizona Senate race on election night but lost after all the ballots were counted.

This year the “blue shift” is certain to be even bigger, with more people voting by mail than ever before — and more Democrats than Republicans expressing a desire to do so. By calling the mail-in ballots a “hoax,” Trump is laying the foundation for throwing them out and demanding that he be declared the winner based on ballots counted on election night.

I was part of Team Trump in an election “war game” run by the Transitional Integrity Project, and we urged Republican-controlled legislatures to certify slates of electors pledged to Trump even in states that Biden won on the grounds that the vote was tainted by fraud. This is anti-democratic but legal: The Constitution provides that each state shall appoint electors “in such Manner as the Legislature thereof may direct.” Gellman reports that the Trump campaign is already “discussing contingency plans to bypass election results and appoint loyal electors in battleground states where Republicans hold the legislative majority.”

Trump’s eagerness to confirm a Supreme Court justice before the election is based, in no small part, on the assumption that the outcome of the vote will be adjudicated. “I think this will end up in the Supreme Court. And I think it’s very important that we have nine justices,” Trump said on Wednesday. Trump is seeking to hold on to power any way he can.

This is the stuff of nightmares. Already social scientists warn that we may be backsliding into autocracy. Now we may be facing the worst threat to our democracy since the 1930s — the period that is the setting of the dystopian novels “It Can’t Happen Here” and “The Plot Against America.” It can happen here, and the plot against America has already been set in motion by a real-life analog to Berzelius “Buzz” Windrip or Charles Lindbergh.

The Republican Party is unlikely to restrain Trump’s authoritarian instincts. While Senate Majority Leader Mitch McConnell (R-Ky.) pledges that “the winner of the November 3rd election will be inaugurated on January 20th,” the GOP will do everything possible to ensure that Trump is certified as the winner — even if he should rightfully lose not only in the popular vote but in the electoral college, too.

The only way to avoid the worst election crisis since 1876 is for Joe Biden to win by a landslide on Election Day. Anyone who cares about the fate of American democracy should pray that this is what happens.