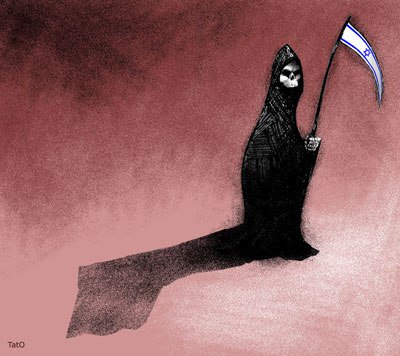 ed note–And, here we go again ladies and Gentile-men with YET ANOTHER glaring example as to WHY there has been the ear-splitting seek-and-destroy mission against a certain DJT by Organized Jewish Interests, loud-as-a-hurricane political situation that despite it noise seems to have escaped the notice of an entire gaggle of experts and geopolitical anal-ists, and even when this very plain-to-see/easy-to-understand truth has been sitting there as an open, festering volcano now for over 5 years.

The moment that then ‘candidate’ Trump announced his plans for resolving the ‘never-ending’ Israeli/Palestinian conflict and of ending the ‘never-ending wars’ into which the US willingly allowed herself to be dragged following the Israeli-engineered terrorist attacks of 9/11, he became–IN A MANNER VERY LOUD AND VERY CLEAR–a declared ‘Enemy of Zion’. Anyone boasting of their political acumen who somehow missed the endless wall of noise that has been generated in this regard for the last 5 years, emanating out of a mainstream media mafia owned whole-hog/lock, stock, & barrel by Organized Jewish Interests simply doesn’t possess the minimum intelligence/attention span necessary to competently pour water out of a boot while reading the directions for doing so on the heel.

Having said this, let us then pull-apart/de-construct some of the strands of the spider’s web which our ‘nice Jewish girl’ has woven for the purposes of capturing and then devouring the Gentile mind and figure out exactly what it was/is about Joe Biden that led to his OVERWHELMING support on the part of Judea, Inc, both from those organized Jewish interests operating in an in-your-face-manner (the mainstream media mafia) and those operating behind the scenes, such as Netanyahu & co.

1. First and foremost, what needs to be understood is the following–

ISRAEL DOES NOT WANT PEACE.

What she wants is the fulfillment of what she has planned from the beginning of this entire ‘Jewish state’ project, which is the entirety of the Middle East from the Nile to the Euphrates rivers as spelled out in Kristol-clear language within not only the Torah (Old Testament), but as well by Theodore Herzl himself and even Israel’s first Prime Minister, David Ben Gurion, and the only way of achieving that ‘Nile to Euphrates’ real estate deal is through the mechanism of–

Having said this, what must be understood as well is that Israel–through her various political leaders and spell-casters such as Mz. Gelman–cannot state in plain words her lust for war in Kristol clear terms, because the ENTIRE FOUNDATION upon which the entire Jewish state paradigm is based is one of Jewish victimhood and the desire on the part of ‘God’s chosen people’ to simply live ‘in peace’, Judaic wordsmithing and sleight of hand that is taken right out of Mossad’s ‘by way of deception, we shall make war’ playbook.

2. Notice what our spell-caster says very early on in her piece–

‘Previous American presidents have entered office with ambitious plans for peace negotiations between Israelis and Palestinians.’

This is a fact, but one about which unfortunately far-too people are aware, and it has been these ‘ambitious plans’ for bringing ‘peace’ between the pirates of Judea and their Ishmaelite victims responsible for destroying several previous administrations and which is solely responsible for all the political/social/economic instability in Donald Trump’s America right now.

Trump may have been on the receiving end of WHAT APPEARED TO BE applause from Netanyahu for his ‘peace deal’, but this is what Israeli politicians do–smile and behave cordially to US Presidents when the cameras and mics are hot but whose footsoldiers in the meantime are operating behind the scenes in working against that President.

Netanyahu does not want Trump’s ‘Deal of the Century’ anymore than he wanted those peace deals brought forth by Nixon, Ford, Carter, Reagan, GHWB or Clinton. What Netanyahu wants is Eretz Israel HaSchlema–‘Greater Israel’ from the Nile to Euphrates’ and absolutely NO PALESTINIAN STATE, just as he has stated on occasions too numerous to count.

In sum, every single ‘position’ laid out by our spell-caster Gelman are those ‘protocols’ that have been used in the past to chew away, bit by bit, firstly historical Palestine, and then, once that task is complete, to begin the process of eating up Syria, Lebanon, Jordan, etc, etc, etc, until everything from the ‘N2E’ is officially ‘Israel’, exactly as Judaism dictates and commands.

Susie Gelman, Board Chair of The Israel Policy Forum

President-elect Joe Biden’s most immediate priorities on the Israeli-Palestinian conflict are reconstructing what the Trump administration has ‘torn asunder’.

Previous American presidents have entered office with ambitious plans for peace negotiations between Israelis and Palestinians, but President-elect Joe Biden and Vice President-elect Kamala Harris will be working from a different baseline.

Donald Trump’s four years in office saw the implementation of harmful policies that upended longstanding American positions on the Israeli-Palestinian conflict, causing Washington’s relationship with the Palestinians to break down completely and bringing U.S. foreign policy into dangerous alignment with the expansionist vision of the Israeli right.

Broadly speaking, President-elect Biden will need to reset American policies with three objectives in mind: dialing back tensions between Israelis and Palestinians, restoring the U.S.-Palestinian relationship, and reinforcing clear tenets undergirding a future peace agreement, even if the new administration does not prioritize actually pursuing one.

Israeli-Palestinian relations reached their nadir over the summer after the release of the Trump plan, which endorsed West Bank annexation. Palestinian Authority President Mahmoud Abbas then finally followed through on an oft-repeated threat to suspend security cooperation with Israel, making policing and counter-terrorism efforts in the West Bank more difficult. The Palestinians also ceased accepting tax revenue transfers from Israel, leaving the PA on a precarious financial footing.

Reports abound of Palestinian security personnel donning civilian clothes to buy fuel for their vehicles in areas where Israel does not normally permit PA forces or leaving their uniforms at their offices for fear of reprisals from relatives and neighbors. Thousands of Palestinian civil servants are enduring significant salary cuts.

This situation raises the potential for uncontrolled escalation between the two sides, with little hope for deconfliction. The Biden administration will need to provide the Palestinians a dignified way of walking back from this cliff.

Other options, such as inviting the PLO to reopen its mission in Washington, are presently blocked by the 2019 Promoting Security and Justice for Victims of Terrorism Act, but should be kept in mind as the new administration works with Congress. The Biden administration could also resume support for the Palestinian Authority’s security and intelligence forces, which, unlike some other forms of aid in the West Bank and Gaza, is not impacted by the Taylor Force Act.

But it’s not just the leadership in Ramallah that will need help: the Palestinian people have also suffered greatly under the Trump administration, which cut all aid to the West Bank and Gaza, including humanitarian assistance completely unrelated to the activities of the Palestinian Authority and Hamas.

Like many developing societies, the Palestinians receive American aid, and the outgoing administration’s actions were not only cruel and punitive but deprived the United States of important leverage with the PA. The cuts even extended to entities explicitly excluded from the Taylor Force Act, such as hospitals in East Jerusalem which are outside of the PA’s jurisdiction.

The Partnership Fund for Peace Act, recently enacted with bipartisan support, restores about $50 million in assistance in the area of people-to-people exchanges. While important, this represents only a fraction of the funding cut by the Trump administration, which impacted every facet of aid previously provided to the Palestinians, including all support for USAID in the West Bank and Gaza as well as support for UNRWA.

The Biden administration should seek to restore the humanitarian aid which was slashed on the outgoing president’s watch.

Then there is the issue of revisiting the political vision behind U.S. policy toward Israel and the Palestinians. Although a comprehensive peace deal seems more elusive than ever, the Biden administration could establish basic parameters for an eventual agreement that would generally conform to the principles set forth by Presidents Bill Clinton, George W. Bush, and Barack Obama.

Even if no serious direct Israeli-Palestinian negotiations take place in the next four years, such steps could go a long way towards signaling to Israel and the Palestinians that the Trump administration’s support for annexation under the Peace to Prosperity proposal is no longer U.S. policy.

In spite of his generally poor record, President Trump did produce one significant foreign policy achievement: supporting normalization between Israel and other Arab states. President-elect Joe Biden has already expressed his support for these advances, and he will likely seek to build upon his predecessor’s progress when he enters office.

That being said, the manner in which President Biden will pursue these efforts may necessitate some adjustments. President Trump rewarded Arab states for opening up to Israel with benefits such as the pending sale of advanced F-35 stealth fighter jets to the UAE. This transactional approach has sparked fears of an arms race in the Middle East, and was only begrudgingly and belatedly accepted by Israeli officials after weeks of mixed signals from Jerusalem.

The Biden administration may seek to reassess what the Trump White House put on the table for normalization and ensure that future incentives for additional normalization agreements do not compromise regional stability or American and Israeli security interests.

The Biden administration’s most immediate priorities on the Israeli-Palestinian conflict will primarily amount to reconstructing what the Trump administration has torn asunder. Given the scope of the damage inflicted over the past four years, the task of rebuilding will be just as important as any far-reaching peace proposal.