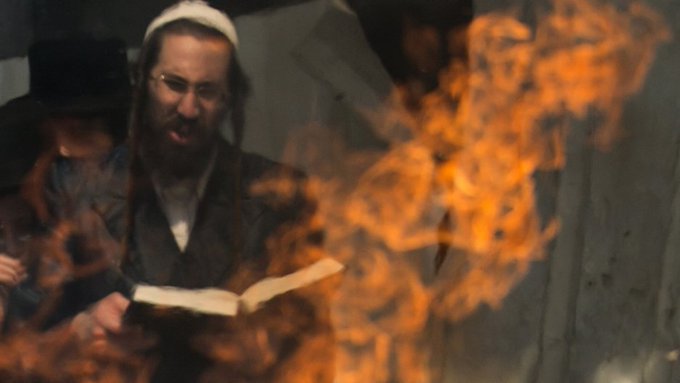 The Constitution of the People of Israel is the Torah – but what does that mean?

ed note–we’ve said it before and we’ll continue saying it again and again–Judaism is a mental disorder with geo-political and apocalyptic dimensions associated with it and as such, DEMANDS that a rational, thorough and scientific-method based study of its nature and properties take place. As events are proving at the very moment of this writing, it is every bit as much a dangerous force to the continued existence of the human race and a negative force upon on human affairs as the black death was during the Dark Ages.

As such, the study/understanding of this problem requires that thinking people render correct diagnoses of this problem unencumbered by any religious or emotional sentimentality and who otherwise pull their punches in correctly diagnosing the nature of the disease out of fear of being declared heretics or schismatics.

THAT BEING THE CASE, there exists an entire industry of writers, thinkers, cogitators, commentators, eks-purts and self-declared geniuses of varying shape, size and specie whose ekspurt-eez is writing, thinking, cogitating and commenting upon the ‘JQ’ and all the problems it causes, and yet, who do indeed pull their punches when it comes to telling the truth, the whole truth and nothing but the truth so help them God, when it comes to analyzing the ‘beating heart’ of this monster, which is in fact the Torah, or ‘Old Testament’ as it is known to those of the Christianite variety. Like chirping birds they spew the nonsense that the Torah is a ‘godly’ book, as pure as the wind-driven snow and just as holy and divine as the New Testament which brought forth the good news of Jesus Christ. They go further in their delusion by stating that the followers of today’s Judaism have eschewed and rejected the holiness of their Torah in favor of the Talmud and that in fact all the problems associated with the ‘JQ’ today would evaporate in an instant if ‘real Jews’ would just abandon their terrible Talmud in favor of the Torah.

All the above (and more) is easily proven categorically false with just a brief examination of what appears in the Jewish press on a daily basis, where it appears in easy to read, easy to understand, black and white language that the terrible Talmud is but an EXTENSION of the core teachings of the Torah and the ‘how-to’ book in implementing those 613 rules making up ‘THE LAW’ as it appears in the 5 books of Moses, otherwise known as the Torah.

Now, as much as all of this appears to be hair-splitting, in reality it isn’t. As we stated in the very first sentence of this ed-note commentary, Judaism is a MENTAL DISEASE/DISORDER that carries with it geo-political and apocalyptic dimensions and as such, DEMANDS that a rational, thorough and scientific-method based study of its nature and properties take place.

Therefore, when one of its victims, in this case a deranged Judaic living in Israel, states that the ‘constitution’ for this deranged and dangerous political state was already written thousands of years ago, the Gentile world needs to sit up, take notice and understand it on its own terms without the miasma of any religious or emotional sentimentality, and particularly when that same Torah outlines the creation of a theocratic terrorist state with a blank check for enslaving the entire world, and if necessary, mass-murdering through whatever means available those millions or even BILLIONS who resist the demands of that dangerous and deranged theocratic terrorist state.

I wrote in a previous article that Israel already has a Written Constitution which its people accepted wholeheartedly and in unison before God. That Constitution is our Written Torah. What does that mean?

Most people would not consider the Torah a constitution. When I say Torah in this article, I am referring to the Books of Moses, the Pentateuch, and not the rest of the Jewish Oral Law (Halachah). This distinction is important, because the Torah is the basis of everything Jewish, the foundation of all those later rulings and recordings, if you will. As such the Torah is the source and defining Text of Israel and Jewish identity.

Yet most people would not consider the Torah a constitution, for it lacks the defining qualities of other constitutions. It does not specify the form of government, authorizing and defining its various branches. It mentions a civil and military hierarchy (Exodus 18, Deuteronomy 1:9-18) with a council of elders (Numbers 11:10-25), and Commands the establishment of courts (Deuteronomy 16:18-20, 17:8-13), but it lacks the coherence and details necessary to properly structure and constrain a functioning government.

All these forms of government could theoretically coexist with the Torah, given the proper constraints, because the Torah is not interested in human organizational structures. According to the Torah, God is the Supreme Authority and we, as His Chosen people, are all subject to Him and His Commandments. How we organize ourselves as a nation is of lesser importance, so long as we make certain to keep and uphold the Torah as a nation.

The Torah states in very clear language that nothing may be added to it and nothing subtracted (Deuteronomy 4:2, 5:28-29, 8:1, 13:1). When using the Torah as a Constitution, this means that it is a permanent one and it cannot be amended. Additional information may be deduced from it and additional instructions are attributed to God in the rest of the Jewish scriptures, but these are clearly external to the Torah itself and cannot be added to it.

Interpretation of the Torah, including court rulings based upon it, are of an even lower order than prophecy and rational deduction, and therefore, clearly, cannot be added to the Torah and cannot abrogate it. Which is why I make a clear distinction between the Torah and the Halachah, and even the rest of Jewish scripture. No one would tolerate adding words from the Talmud or the Books of Prophets to the Books of Moses, that is strictly forbidden, and the same reasoning applies to the Torah as a Constitution.

As a Constitutional Document, though, I think it is fair to say that the Torah is long and confusing. The individual Commandments have clear literal meanings, but when considered in their context and in relation to the greater whole, as well as contemplating their deeper meanings and practical applications, the words begin to lose their clarity. For this reason, I think, in an improved constitutional form, it helps to focus only on the Commandments, and to regroup those passages in an organized and orderly fashion, for easier access and reference. For example, having criminal law in one section and tort law in another.

The Torah contains many spheres of Law, serving as a table of contents or as the foundation for an entire legal codex which the government needs to legislate. Other constitutions do not have this, which makes them inferior in my opinion, and we do not need to emulate them. The Torah containsdivine knowledge, and with it the confidence to set certain Norms in stone, so that the government cannot alter them. That is the primary role of a constitution.

We were molded into a nation with this Torah, imbued by it with the Breath of God; it became the soul of our nation, and it has defined us ever since. It will forever define us as a nation, and there is no escaping it, because the Torah is our Eternal and primary constitution.