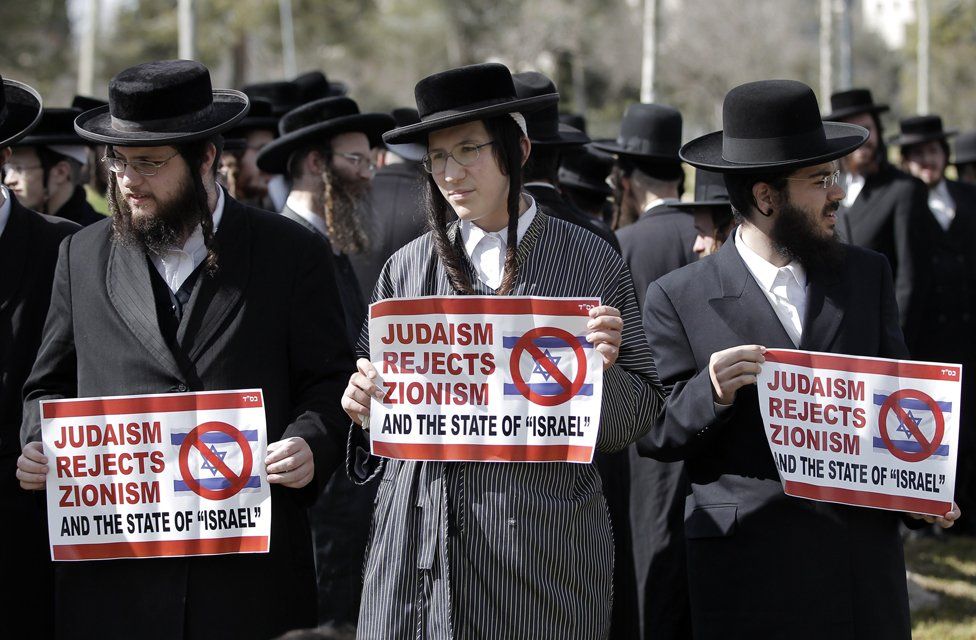 ed note–as we like to point out here often, the entire ‘Joo-dsm ain’t Zy-nsm’ nonsense, as popular as it may be, is a LIE, deliberately plied by the organized forces of anti-Gentilism to confuse ‘the goy nations’ as to the exact nature of what the problem is, a Kristol clear fact to those who bother to spend as much as a mere 5 seconds reading the ‘holy of holies’ that functions as the beating heart of Judaism, the Torah (Old Testerment) which spells the matter out in black and white terminology and in the simplest of terms, to wit–

On that day the LORD made a covenant with Abraham, saying ‘To your descendants I give this land, from the river of Egypt to the great river Euphrates…–Genesis, 15:18

Not many Jews today recall a 19th-century Jewish leader who wrote a booklet that inspired young Jews to move to the Land of Israel. The man at first believed passionately in assimilation as an answer for Jews and later, due to what he saw as rising anti-Semitism, advocated a new idea that eventually became known as Zionism. He himself met with notables all over Europe to advance his plans. The booklet made an impact and led to his chairing a movement that convened a groundbreaking convention of Jews who came from all over Europe to speak about practical ways to spark a mass Return to Zion.

If you are thinking the man was Theodor Herzl, the book was The Jewish State (1896), the convention was the First Zionist Congress, and the movement was the World Zionist Organization, you are wrong.

This Jewish leader died five years before Herzl wrote The Jewish State, his name was Leon Pinsker and this year is the bicentennial of his birth. Pinsker’s booklet was entitled Auto-Emancipation: A Warning from a Russian Jew to His Brothers and was published in 1882. The 1881 pogroms that followed the assassination of Tsar Alexander II had caused Pinkser, a physician, to rethink his dedication to the idea that assimilation was the best hope for the Jews of Russia. He was recruited to the Hibbat Zion (Fondness For Zion) movement and chaired its 1884 conference in Katowice, the result of which was that the various parts of the movement united as Hovevei Zion (Lovers Of Zion).

There was a time when anyone who was an educated Zionist knew who Pinsker was, had familiarity with his ideas, and understood the importance of Hovevei Zion to Zionist history. Over the years, the Zionist narrative became simplified and little room was left to recall those who came before Herzl and, as a result, we have nearly lost part of our heritage.

Beyond simply correcting the record and restoring Pinsker’s place in the history of Zionism, there is much to be learned from his work that has serious implications for what Zionism was, is now, and can be.

British Chief Rabbi Immanuel Jakobovits, in his book If Only My People….Zionism In My Life, stressed Pinsker’s importance–

Political Zionism was born and sustained out of negative factors: the intolerable conditions of Jewish homelessness. Pinsker’s Auto-Emancipation (1882) was sparked by the Russian pogroms in 1881. The seeds of Herzl’s Judenstaat were planted at the Dreyfus trial in Paris, and even Jabotinsky was only converted to Zionism at the age twenty-three by the Kishinev pogrom in 1903.

The eminent historian, Walter Laqueur, in his A History of Zionism, labeled Pinsker’s book ‘a milestone in the development of Zionist thought.’

What was Pinsker’s movement really like and what did it stand for?

Jewish unity was a key idea of the Hovevei Zion. Their Katowice conference brought together less than three dozen delegates but they traveled from France, Britain, Germany, Russia, and Romania to attend. What’s also important to note is that the delegates included numerous Orthodox rabbis who had central roles in the movement. Pinsker was not observant and yet, they all found common ground and strived to work together.

It is a misrepresentation of the facts of history to state that the Zionist movement was a secular movement and that Orthodox rabbis opposed early Zionism. But all too often that is what we are told. In reality nothing could be further from the truth, for it is simply impossible to understand the early development of modern Zionism without studying the ideas, activism, and impact of influentail 19th century rabbis such as Rabbi Tzvi Hersh Kalischer, Rabbi Yehuda Alkalai, and Rabbi Shmuel Mohilever.

Part of the organizing that Pinsker and his colleagues did was generating direct financial support for the new Jewish communities that were already in development throughout the Land of Israel in the last several decades of the 1800s.

The Israel bashers of our time continue to promote the slander that if it were not for the Holocaust then there would be no Israel.

Pinsker and his colleagues put the idea of the Return to Zion into the consciousness of European Jews so that when Herzl arrived on the scene there was already something serious to work with. The first agricultural school in pre-state Israel was built in what is now the Tel Aviv area. It was called Mikveh Israel and it was founded in 1870, even though Tel Aviv itself would not be founded until nearly 40 years later in 1909.

Throughout the era, Jews had to contend with laws that the Ottoman Turks enacted that prohibited Jews from buying property. If it were not for these immoral laws, who is to say that millions of Jews would not have left Europe for Jerusalem, the Galilee, Hebron, and the Tel Aviv area before Hitler ever came to power?

Despite the challenges to obtain real estate, and many other obstacles, the early Zionist pioneers blazed a solid path. And that perhaps is the single most important lesson to learn from Pinsker and his contemporaries, in addition to the vital need for Jewish unity, however serious the challenges may be, Zionist work must go on.