ed note–and once again, ladies and Gentile-men, please take VERY CAREFUL note of the particular ‘pedigree’ associated with this OpEd– 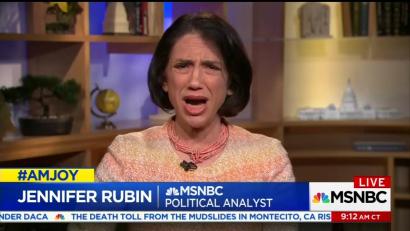 Jennifer Rubin, not JUST someone of the Hebraic persuasion, but a died-in-the-wool NEOCON, the very same group of people who ‘gifted’ America not only with the worst terrorist attacks in history, but as well, the ‘Clash of Civilizations’ aimed at destroying both the Islamic and Christian worlds per Israel’s demand.

She–along with the rest of the NEOCON cabal, including Bill Kristol, Robert Kagan, David Frum, Eliot Choen, Max Boot et al, are engaged in an intelligence operation being run out of Israel aimed at ‘regime change’ in America in seeing yet another Zionist puppet-president installed who will do Israel’s bidding viz never-ending wars in the Middle East as opposed to a President who has decided to do a 9/11 U-turn.

Recall that she had no similar commentary about Americans ‘believing rubbish’ when she and the rest of her coven were spinning lies about Iraq’s ‘WMDs’ and about Islam taking over the world and all the rest.

As we like to point out here often, but which unfortunately is not taken seriously by enough people,

Don’t expect Limbaugh, Hannity, Carlson or any of the others to bring this particular piece of the puzzle into the discussion, because they simply CAN’T if they wish to remain employed. Dittoes with many/most ‘experts’ within the ‘9/11 Trooth Mooovmnt’ who are now counted as aiders and abettors of the Neocons in having helped bring about the current situation all are facing with their idiotic and one-dimensional ‘analysis’ that only added fuel to the NeoCon fire.

A spate of surveys shows a significant majority of Americans (maybe 60 percent, a couple of polls report) thinks President-elect Joe Biden won the election. (This is akin to “What color is George Washington’s white horse?”) That means 40 percent or so of Americans are utterly deluded. And with a new appreciation for the inexactitude of polling, it’s possible the portion of Americans who accept Biden’s victory is anywhere from 70 percent to only 50. (Republicans could simply be out to annoy pollsters; on the other hand, pollsters have proved themselves ineffective at sampling enough of the MAGA crowd.)

Regardless, the answer to “How many Americans believe in a baseless conspiracy that the election was stolen?” is “Too many.” In all likelihood, millions upon millions of people believe in something as silly as the idea that UFOs are stored at Area 51. (How far is this from “the DNC server is still in Ukraine”?)

The consequences are grave. It gives Republicans license to continue to break norms and even the law (e.g., threaten election officials). It promotes irrational, obstructionist politics and increases the divide between Americans. Biden voters, I would guess, have never been more contemptuous of Trump voters as they are now, especially as the MAGA crowd spouts nonsense about a “Kraken.” (For those who are uncertain what this means, just remember “Q” is out and Kraken is in as the all-purpose bogeyman for the far right.)

Conduct from Republican House and Senate members shows the pernicious effects of this cult of absurdity. Victimology and self-pity (We were denied a second Trump term!) mixed with arrogance (Only we know what really happened in those ballot-counting rooms!) do not make people amenable to compromise or empathy. Indeed, it turns seemingly capable and sane public figures into raving lunatics, uninterested in solving real problems. When you’re chasing ghosts in the Dominion Voting Systems, there is little time for real legislation. Instead, you wind up with Sen. Ron Johnson (R-Wis.), formerly purveyor of Russian-inspired conspiracies, holding hearings on the nonexistent fraud that even President Trump does not really believe happened. The mega lawsuit supported by Republican state attorneys general is now about “overturning” the election results, as Trump has repeatedly said on Twitter.

Expect a new norm to take root in the Republican Party that any lost election is a stolen election. Wholesale attempts to restrict voting (that make voter-ID laws look mild by comparison) and actual corruption of the election process may follow. It may be that Sen. Mitt Romney (Utah) will be the last Republican to concede a presidential election. Pressuring election officials to change the results could become commonplace.

And sadly, what we learned in the Trump era is that once you are ready to believe utter nonsense in one arena because Trump says so, you’re willing to believe — in fact, compelled to believe! — utter nonsense about a lot of things. Coronavirus is overblown. Masks are not needed.

“The Great Leader is never wrong” is the most fundamental principle of closed, authoritarian societies. When communism was crumbling in Poland, people began to put up signs that read “2 + 2 = 4,” a clever reminder that in a totalitarian state, reality is the province of the state and obedience to falsehoods is a requirement for survival.

The Republican Party, ironically the party that used to defend objective reality and scorn victim-mongering, now thrives as an institution in which people, as Trump said at a recent rally, think “we’re all victims” and accept Trump’s alternative reality. Maybe one day an American Lech Walesa will arrive in the Trump heartland and revive the spirit of democracy. Until then, the GOP remains the “2 + 2 = 5” party.