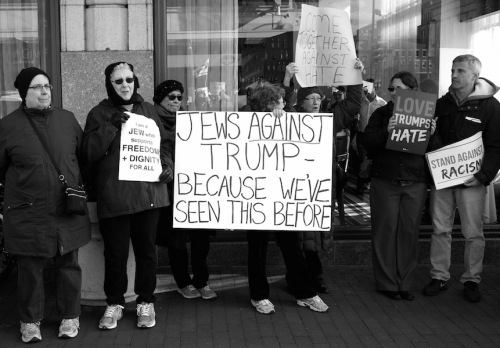 Judea Speaks– ‘Trump can and must be prosecuted’

ed note–and with this, ladies and Gentile-men, if in fact DJT is removed and replaced with Israel’s choice for POTUS–Joe ‘I’m a Zionist’ Biden–the circle will have been made complete.

Rubin, along with fellow members of the NeoCon gang such as Bill Kristol, David Frum, Eliot Cohen, Max Boot, et al, represent some of the most important pistons in Israel’s information war against the American mind immediately following 9/11 that resulted in–among many things–the destruction of Iraq and the DECAPITATION of that country’s political leadership.

And they have waged the VERY SAME WAR against DJT.

We point this out in underscoring a fact that has been discussed on this website for a long time, i.e. how the ‘9/11 Truth’ movement, the ‘anti-war’ movement’, the various  ‘Pro-Palestinian’ movements have all become, to some degree, just small cul-de-sacs within that larger neighborhood known as the ‘Deep State’. With very few exceptions, each of these groups have for the most part added their voices to those of the unesteemed NeoCon asset/spy Rubin and the rest of the gang and to some degree, as small as it may be, contributed to what all are witnessing right now with what has been an operation run out of Israel aimed at removing a certain DJT from the White House before he could get too far in executing the ‘911 U-Turn’ that has been a major part of his Foreign Policy agenda.

A very wise political revolutionary once said that ‘What ye sow, also shall ye reap’, and the various individuals and groups who–rather than bringing water to the fires lit to the Trump White House, instead brought kindling and gasoline, are about to experience in a manner very much up close and personal the inescapable end result of their foolish choice to willingly participate in the very thing which they claim to be against–advancing Israel’s long-rage goal of Apocalyptic war in the Middle East.

Wednesday’s attack on the Capitol so stunned the country that we run the risk of not fully processing the unique violation of law that it represents. Imagine not considering whether we should prosecute Islamist terrorists or the Oklahoma bombing terrorists or a mass shooting in a parking lot. The same urgency we would apply in those cases should be applied in holding everyone involved in the attack on the Capitol legally responsible. That includes not only the participants but also all others who incited it.

Not only did the mob’s attack result in deadly violence, it also sought to overthrow our democracy. It was in every sense of the word sedition, as defined in federal law:

Once we understand the gravity and uniqueness of the case, we can fully appreciate that not only the direct participants but also those who funded, organized and incited them must be dealt with. If there was a conspiracy (in laymen’s terms, an overt agreement to storm the Capitol), then all members of that conspiracy remain liable for the crimes that ensued.

President Trump, for his part, might try to pardon himself, but there is no such thing. Pardons come from the tradition of the sovereign extending clemency to others. Monarchs and their representatives (e.g., royal governors) were immune from prosecution, so the idea of self-pardon was nonsensical. When the Founders adopted the pardon power (“The President … shall have power to grant reprieves and pardons for offenses against the United States, except in cases of impeachment”), they used the language as known at the time. “Pardon” was then, and remains, a transitive verb — not a reflexive one. Frank O. Bowman III writes for Just Security:

The Oxford English Dictionary explains that the English word “pardon” as both a noun and a verb is a borrowing from the French language and derives from two Latin roots: per, meaning “by,” and donum, a gift, or dōnāre, meaning to make a donation or gift. Thus, a pardon is a type of gift, and to pardon is to give such a gift. The act of gift-giving requires both a giver and a recipient. Although we sometimes loosely speak of giving ourselves a gift, in the sense of permitting ourselves an indulgence of some sort, the ordinary sense of the word gift, and thus of the act of pardon, requires two parties.
Had “self-pardon” been intended, the Founders would have provided the presidency with a “get out of jail for life” card, a preposterous notion that contradicts the fundamental decision to abandon a monarchy in favor of a president with limited powers.

Given that Trump cannot pardon himself, he has two choices: Resign and hope that Vice President Pence, whom he has been vilifying all week, pardons him, or potentially face the music at 12:01 p.m. on Jan. 20.

The possible offenses — conspiracy to commit sedition, incitement to riot (resulting in death) — are so grave and unique as to obviate any concern about a “political” prosecution. We should not prosecute him for any action prior to the election, although facts relevant to prosecution (e.g., a pattern of inciting violence, messaging to his violent supporters) would be highly relevant.

Remember, Trump would have a variety of defenses. He might claim he had no idea the group would act violently, although his delay in calling them to go home suggests he countenanced the carnage for some time. The First Amendment does not allow one to be prosecuted for ideas, but the proximity to the Capitol, the direction to march there and his statement that “If you don’t fight like hell, you’re not going to have a country anymore,” all work against him.

While not speaking to criminal offenses, former attorney general William P. Barr aptly explained, “Orchestrating a mob to pressure Congress is inexcusable.” The word “orchestrating” is a perfect description not only of the immediate incitement but also of a potential conspiracy. Recall that Trump had been calling for his followers to come to Washington. On Dec. 19, he tweeted, “Statistically impossible to have lost the 2020 Election. Big protest in DC on January 6th. Be there, will be wild!”

As an aside, remember that in the case of a conspiracy, one is responsible for all the actions that flow from that conspiracy. As a Congressional Research Service report explains, “The liability of individual conspirators continues on from the time they joined the plot until it ends or until they withdraw. The want of an individual’s continued active participation is no defense as long as the underlying conspiracy lives and he has not withdrawn.” Since pipe bombs were found, for example, all conspirators might face an explosives charge.

No president has done anything remotely like what Trump did, so his prosecution would not run the risk of criminalizing ordinary political activity or even highly unacceptable behavior (such as obstruction of justice, as the Mueller investigation had found). As we come to grasp the enormity of Wednesday’s political and criminal offense, the notion of letting Trump “walk” can rightfully be seen as preposterous.