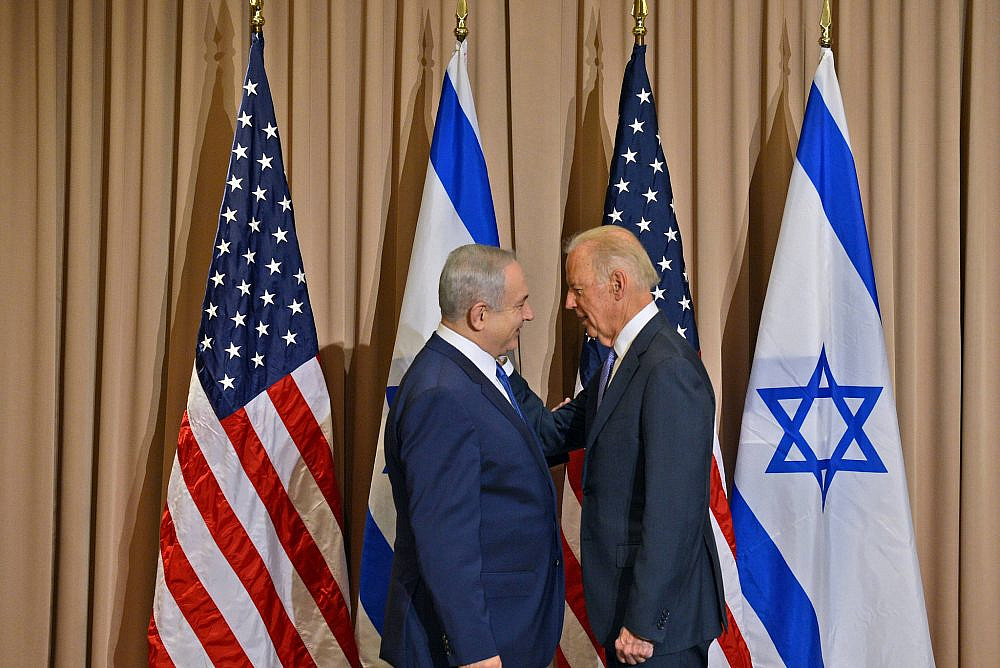 “We will maintain our ironclad commitment to Israel’s security, while seeking to further its integration with its neighbors and resuming our role as promoter of a viable two-state solution.”

ed note–it is important as you read this to keep in mind the fact that Biden owes his ‘presidency’ to Netanyahu and to Judea, Inc’s tentacled network of NeoCons operating within the American Deep State and therefore everything he does down to the minutest of political minutiae is done with the prior understanding that this is what he is supposed to do in furthering Israel’s agenda.

Having said that, Biden’s ‘bold’ statement concerning ‘allies’ in the Middle East not getting a ‘blank check’ in terms of bucking America’s interests are just part and parcel of the ‘jrama’ scripted for him viz his role as POTUS in AFFECTING the appearance of a resolute American President who isn’t ‘owned by d’Jooz’, when in fact this is very much the fact, per the ‘protocols’ as agreed-upon with the OFAG (organized forces of anti-Gentilism) that arranged his ‘election’.

Now, the strategic reasons for doing this are obvious–Biden’s predecessor, DJT, as part of his ‘art of the deal’, engaged in the necessary evil of affecting the image of an over-the-top Semito-phile POTUS who did everything possible in schmoozing the followers of Judaism as part of the ‘tit-for-tat’ process of negotiating his ‘deal of the century’ aimed at preventing WWIII. Had he remained at 1600, at this very moment, doubtless that the finishing touches would be put to not only the creation of the very first ‘Palestinian state’, but as well, Iran would be coming to terms that–once implemented–would have taken away Netanyahu’s grand plans for Armageddon.

Biden was put into office by the OFAG for many reasons directly related to the OFAG agenda, but the biggest and most important is that 3-letter, mono-syllabic word whose absence during the 4 years of DJT represented a clear and present danger to Judea’s plans for creating that Nile-to-the-Euphrates Judaic Empire as detailed within the pages of the Torah, and that word is simply

Therefore, Biden pretending to be his ‘own man’ in terms of an ‘independent’ US Foreign Policy in the Middle East is nothing more than maskarovka on the part of the Hebrish handlers writing his script for him and done as the necessary pre-enticement maneuver in schmoozing various parties–most importantly Iran–to ‘come to the table’ with Biden and to sign onto that ‘pound of Iranian flesh’ contract which Shylock has written up that–once it comes due, results in the same 3 letter, mono-syllabic word referenced above and which the Jewish state must have if her apocalyptic plans are to be realized.

The Biden administration issued a warning to its allies in the Middle East not to oppose US policies and not to seek military solutions to the region’s problems.

“We do not believe that military force is the answer to the region’s challenges, and we will not give our partners in the Middle East a blank check to pursue policies at odds with American interests and values,” it said in a document the US Embassy in Jerusalem sent to the media on Friday.

The document entitled “Interim National Security Guidelines” was posted on the White House website last week and outlined the Biden administration’s global strategic interests, including in the Middle East. It gave a nod in the direction of the Israeli-Palestinian conflict, but it did not mention the Palestinians or its conflict with Israel on settlement building.

The document stated that “in the Middle East, we will maintain our ironclad commitment to Israel’s security, while seeking to further its integration with its neighbors and resuming our role as promoter of a viable two-state solution.”

It did, however, make more references to the need to halt Iran’s nuclear program.

“We will work with our regional partners to deter Iranian aggression and threats to sovereignty and territorial integrity, disrupt al-Qaeda and related terrorist networks and prevent an ISIS resurgence,” the Biden administration stated in the document.

The US policy outline was published as Israel has increasingly spoken of the possibility that it might have to use force to prevent Iran from obtaining nuclear weapons.

Israel and the Biden administration are at odds on how best to prevent Iran from becoming a nuclear power and to halt its regional and global support of terror activities.

While the two allies agree on the end goal, the Biden administration believes the best way forward is to rejoin the 2015 Iran deal, known as the Joint Comprehensive Plan of Action, designed to curb Iran’s nuclear ambitions.

Israel believes the deal only emboldens Iran and that it retains the ability to become a nuclear power. It has laid out a series of demands it would like to see addressed in a future deal, including Tehran’s ballistic missile program.