LOL!!! ‘Israel may not be part of strategy if US returns to nuclear deal’

ed note–no, ladies and Gentile-men, this is not a hoax, a spoof or a joke. There really was/is news piece coming out of Al Jazeera–an outlet which postures itself as something of an ‘authority’ in discussing Middle East issues–which has just posited the notion that the US under a Biden administration would buck Netanyahu and Judea in forming its own plans for something as important as Iran.

Again, the reasons for calling BS on this ridiculous piece of ‘news commentary/analysis’ are several, to wit–

Firsto, what must be understood is that Netanyahu is not as opposed to the ‘JCPOA’ as he has intimated, and for the simple reason that written deeply into the ‘protocols’ of that document one will find in Kristol clear language the same kind of ‘legal’ measures that were used in justifying the destruction of Iraq per Israel’s demands–Iran trying to attain WMDs and evading ‘international inspectors’, just as Saddam Hussein was accused of doing right before his nation was bombed into oblivion.

Nexto, anyone who believes for a MICRO-MILLISECOND that this guy– 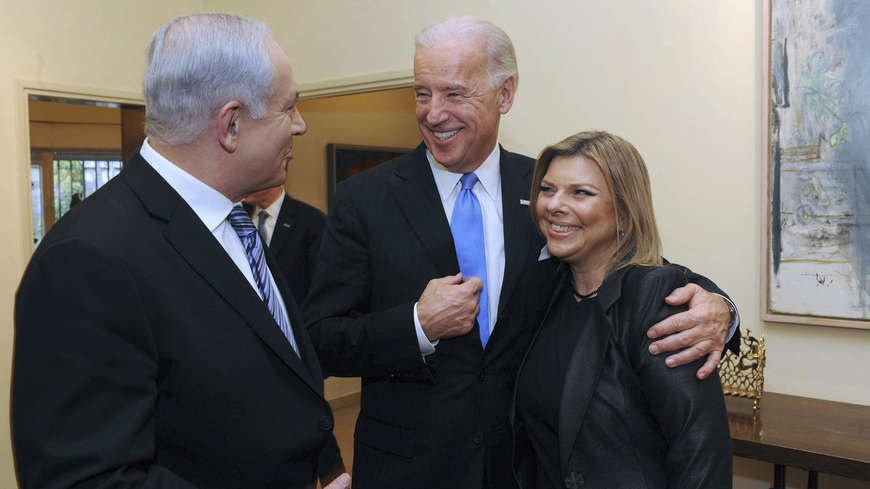 Would ‘go it alone’ and would ‘buck’ Israel and Netanyahu when it comes to ANY foreign policy venture where the Middle East is involved is simply delusional in numbers that are triple-digit in their percentage, and for the simple reason that Netanyahu is the one who ran DJT out of 1600 and who pushed Biden in.

Again, this is all posturing or, as some ‘experts’ like to say, ‘political theatre’ in creating the false image that Biden is his ‘own man’ when it comes to Israel and therefore that the Arabs/Persians will be able to ‘work’ with him better than they did with DJT.

And in the meantime, while the Arabs/Persians are thinking that there is ‘room for negotiations’ with the Biden Administration, Netanyahu will be lining up his ‘next shot’ that will feature some major act of terrorism with massive loss of American life that will put things ‘back on course’ with regards to the ‘great reset’ which Israel got started with her Mossad-engineered terrorist attacks against the US on 9/11/2001.

Israel’s ambassador to the United States has suggested his country would not engage with President Joe Biden on strategy towards Iran’s nuclear programme if the US returns to the 2015 nuclear deal.

Biden has made returning to the deal, which saw Tehran curtail its nuclear programme in exchange for sanctions relief, a priority, saying it is a key first step in reaching new agreements to strengthen and lengthen restrictions on Iran’s nuclear ambitions.

Israeli Prime Minister Benjamin Netanyahu has opposed a return to the deal that former president Donald Trump withdrew from in 2018 and instead imposed a “maximum pressure” campaign of sanctions against Iran.

While Israel was not a party to the 2015 agreement, Ambassador Gilad Erdan told Israel’s Army Radio on Tuesday the government may not engage with the US on strategy related to Iran’s nuclear programme if the Biden administration returns to the deal.

“We will not be able to be part of such a process if the new administration returns to that deal,” Erdan said.

The statement comes as Israel has increasingly suggested taking military action against Tehran for its nuclear programme. The killing of an Iranian nuclear scientist in November of 2020, which Tehran has blamed on Israel, has further heightened tensions.

“It would appear that only crippling sanctions – keeping the current sanctions and even adding new sanctions – combined with a credible military threat that Iran fears – might bring Iran to real negotiations with Western countries that might ultimately produce a deal truly capable of preventing it breaking ahead [to nuclear arms],” Erdan said.

Biden has said the US will return to the 2015 nuclear deal only if Iran first returns to its obligations under the agreement, whose parties also include China, the European Union, France, Germany, Russia and the United Kingdom.

Tehran, which has begun stockpiling and enriching uranium beyond the limits outlined in the agreement, has said Washington must make the first move in lifting sanctions.

Iranian officials also warned that looming deadlines – including legislation that goes into effect on February 21 that requires Tehran to harden its nuclear stance if sanctions are not lifted – and elections in June may mean the window for returning to the agreement is closing.

‘All leverage will be lost’

During Tuesday’s interview, Erdan said if the US returns to the deal, “all its leverage will be lost”.

“Essentially, the moment it removes the sanctions the Iranians will have no real incentive to negotiate and reach a deal that is truly capable of ruling out nuclear capabilities,” said Erdan.

Meanwhile, Netanyahu, who is up for re-election next month, finds himself at a difficult juncture.

He has revived tough rhetoric against Iran but has not yet had direct communication with Biden, fuelling speculation that the new administration is seeking to signal a tougher line towards Israel than during Trump’s presidency.