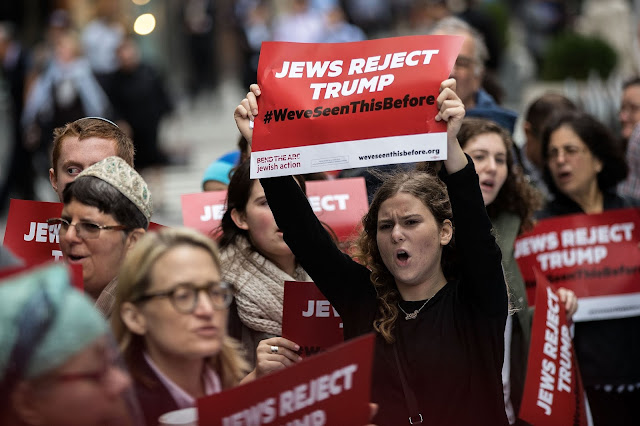 Aaron Keyak, NY Daily News
Let us be clear on this–When it comes to anti-Semitism in America, Trump is much more part of the problem than part of the solution.
We saw it just this past week when his appearance at a Jewish conference led to the inevitable series of anti-Semitic tropes, all spouted from the mouth of the president of the United States. This time, he addressed a Jewish audience at the annual summit of the Israeli American Council in Florida.
“A lot of you are in the real estate business,” President Trump told the crowd. “I know you very well, you’re brutal killers, not nice people at all.”

He went on to insinuate that Jews would vote to reelect him to protect themselves from higher taxes and then faulted some American Jews for not “loving Israel enough.”
It was a nauseating but familiar spectacle.
The president has not lacked for anti-Semitic statements. Back in September, he warned American Jews not to be “disloyal” to the state of Israel by opposing his administration. He described Israel’s premier, Bibi Netanyahu, as “your prime minister” to another Jewish audience. Before the Republican Jewish Coalition, when he was still a candidate, he exclaimed: “You’re not going to support me because I don’t want your money. Isn’t it crazy?”
Jews and money has been something of an obsession for the president. He is reported to have said during his decades as a businessman that “the only kind of people I want counting my money are short guys in yarmulkes.”
There is a theme that runs through all these comments. American Jews are ‘an other’ that somehow lives apart from the rest of American society and has a set of particular interests that might even conflict with those of the rest of the country. This idea of Jews as a nation-within-a-nation, a minority that pursues aims contrary to those of their fellow citizens is an age-old anti-Semitic motif. This was the reason offered by the anti-Semites of the 19th century for not granting civil rights to the Jews of Europe. This conception of Jews as a bloc that has uniform interests has been at the base of the deadliest pogroms and the darkest chapters of our history as a people and, of course, the Holocaust.
Jewish Republicans have been slow to denounce the president’s rhetoric, if they do so at all, presenting him as a stalwart backer of the state of Israel. No doubt his administration’s hasty move of the United States embassy in Israel to Jerusalem and the State Department’s declaration that West Bank settlements are not illegal has greatly pleased the small minority that makes up the most conservative segments of the American Jewish community. This all despite his reckless decision to abandon Syria, leaving Israel in the lurch and prey to the imperial ambitions of Iran and Russia.
But being hawkishly in line with the current government of Israel is not a blank check to use anti-Semitic rhetoric.
In fact, one can be considered “pro-Israel,” at least by some, and still accept anti-Semitism: The proof exists today in Eastern Europe, where Hungarian Prime Minister Viktor Orban kindles warm relations with Jerusalem, even as he flirts with Holocaust denial and demonizes George Soros as a latter-day Elder of Zion. Trump’s supporters must recognize the perils of this president’s words. The use of anti-Semitic tropes must be condemned in all its forms, even if one agrees with the individual’s policy toward Israel.
Concerns from Jewish Americans also stretch far past the question of the Middle East to encompass all aspects of life in the United States, including the climate of fear and bigotry that this president has bred. The position of Jews in America once seemed so secure, and while our community has been spared the level of suffering of our brethren in Europe, that sense of safety and comfort in the United States has been shattered, the recent attack in Jersey City only being the latest deadly example.
This president is no friend to the American Jewish community, no matter his attention to the right-wing in Israel, to which he panders more for the benefit of his Christian fundamentalist base than for the pro-Israel cause. At a time of rising anti-Semitism in the United States and Europe, as our houses of worship and community centers become the targets of domestic terrorists, the president’s utterances are not only wrong and misguided,  his comments continue to have a fatal potential.
The path of destruction runs through Charlottesville and Pittsburgh, and, if history is any guide, the bloody road will unfortunately not stop there. At a certain point, the president’s most ardent supporters must listen carefully to his rhetoric and take them both literally and seriously. This pattern can found throughout Donald Trump’s public life and must not be dismissed as jokes or as harmless.
And no executive order he signs will change that.
American Jews are not alone. The current occupant of the White House has insulted and stoked hatred against Muslims, African Americans, Latinos, women, those with disabilities and many, many more.
He must hear from all of us come this fall.