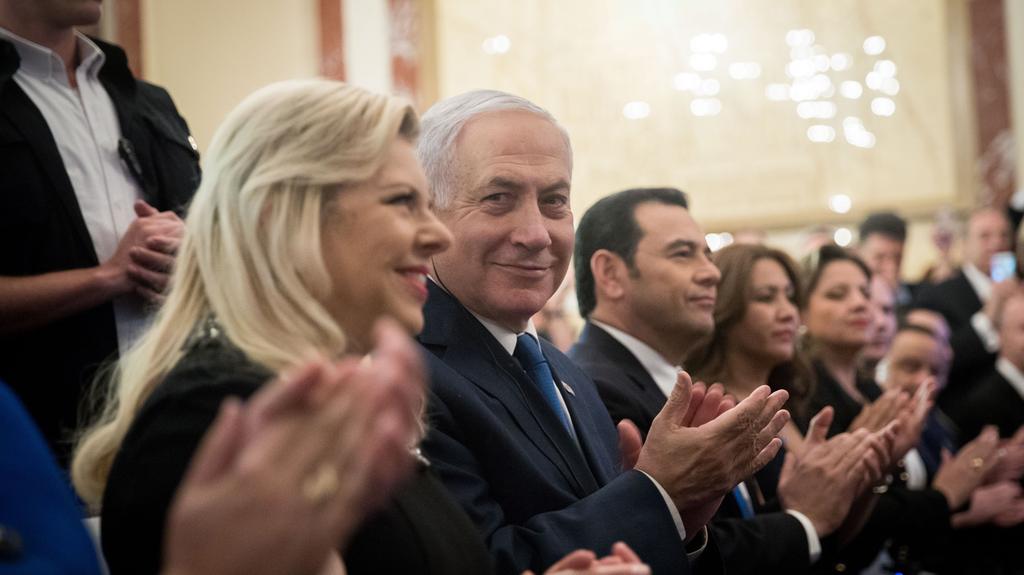 ed note–again, just as it was years ago when Netanyahu handed then-VP Biden a picture with the glass broken and said ‘I have nothing to offer you but broken glass’, it is the nuanced political gangsterese being spoken at the 2nd, 3rd, 4th etc dimensional level that must be understood if any meaning is to come out of it.

Firstly, the position that Netanyahu is only doing so because keeping Trump’s pic is ‘politically-problematic’ for him, and therefore for reasons related to ‘political expediency’ Trump is being removed does not hold water.

Netanyahu is the longest-serving PM in Israel’s history and he didn’t attain that by riding into Tel Aviv on a tank and threatening to blow up each and every house there if the people didn’t vote for him. He’s there in that position because the people want him there, plain and simple. All the protests taking place and specially in the IMMEDIATE AFTERMATH of Trump beginning his ‘big push’ for a peace deal are largely ‘political theatre’ related to creating a politically-impossible environment for such a deal to be signed, sealed and delivered, since if there isn’t a functioning government, no ‘deals’ can be made.

All can rest assured that if in fact Biden attains the White House we will see a ‘return to normalcy’ and a stabilization of Israel’s internal politics since there is no way in hades that Biden is going to squeeze Netanyahu into a peace deal he doesn’t want.

No, Nutty Netty removing Trump from his page is the equivalent of the Judaic curse that falls upon those who are deemed ‘Enemies of Zion’, and especially on Yom Kippur, where the righteous have their names inscribed into the ‘Book of Life’ and those who are ‘unrighteous’ have their names ‘blotted out for all eternity’.

Also, please take careful note of the fact that of all the images Netanyahu chose to use in replacing the picture of DJT it was none other than–

A Menorah, Israel’s national symbol commemorating the first attempt on the part of the Jewish state (through the person/agency of the Maccabbees, Judaic religious terrorists who first attempted the process of expanding the borders of Israel to the ‘Nile to Euphrates’ nonsense as it appears in the Torah.

Keep in mind as well that Netanyahu receiving the Covid shot with that smug smirk on his face and saying ‘Citizens of Israel, we are returning to life’ is his way of laughing at DJT and rubbing in his face all the trouble and turmoil that Israel caused the US President as a result of the virus that in all likelihood was cooked up in an Israeli bio-weapons lab in Nes Ziyyona.

Israeli Prime Benjamin Netanyahu dropped US President Donald Trump from the banner photo of his Twitter account on Tuesday in an apparent break with a political ally facing possible impeachment.

A photo of Netanyahu sitting next to Trump at a White House meeting had long taken pride of place on the official @netanyahu account, testimony to the conservative Israeli leader’s close ties with the Republican president and his popularity in Israel.

Early on Tuesday, another photo, showing Netanyahu being injected with the coronavirus vaccine, topped the page, along with the slogan for Israel’s inoculation campaign: “Citizens of Israel, we are returning to life.”

Netanyahu had kept the photo of his meeting with Trump, long in lockstep with him over a tough policy towards Iran and the Palestinians, on the site even after the Republican president’s defeat by Democrat Joe Biden in the US election in November.

The photo was briefly replaced with a Hanukkah holiday-themed image last month, raising media speculation that Netanyahu had decided to distance himself from Trump.

But when the eight-day Jewish festival was over, Trump reappeared – although no longer alone with Netanyahu in a photo.

Instead, Netanyahu posted a banner image of himself with the president and the foreign ministers of the United Arab Emirates and Bahrain signing an agreement at the White House in September on formalizing ties with Israel.

No explanation was given on Netanyahu’s site for Trump’s disappearance, a day before the US House of Representatives was expected to begin considering his second impeachment after last week’s storming of the Capitol.

Trump’s own account was permanently suspended by Twitter on Friday due to what the social media giant described as the risk of further incitement to violence.

In televised remarks on Thursday, Netanyahu called the events at the Capitol a “rampage” and said he was certain American democracy would prevail.