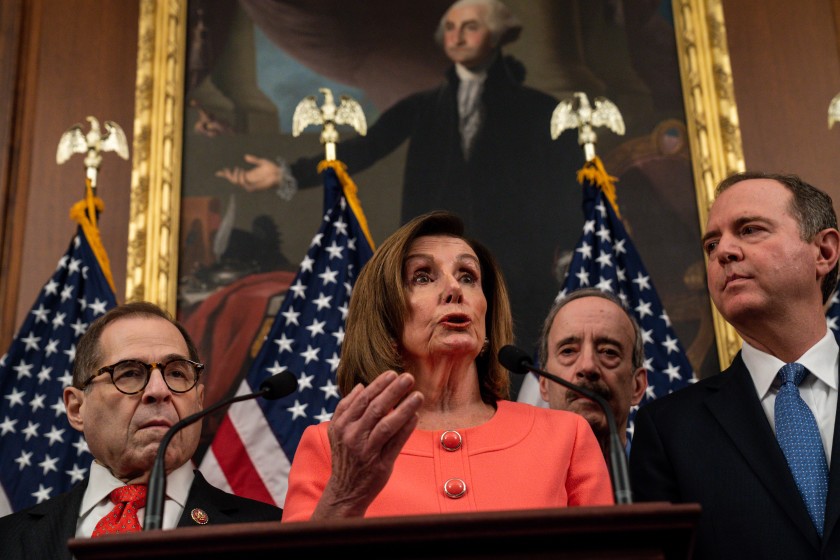 ed note–As it is with many things these days where the complicated and oftentimes convoluted nature of geo-politics is concerned, and ESPECIALLY those geo-politics where a certain theocratic nutcase ‘state’ such as Israel is involved, it is what is NOT said relative to the event taking place that is of more importance than what IS said.

That being the case, let’s start off this little discussion with a careful study of the pic above. It features Speaker of the House Pelosi, and standing behind her are three of her handlers–Nadler, Schiff, and Engel–all of the Hebrish persuasion and all playing INTRINSIC roles in the Impeachment fiasco against POTUS DJT exactly one year ago.

Now, the fact that the three are indeed of the Hebrish persuasion carries with it certain ‘concerns’ over possible ‘conflict of interest’ issues, given that as members of ‘la famiglia’, they hold AUTOMATIC citizenship in the Jewish state and thus, the possibility (i.e. CERTAINTY) exists of them being pulled in directions more favorable to the interests of that same Jewish state (that in their heart-of-hearts represents ‘Home, Sweet Home’) over the interests of the nation which they ostensibly make the pretenses of serving as elected members of Congress.

Now, having said THAT, a few important questions need to be asked, and especially viz the political upheaval taking place in the last 12 months as related to the person and presidency of one DJT.

Despite the fact that a search of news stories featuring Pelosi speaking on the phone with Netanyahu over the last 12-month time frame (where 2 Pelosi-directed impeachments against DJT took place ) reveals nothing, nevertheless all can rest assured that during that time–as well as the previous years going all the way back to DJT securing the Republican nomination in 2016–that Pelosi and Netanyahu were in CONSTANT COMMUNICATION with each other, and by that we mean on a daily basis.

Now, whether this ‘communication’ took place over the phone in the same manner as detailed in the news story below or whether it was done via ‘designated courier’–meaning one or all of the Hebrish creatures featured in the pic above, i.e. Nadler, Schiff, Engel, etc–is immaterial next to the fact that Pelosi received her marching orders and received them in Kristol clear terms viz what was expected of her by Netanyahu and particularly as it related to the person and presidency of DJT.

What this means is that all the political turmoil which Pelosi oversaw against DJT that resulted in–among many things–2 impeachments would NEVER have been permitted to move forward as much as a micro-millimeter if IN ANY WAY it were viewed as ‘unagreeable’ to the mood and temperament of Netanyahu.

We are forced to point out these very basic and rudimentary facts due to what has been a 5-year-long tsunami of absolutely stupid and senseless ‘analysis’ on the part of an entire chorus of circus clowns billing themselves as geo-pol ‘experts’ who have claimed (and based upon the most flimsy and barely-circumstantial evidence) that there was no ‘plot’ on the part of OFAG–the organized forces of anti-Gentilism–to cause DJT any political harm, when in fact, the ugly truth of the matter is that if there were no ‘plot’ on the part of OFAG to cause DJT any political harm, none of the turmoil to which the world has been witness for the last 5 years, and ESPECIALLY in the last 12 months–would have taken place at all.

Now, as to the ‘why’ of the plot on the part of the OFAG to cause DJT as much political harm as possible, what it all boils down to is a simple, 3 letter, mono-syllabic word whose absence during the 4 years of DJT’s administration has represented a clear and present danger to Judea’s plans in the Middle East in bringing about the very same ‘Greater Israel’ that was/is the very reason for resurrecting this political corpse from its 2,000 year old grave, and that word is simply

…Which all can rest assured Biden will deliver and which would not have been possible were it not for Pelosi doing EXACTLY as she was ordered to do, and particularly in the span of the last 2 years, orders that were handed down to her from none other than Netanyahu himself.

US House Speaker Nancy Pelosi on Wednesday spoke to Prime Minister Binyamin Netanyahu “to reaffirm the unbreakable bond between our nations & Congress’s unwavering support for a safe & secure Israel,” she wrote on Twitter.

Pelosi’s conversation with Netanyahu comes a week after US President Joe Biden phoned the Prime Minister for the first time since taking office.

The White House said following the conversation that Biden “affirmed his personal history of steadfast commitment to Israel’s security and conveyed his intent to strengthen all aspects of the US-Israel partnership, including our strong defense cooperation.”

“Together, the leaders discussed the importance of continued close consultation on regional security issues, including Iran,” added the statement.

“The President emphasized US support for the recent normalization of relations between Israel and countries in the Arab and Muslim world. He underscored the importance of working to advance peace throughout the region, including between Israelis and Palestinians.”

Earlier this week, US Secretary of State Antony Blinken spoke to Foreign Minister Gabi Ashkenazi and told him the US believes in a two-state solution to solve the Israel-Palestinian Arab conflict.

“The Biden Administration’s believes the two-state solution is the best way to ensure Israel’s future as a Jewish and democratic state, living in peace alongside a viable and democratic Palestinian state,” Blinken told Ashkenazi during the call, according to the State Department.