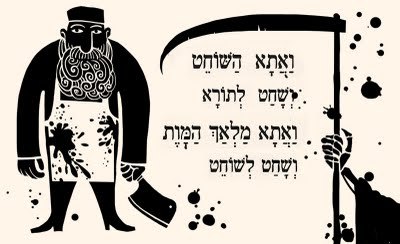 ed note–as we like to say here often, a broken clock is right twice a day, but even having said that, there are some very important nuances contained herein that need to be carefully read, studied, analyzed and remembered for the implications they contain, and particularly the very last line of the OpEd.

First, our Hebraic writer is 100,000% correct– Hanukkuh (or as the late, great, and greatly-missed Mike Piper used to refer to it, ‘H’Nooka’) is not about latkes, lights, laughter, dreidels, etc. Much in the same manner as the Judaic war on the Ishmaelites is perfumed with language such as ‘the war to defend freedom’, the war against unborn children is gussied up with noble-sounding precepts such as ‘a woman’s right to choose’, how pornography is elevated as ‘protected free speech’ and male on male/female on female sexual activity is celebrated as an ‘alternative’ lifestyle, likewise, the wordsmiths, witches and warlocks working for organized Jewish interests, whose job is to cast spells over the minds of Gentiledom concerning the inherently anti-Gentile energies that drive the celebration of H’Nooka (and virtually all other Judaic religious celebrations) make sure that the ugly truth concerning this particular remembrance is discussed only in very hushed tones and only amongst those who are ‘true believers’ as to what it really encompasses.

And, as our Hebraic author makes very clear, Hanukkuh is about the VIOLENT Judaic rejection of Western culture as typified by the Greeks and then the Romans, whose legacy today is (or rather was) modern Western Civilization.

Equally important in all of this are the very last lines of the OpEd exposing the manner by which even those ‘Hellenized’ Jews of today just can’t seem to (completely) break free of their addiction to Judaism, and especially when/if the alternative is Christianity, to wit–

‘Given all of this, there’s a part of me that wants to skip out on Hanukkah altogether. Why should I light candles and sing songs to celebrate a group of violent fundamentalists? The answer, frankly, is that it’s not my choice. With my daughter ready to sign up for Team Santa, we have to celebrate something, and I’m not quite Hellenized enough to get a Christmas tree, because at the end of the day, it’s all about beating Santa’.

A few months ago, I was sitting on the couch with my 3-year-old daughter, watching YouTube videos about animals in space, when out of nowhere she looked up at me and asked:

“Dada, can we celebrate Christmas?”

“We don’t celebrate Christmas,” I told her, putting on my serious voice. “We celebrate Hanukkah.”

Like generations of Jewish parents before me, I did my best to sell her on the relative merits of Hanukkah. True, Christmas might have those sparkly trees, ornaments and fruitcake. But we have latkes, jelly doughnuts and eight nights of presents.

“Do we have Santa?” she asked, hopefully.

I tried to reiterate the part about the jelly doughnuts and the eight nights of presents. But she wasn’t having any of it. I can’t say I blame her. During the rest of the year, the Jewish holidays we celebrate are like special, bonus celebrations we get to have on top of everything else going on in the calendar.

With Hanukkah and Christmas, however, it’s a zero-sum game.

Most of the year, it isn’t hard for our family to feel both American and Jewish. But in December — when there are wreaths and Peppa Pig Christmas specials and inflatable Santas everywhere you look — that dual identity becomes more of a question. Which is why Hanukkah is a big deal for mostly assimilated Jews like myself.

The only trouble is the actual holiday itself and what it represents. Not the latkes and the dreidels, but the story of Hanukkah, which at its heart is an eight-night-long celebration of religious fundamentalism and violence.

For most of the past 2000 years, Hanukkah was an afterthought on the Jewish calendar, a wintertime festival of lights during which people spun tops and ate greasy food to commemorate what has to be one of God’s least impressive miracles — a small container of oil that (we are told) lasted for eight nights. More recently, as Jews have become assimilated into American society, the holiday has evolved into a kind of Semitic sidekick for Christmas, a minor festival pumped up into something it was never meant to be so that Jewish kids won’t feel bad about not having a tree.

This is the version of Hanukkah that I grew up with: presents and chocolate gelt; latkes with sour cream and applesauce; a few somber, off-key songs that no one fully remembered about Judah Maccabee.

This is the version of Hanukkah I had in mind when my daughter and I walked down to our local branch of the Oakland Public Library to check out a stack of books about the holiday.

Most of the books we found presented a familiar narrative — dreidels and menorahs and pious Maccabees doing battle against their enemies — but between the lines, there were some hints at a darker story, enough to send me to Wikipedia and the Books of Maccabees on the (definitely not Jewish but very helpful) Bible Gateway website, which led me back to the library for another stack of books, this one for myself.

According to most modern scholars — and a few rabbis I called on to help me out — the story of Hanukkah is based on the historical conflict between the Maccabees and Hellenized Jews, the former being religious zealots who lived in the hills of Judea and practiced an ancient form of guerrilla warfare, the latter being mostly city-dwelling assimilationists who ate pork, didn’t circumcise their male children and made the occasional sacrificial offering to pagan gods.

Some of the details are up for debate, depending on which texts you consult, but everyone agrees that the Maccabees won out in the end and imposed their version of Judaism on the formerly Hellenized Jews. So Hanukkah, in essence, commemorates the triumph of fundamentalism over cosmopolitanism. Our assimilationist answer to Christmas is really a holiday about violently subjugating assimilated Jews.

The more I thought about all this, the more it disturbed me. For what am I if not a Hellenized Jew? (O.K., an Americanized Jew, but what’s the difference, really?) I eat pork every so often. Before having children, my wife and I agonized over the question of circumcision. And while I’ve never offered burned sacrifices to Zeus, I do go to yoga occasionally. When it comes down to it, it’s pretty clear that the Maccabees would have hated me. They would have hated me because I’m assimilated and because I’m the product of intermarriage. And while I can’t say for certain what the Maccabees would have thought about my fondness for Bernie Sanders or my practice of Reconstructionist Judaism, I’m pretty sure they wouldn’t have liked those things either.

Given all this, there’s a part of me that wants to skip out on Hanukkah altogether. Why should I light candles and sing songs to celebrate a group of violent fundamentalists?

The answer, frankly, is that it’s not my choice. With my daughter ready to sign up for Team Santa, we have to celebrate something, and I’m not quite Hellenized enough to get a Christmas tree.

So this year, for lack of a better alternative, I’m going to try to embrace Hanukkah in all its contradictions. When I light the candles, I’m going to celebrate the possibility of light in dark times, the importance of even the smallest miracles. And when everyone else is singing about the Maccabees, I’ll be saying a prayer for the Hellenized Jews and for the “renegade Jews” of our day.

Then I’m going to sneak my daughter an extra piece of chocolate gelt and break out the presents. Because at the end of the day, it’s all about beating Santa.

5 thoughts on “The Hypocrisy of Hanukkah”