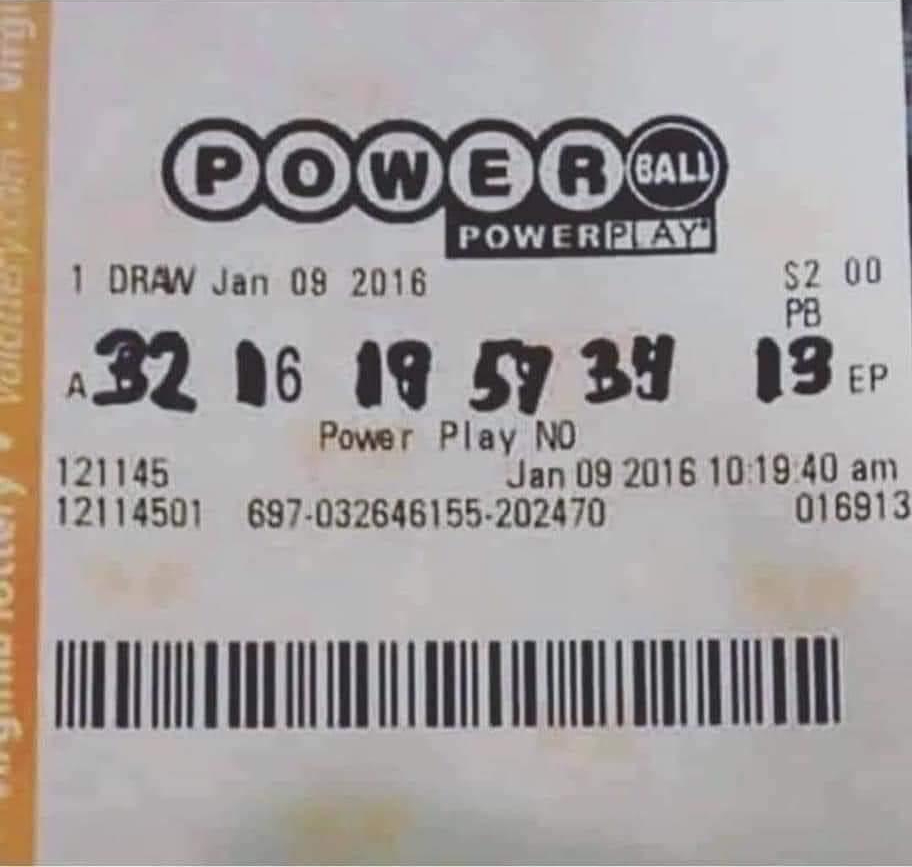 ed note–please take a good look at the pic above.

It’s a lottery ticket with (obviously) the original numbers removed/replaced with the winning numbers for that night. Done as a joke, part of the humor is the fact that the person doing it did so in a manner to make it clear that it was a forgery and a fake by not trying to make the ‘winning’ numbers look in any way ‘authentic’ or ‘official’.

Now imagine someone actually trying to cash this thing in, a crook so dumb, so unaware of how the system works that he thinks by simply altering the ticket with a black tip marker that he will be able to fool all the computer programs, as well as the naked eye of those employees working for said lottery commission in whatever state, and that in short time–VOILA–he gets a big fat check for hundreds of millions of dollars and a never-ending ticket to paradise.

Now, let’s take it a step further. Imagine our crook, emboldened by his success, does it again–buys another $1 ticket, waits for the winning lottery numbers for that ticket to be announced, writes in those winning numbers on his ticket, cashes it in, and–VOILA–gets another big fat check.

And he does it over, and over, and over again, until he is absolutely filthy rich and–given his already existing magnetic pull towards dishonesty and illegal behavior–puts that wealth to work in criminal ways to the detriment of the civilized society around him.

And thus we have this thing known as Jewish power and its crime family headquarters, the Jewish state. The entire thing is built upon a written account of something that never took place, a tall tale that was simply etched into some kind of parchment like a fraudulent lottery ticket and is cashed in over, and over, and over again, and anyone who doubts this is the case should consider the fact that–besides all the wars and weaponry–the Jewish state rakes in as much as $30 MILLION PER DAY by the American taxpayers who–like those employees at the lottery commission too stupid and too gullible to recognize that the ‘winning’ ticket which our small-time fraudster keeps cashing in is a fake–buy into all this ‘chosen’ business which the Hebrews, Israelites, Judahites, Jews, whatever combination of vowels and consonants one prefers to use in describing them, created out of thin air in order to create the kind of world that they envision for themselves.

Now, it would be bad enough if these fraudsters plying their collective Gypsyism had ambitions no higher than picking pockets and lining their own with ill-gotten gains, but this is not the case at all. Added to their religiously-driven magnetic pull towards stealing from those of the Gentile persuasion is the accompanying Apocalyptic mindset, also etched into some parchment like fraudulent lottery numbers, promising the ‘big score’ that is to come, ushered in by their ‘Moshiac’ or ‘Messiah’ and which must be accompanied by massive amounts of war, disease, death, economic despoilation, etc.

At the end of it however, the most horrible aspect of it all is that just as in the case involving our small-time fraudster and his ‘winning lottery ticket’ scam, none of this would succeed were it not for the willing, paralyzing and pathological stupidity of the victims who go along with this fraud by buying into those ‘numbers’ on the parchment and not questioning for a moment whether or not there is any truth to it all.

Christians of various stripes worldwide represent the nuts, bolts, gears, pulleys, springs, screws, etc of this piece of machinery known as Jewish power, and at the end of the day, whatever horrible destiny awaits the world as a result of this Apocalyptic ‘lottery ticket’ which the children of Israel have scribbled for themselves, it is the gullible Christians who bought into this and facilitated its agenda who deserve the lion’s share of the indictment and conviction for the crimes that have taken place and which are to come.

Now, as far as the mad scribblings on the part of our deranged Hebrew writer, please nota bene the following–

For the last 2,000 years, the Jews have been suffering under Edom, or Rome. The Midrash says G-d will not remain passive in face of the sins of Edom, who have spread hate against the Jews ever since the time of Esau. The Jews might not be prepared or even reject redemption, but G-d will respond to Jewish suffering nonetheless…

What the reader needs to understand is that what our deranged Hebrew scribe is discussing here are Judea’s plans for revenge against ‘Rome’ which is today represented by all the nations of Europe and Europe’s offshoots in America, Canada, Australia, New Zealand, South America, etc.

At present, there is no Judaic celebration for the destruction of the same ‘Rome’ whom the ‘children of Israel’ blame for their exile and for the 2,000 years of ‘anti-Shemitism’ that has accompanied it.

However, for the last 2,000 years, Jewry has set aside the yearly commemoration of ‘Tisha b’Av,’ the 9th day of the 11th month of the Hebrew calendar (boy, what a coincidence) and considered the saddest day in the yearly calendar where they mourn the loss of their country and the destruction of their temple by the Romans.

At present, beginning with ‘9/11’, the ‘war on terror’ and its ‘clash of civilizations’ between the Christian West and the Islamic Middle East and followed by ‘Corona’, Judea, Inc is in the process of bringing about various ‘plagues’ upon ‘Rome’ as part of the plan of creating a new religious feast celebrating Rome’s destruction by the ‘children of Israel’, and which more than likely will be named ‘Tisha b’Av’, will be celebrated every year on the 9th day of the 11th month and will include in it all the lore, fantasy and black magic found in the celebrations of Passover, Purim and H’Nooka.

When G-d chose Moses to lead the Jewish people, He couldn’t have found a more recalcitrant candidate.

The 80-year-old shepherd from Midian didn’t want the job. For seven days, he sparred with G-d: He would fail; he wasn’t able to speak to Pharaoh; the Jewish people wouldn’t listen to him. His energy for debate never flagged.

Finally, Moses relented and in his first encounter, he failed. Pharaoh, as G-d had told Moses, refused to release the Jews. Instead, he made their slavery much more difficult. The Jews turned against Moses, whose Levite tribe was exempted from heavy labor, and the Midrash said he was driven out of Egypt.

Moses was not challenging G-d. He simply couldn’t understand how G-d would let this evil emperor intensify the oppression of the Jews. True, G-d had told Moses that Pharaoh would refuse the demand to leave Egypt, but that didn’t mean he would be allowed to punish the Chosen People.

Perhaps, Moses suggested, the time for redemption had not arrived. If so, why did G-d send him rather than wait for the appropriate moment? Now, Pharaoh was laughing at G-d, who remained silent. If the Jewish people did not deserve a miracle, did that mean that G-d’s name should be debased? The worst fears of Moses had come to pass.

G-d’s answer can only be described as historic, a primer for the fate of the Jews in their exile. Rabbi Chaim Bin Attar, known as the Or Hahayim, says G-d agreed with Moses: The time for redemption had not yet arrived. But this did not mean that G-d would tolerate the suffering of the Jews. He would accelerate the end of their slavery and save them from Pharaoh.

And that’s why G-d sent Moses on his mission: The Jewish suffering must end now. He told Moses that Pharaoh would not be allowed to hurt the Jews any longer. And the plagues began. During the first plague, the Egyptians fled their posts and the Jewish people were left alone. Some Jews, seeing this as a fleeting reprieve, continued to report to work out of fear of Pharaoh. But others understood that something had irrevocably changed and removed their chains.

And so began an interim period of 12 months until G-d was ready to redeem His people. In the meantime, an impotent Pharaoh would see the destruction of his country. The man who claimed he was god stood in front of his people naked.

Many sense the end of an era but few are prepared to act. During the last year of World War II, Germany retreated on all fronts. Yet, Hitler and his henchmen devised new ways of death — particularly the march of starving and barefoot Jews evacuated from concentration camps. The trigger-happy German guards shot stragglers or anybody who tried to grab a bite of food or scoop up rainwater. Until Germany’s surrender on May 8, 1945, up to 100,000 Jews died in these marches.

Some of the Jews, however, were determined not to obey. At Buchenwald, prisoners stormed the watchtowers and seized control of the camp on April 11, 1945. The Germans fled, leaving behind more than 21,000 inmates. Later that day, units from the U.S. 6th Armored Division arrived.

The Jews in Egypt were not deserving of redemption. But G-d was intent on keeping his promise to the patriarchs that the exile would end. The sages say that eventually the piety of Abraham, Isaac and Jacob would be insufficient to prevent future tragedies. This resulted in G-d’s silence as He saw the exiles of Babylon, Persia and Greece.

For the last 2,000 years, the Jews have been suffering under Edom, or Rome. The Midrash says G-d will not remain passive in face of the sins of Edom, who have spread hate against the Jews since the time of Esau. The Jews might not be prepared or even reject redemption, but G-d will respond to Jewish suffering.

In August 2005, the Israeli military, equipped, financed and directed by the United States, drove more than 10,000 Jews out of their homes in the Gaza Strip and northern West Bank. The expulsion marked a violation of numerous promises by Israeli governments that Jews would be allowed to settle the land.

On Aug. 22, residents of the last Jewish community, Netzarim, were expelled from their homes. On the very next day, a huge hurricane emerged from the Atlantic Ocean and destroyed the American city of New Orleans, also damaging communities throughout the east and north of the country. Around one million people saw their homes destroyed by floods. The very same Israeli military sent tons of food and equipment and even rescued abandoned pets of the homeless Americans.

The Midrash says that the disasters visited on Edom and its allies reflect the role of the Jews. The world is blessed because of Israel, and when it is oppressed likewise is the blessing removed. In Egypt, this resulted in the 10 plagues, which ranged from rampaging frogs to the death of every first-born.

But Moses could not see this. He was wrapped up in the pain of his brethren, beaten down by 86 years of slavery. He tried to talk to the Jews but they, monitored by their Egyptian masters, were unable to respond. G-d’s message was that He would employ mercy rather than justice. The end was near. Pharaoh was finished. Moses’ job had just begun.

“Therefore, say to the children of Israel, ‘I am the Lord, and I will take you out from under the burdens of the Egyptians, and I will save you from their labor, and I will redeem you with an outstretched arm and with great judgments.”