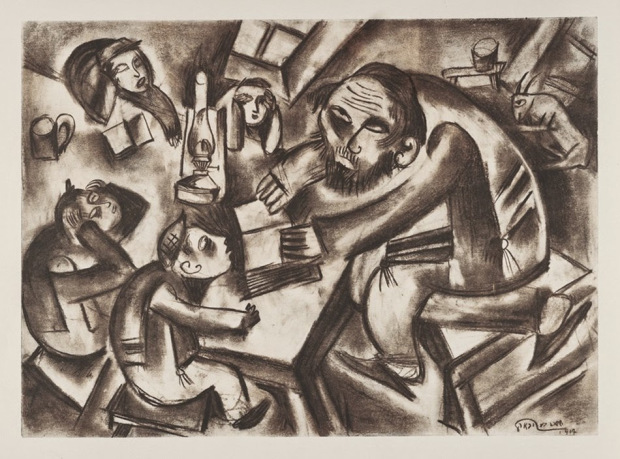 ed note–serious and dedicated students of modern political events, and especially those events that suffer from a disproportionate and destabilizing amount of Judaic influence/involvement need to understand the oftentimes tedious and otherwise uninteresting parameters as described in this piece.

As we point out here often, one simply cannot understand the nature of that aforementioned Judaic influence/involvement in today’s affairs without first understanding what is the mindset driving these people and their actions, both on an individual, collective and geo-political level.

Having said this, the basis upon which Gentiles need to frame their understanding of this mindset is in the recognition that for those making up Judea Inc, the past is always the present and the future. As we like to say here, while the rest of the enlightened Gentile world is living in the 21st century A.D., the Jews are still stuck in the darkness of the 21st century B.C., and it is this fact–their willing, witting refusal to abandon a way of thinking and a mode of life that had no foundational basis in any form of enlightened existence–that in large part explains the friction which attends virtually all events these days where they as an organized force hold any kind of sway.

As you read this piece, keep in mind that ‘H-nooka’ which is being celebrated now within almost the entirety of Judea, Inc is a celebration of the manner by which religious terrorists killed fellow Jews for refusing to remain ‘true’ to their Judaism. For daring to embrace the more civilized, advanced, and enlightened precepts of Greek Gentiles, those seeking liberation from the imprisoning aspects of Judaism–along with its 613 laws of such petty, meaningless extremism, narcissism, violence, and vacuousness–those seeking to detoxify themselves of the more noxious and unpleasant attributes and aspects of Judaism were hunted down and murdered by ‘JSIL’, otherwise known as the Jewish State in the Levant.

Moving all of this forward to the present day, we see in many respects a virtual play-by-play re-enactment of the very same events, as ‘western’ Jews who have been both Hellenized and Romanized just don’t seem to ‘get it’ with regards to what being a ‘true Jew’ is all about.

And make no mistake about it–this was not just some history lesson which our un-esteemed Hebraic author was trying to impart in this piece, a fact which he makes Kristol clear in the following passage–

The priest, Mattathias the Hasmonean, and those who followed him started the war at Hanukkah by inflicting casualties against Hellenic Jews. Knowing well that eradication of the authentic Jewish approach would mean eventual ruin both to the Jewish people and to humanity at large, the Hasmoneans had to rise up against the Jews who tried to detach them from their ultimate role to unite (“love your friend as yourself”) and pass that value of unity to the world (“be a light for the nations”).

–A veiled threat of what will happen to those ‘Hellenized’ and ‘Romanized’ Jews who today refuse to ‘get with the program’ of what it means to be a ‘true Jew’.

Also note the choking, suffocating narcissism of our ‘good’ Jewish author in that ‘disunity’ among the Jews will bring ‘ruin’ to humanity–i.e. Gentiles–whom Jews view as mere animals in need of Judaic guidance.

Also note, that our un-esteemed Hebraic author references in several places the Torah, which is indeed the beating heart of Judaism, despite what certain self-proclaimed Judaic ‘experts’ claim to the contrary.

The Mityavnim were Jews who embraced Hellenic culture over their own, including converts into the pagan Greek belief system.

Why Would Jews Go to War Against Each Other?

Wars between authentic and inauthentic Jews permeate the generations.

Since the establishment of the Jewish people, we have had to battle our evil inclination, that is, our natural, inborn egoistic attitude, which opposes unity and love for each other. There have always been those among us who refused to “lift the weight,” so to speak, resisting unity and dedicating themselves entirely to self-satisfaction.

Take Abraham and Nimrod as an example. Abraham’s escape from Babylon was due to social division. He discovered that uniting above differences was the cure for the division tearing society apart. However, he was persecuted by Nimrod, the Babylonian King, who had an interest in maintaining the status quo. (See Maimonides, Mishneh Torah, Ch. 1)

Moses’ story shows another example of the struggle between the authentic and inauthentic Jewish approaches: His devotion to collective love and unity “as one man with one heart” held the Jews together as a nation, saving them from escaping their tribes in pursuit of personal gains, which would gradually lead to their becoming their own enemies.

The problem with such deviators is that they weaken the spirit of unity and let divisiveness spread. Therefore, instead of an atmosphere of love, peace, wholeness, harmony, and happiness that come from uniting, there is a proliferation of hatred, conflicts, imbalance, tensions, and unhappiness. Ultimately, this leads to ego-fueled wars that amass suffering and torments.

Thus, the war at Hanukkah wasn’t over land. It was over the sustenance of the authentic Jewish approach to the Torah, i.e. upholding its principle tenet of uniting in brotherly love, “love your friend as yourself.”

“That which you hate, do not do unto your (Jewish) neighbor. This is the whole of the Torah” Masechet Shabbat, 31a.

The Jews who chose Hellenism renounced unity in favor of egoistic goals. They strove for power, control, and knowledge, and aimed to tempt authentic Jews to give in to those values.

The priest, Mattathias the Hasmonean, and those who followed him started the war at Hanukkah by inflicting casualties on Hellenic Jews. Knowing well that eradication of the authentic Jewish approach would mean eventual ruin both to the Jewish people and to humanity at large, the Hasmoneans had to rise up against the Jews who tried to detach them from their ultimate role to unite (“love your friend as yourself”) and pass that value of unity to the world (“be a light for the nations”).

Therefore, at Hanukkah, we don’t celebrate our repossession of land. We celebrate our victory over the inclination among us that would have blocked humanity’s and our chances to reach unity, love, peace and lasting happiness.

Hanukkah signifies the need to constantly fight the battle against our inner egoism in order to rise above it and discover a new, united world. When we persevere in the struggle to unite above our differences, then our differences strengthen our unity. Think of it like a large orchestra: many different instruments, pitch ranges, notes, rhythms and timbres that, playing harmoniously together, add to the richness of the overall music.

However, when we stop trying to unite above our differences, then our differences weaken us and make us susceptible to destruction. Less than two centuries after the Maccabees’ conquest, we gave in to the growing social division, which brought about the destruction of the Temple and the exile from the land of Israel.

However, our role in the world remains unchanged. In our modern times, the more social discord and its ensuing pains abound, the more people instinctively feel that the Jews are to blame for their problems. Thus, we see the rise in anti-Semitic crimes and threats.

As our world becomes ever more tense and violent, the threat of war fills our atmosphere like gas filling a small, closed apartment. All it takes is one spark of fire for the entire thing to go up in flames.

Therefore, we should use this Hanukkah, the Festival of Lights, to ignite the positive light that the world needs from us: the light of unity and love above the growing divisiveness.

Moreover, today, we Jews are more separated than ever, and we are faced with the same choice that Jews have faced throughout history, with even more intensity than ever: Either we light the candle of unity among us and become the example of unity that the world needs from us, or we continue ignoring it with a “business as usual” approach, “agreeing” with the growing divisive atmosphere and inviting it to swing back at us in full force.

Unity is how we defeat the division within and among us.

May we use this Hanukkah to realize our role to unite and be a positive example of unity to humanity and become modern-day Maccabees who win the war over our egoistic inclinations.

2 thoughts on “The War at Hanukkah was Between Jews and Jews, not Jews and Greeks”