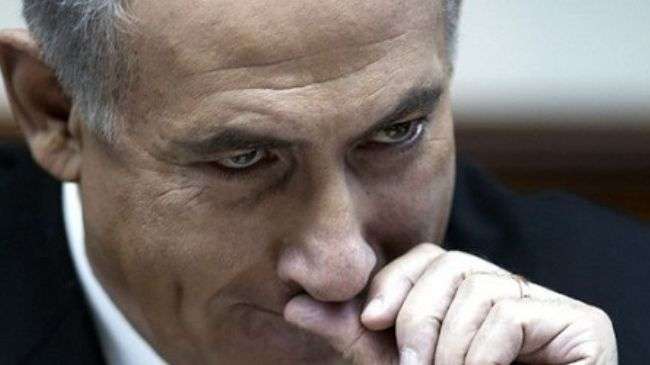 While in DC for signing of peace deal, Netanyahu’s son tweets support of convicted Jewish terrorist

ed note–several important ‘protocols’ to consider in all of this–

Firsto–a little background to the case itself…

The Jewish terrorist (Juhadist) whom Netanyahu-lite is supporting was convicted of INCINERATING TO DEATH a sleeping Palestinian family by throwing LIT MOLOTOV COCTAILS into their house. The only reason he received the conviction he did was because 14 BILLION GENTILE EYES were closely watching the case and Israel knew that she had to ‘do right’ otherwise the secret concerning the real ‘meat and potatoes’ making up ‘Jewish ethics’ would be revealed for what they really are.

The ugly truth of the matter is that the convicted Juhadist Uliel is considered as much a Jewish hero as is Baruch Goldstein, the Brooklyn-born medical doctor who entered a Mosque in the West Bank and machinegunned to death 29 Muslim worshippers as they prayed.

Now, the reason this story involving Nutty Netty-lite is important is because of what is taking place in DC at this very moment–

The signing of the ‘peace deal’ which Trump organized as a precursor to bringing about his ‘Ultimate Peace Deal’ between Israel and the Palestinians.

Allow us if we may.

But he can’t say this, so instead, he decides to send a coded message through his son to the ‘settler’ community in Israel that he is still ‘with’ them and that the only reason he is there for the signing of this deal is for appearances and as a ‘necessary political evil’ and that as soon as it can be arranged, either through Trump not being re-elected or some Mossad-engineered event such as another 9/11 that will be blamed on the Palestinians, that Nutty Netty will burn down this peace deal in the same way as the convicted Juhadist murderer/terrorist burned down the Palestinian family’s home with them sleeping peaceably within it.

As we like to say often but which unfortunately far too many people seem to forget, no one ever accused the Jews of being stupid.

Hours after Amiram Ben Uliel received three life sentences plus 20 years on Monday for the 2015 murder of three, Prime Minister Benjamin Netanyahu’s son Yair criticized the conviction and retweeted a link to a crowdfunding page for his continued legal battle.

Ben Uliel killed three members of the Dawabsha family — Saad, Riham, and their 18-month-old son Ali — in an arson attack. Only the couple’s eldest son, Ahmed, survived, despite terrible burns and scarring; he was 5-years-old at the time.

Yair Netanyahu retweeted a link to “Honenu,” a far-right legal aid group that offers support to what they call “soldiers and civilians who find themselves in legal entanglements, due to defending themselves against Arab aggression, or due to their love for Israel.”

Critics on Twitter called Netanyahu’s retweet of the fundraiser “surreal,” especially in light of the fact that his father was set to sign normalization agreements with the UAE and Bahrain on Tuesday in Washington. Yair Netanyahu is accompanying his father on the trip to the US.

Yair Netanyahu responded by saying that the conviction was disgraceful and lacking in evidence. He also claimed that Ben Uliel’s confessions linking him to the crime were obtained by the Israeli security services through “physical torture in the most medieval fashion you can imagine.”

The younger Netanyahu maintains an outsize and inflammatory presence on social media, and has drawn praise from white nationalists after sharing an anti-Semitic meme. There are currently four defamation lawsuits pending against him.

“Nobody disputes that Amiram’s confession, the only piece of evidence against him, was extracted from him through the use of torture…that is enough to justify his release,” the letter said.

Yitzhak Bom, an attorney for Honenu, echoed that sentiment when he said, “Our problem, of course, is not with the sentence. The main problem is that the court has accepted confessions that were extracted either after torture or under fear of torture in order to convict him.”

In addition to the prison sentence, the Dawabsha family will receive the maximum compensation for murder — NIS 258,000 ($75,000) — for each family member killed, as well as an additional NIS 250,000 ($58,000) for the attempted murder of Ahmed, the State Attorney’s Office said Monday.

Nasser Dawabsha, Ahmed’s uncle, said he was satisfied with the court’s decision, but it came too late for his family. No decision, he said, could restore the loss and hardship that the family had endured since the night of the fire in the village of Duma in the northern West Bank.

“This is the most we could have hoped for from an Israeli court. But we wish this decision could have come before the crime — that the Israeli government would have acted from the beginning. That they wouldn’t have allowed the settlers to come and act with their protection,” said Dawabsha.