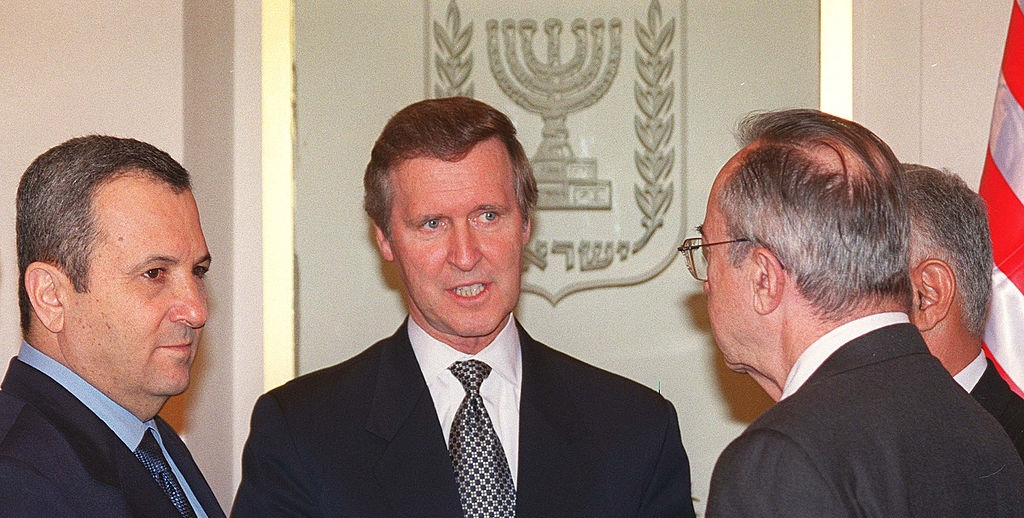 ed note–Those who are fans of gangster movies will recall the ‘protocols’ that are inherent in the gangster lifestyle, including the use of language and how to get across certain messages in just a few innocuous words where ‘clarity’ can be a legal liability.

One of those ‘protocols’ is the use of the terms ‘a friend of mine’ vs ‘a friend of OURS’, intimating that said subject of the conversation was either on the outside of the inner circle (and therefore not privy to hearing incriminating talk) or on the inside and therefore possessing a ‘security clearance’ that made them part of the gangster machinery.

Having said that, the fact that an overtly-Jewish/Zionist/Israeli news outlet would choose to home in on the statement–‘We are in danger’–made by the only Jewish Sec. of Defense appearing in the recent ‘GET TRUMP’ letter signed by his 9 other confreres says a lot about what that particular statement really means.

Of course, it is all couched in the typical one-dimensional verbiage that carries with it no APPARENT deeper meanings, no different than the ‘friend of mine/friend of ours’ language which career criminals use when communicating with each other, but when examined through the lens of multi-dimensional analytics/optics, the real meaning becomes, well, ‘Kristol clear’.

Each and every one of the 10 Secs. of Defense are ‘deep staters’, and that ‘Deep State’ for which they owe their allegiance is the one headquartered in Joo-roo-salem. During their various tenures/terms as Secs. of Defense, each and every one of them did what was required of them in furthering the interests of Israel, which included–among many other things–embroiling (or laying the groundwork for) the United States being thrown into that ‘clash of civilizations’ which the pirates of Judea have been planning ever since their infernal temple and their infernal ‘state’ was put to the God-ordained torch by the Romans 2,000 years ago.

Having said this, Cohen–on a 2 dimensional level–in his use of the word ‘we’ is speaking not only to the other assembled former Secs. of Defense who stand to lose everything if DJT in his 2nd term goes ‘full-auto’ in his draining of the swamp and destruction of the deep state in their possibly/likely being prosecuted and convicted of high crimes and misdemeanors during their various roles as Secs. of Defense, BUT AS WELL AND EVEN MORE IMPORTANT, the use of the word ‘WE’ in the more ‘personal’ sense on the part of the ‘priestly class’ Cohen, as in

etc, etc, etc…Also, please note, appearing at the very tail end of this piece, the fact that the ‘idea’ for having these 10 former Deep Staters writing this OpEd against Trump originiated with–

For those who are unaware, Edelman is indeed of the Hebraic persuasion and part of the ‘inner circle’ of Neocons who not only got the entire ‘clash of civilizations’ going in the aftermath of Israel’s 9/11 attacks, but as well, has been an open and fervent enemy of DJT.

In an interview which Edelman did with Bill Kristol, the spy/asset/terrorist Kristol opened the discussion thus–

In an extraordinary rebuke of U.S. President Donald Trump, all 10 living former secretaries of defense are cautioning against any move to involve the military in pursuing claims of election fraud, arguing that it would take the country into “dangerous, unlawful and unconstitutional territory.”

The ten men, both Democrats and Republicans, signed on to an opinion article published Sunday in The Washington Post that implicitly questioned Trump’s willingness to follow his Constitutional duty to peacefully relinquish power on Jan. 20.

Veteran journalist Susan Glasser commented that the letter itself raises concerns, writing, “The very worrisome question is why all 10 living former Secretaries of Defense, including Trump officials Esper and Mattis, chose to speak out now. What is the scenario they are worried about?”

Former Republican Senator from Maine and Bill Clinton’s Secretary of Defense William Cohen explained on CNN the thinking behind the letter, saying, “All of us [10 living defense secretaries] came to the same conclusion that we are in danger, that we have a commander-in-chief who is not above trying to use the military in order to achieve a political objective.”

William Perry, who succeeded Cohen, also revealed Monday that it was former Vice President Dick Cheney who initiated the letter.

Following the Nov. 3 election and subsequent recounts in some states, as well as unsuccessful court challenges, the outcome is clear, they wrote, while not specifying Trump in the article.

“The time for questioning the results has passed; the time for the formal counting of the electoral college votes, as prescribed in the Constitution and statute, has arrived,” they wrote.

“Efforts to involve the U.S. armed forces in resolving election disputes would take us into dangerous, unlawful and unconstitutional territory,” they wrote. “Civilian and military officials who direct or carry out such measures would be accountable, including potentially facing criminal penalties, for the grave consequences of their actions on our republic.”

A number of senior military officers, including Gen. Mark Milley, chairman of the Joint Chiefs of Staff, have said publicly in recent weeks that the military has no role in determining the outcome of U.S. elections and that their loyalty is to the Constitution, not to an individual leader or a political party.

The 10 former Pentagon leaders also warned in their Post article of the dangers of impeding a full and smooth transition at Defense Department prior to Inauguration Day as part of a transfer to power to President-elect Joe Biden. Biden has complained of efforts by Trump-appointed Pentagon officials to obstruct the transition.

Without mentioning a specific example, the former defense secretaries wrote that transfers of power “often occur at times of international uncertainty about U.S. national security policy and posture,” adding, “They can be a moment when the nation is vulnerable to actions by adversaries seeking to take advantage of the situation.”

Tensions with Iran represent just such a moment. Sunday marked one year since the U.S. killing of Qassem Soleimani, the top Iranian general; Iran has vowed to avenge the killing, and U.S. officials said in recent days that they are on heightened alert for potential Iranian attack on U.S. forces or interests in the Middle East.

In a further sign of U.S.-Iranian tension, the acting secretary of defense, Christopher Milller, announced Sunday evening that he has changed his mind about sending the Navy aircraft carrier, the USS Nimitz, home from the Middle East and instead will keep the vessel on duty. Just last week, Miller announced that he was sending the Nimitz home, a decision that had been opposed by senior military officers.

In reversing himself, Miller cited “recent threats issued by Iranian leaders against President Trump and other U.S. government officials.” He did not elaborate, and the Pentagon did not respond to questions.

The opinion article in the Post was signed by Dick Cheney, William Perry, Donald Rumsfeld, Cohen, Robert Gates, Leon Panetta, Chuck Hagel, Ash Carter, James Mattis and Mark Esper. Mattis was Trump’s first defense secretary; he resigned in 2018 and was succeeded by Esper, who was fired just days after the Nov. 3 election.

The Post reported that the idea for writing the opinion piece began with a conversation between Cheney and Eric Edelman, a retired ambassador and former senior Pentagon official, about how Trump might seek to use the military in coming days.