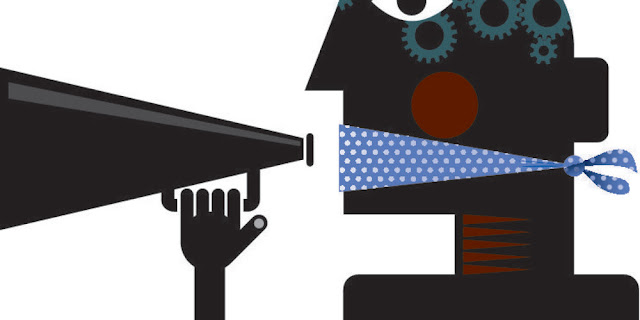 Appearing before House committee, Jonathan Greenblatt says Silicon Valley firms should have tackled anti-Semitism proliferating on their platforms long ago
ed note–honest persons engaged in honest activities have nothing to fear in terms of an informed public knowing their business. Only criminals and gangsters with something to hide need laws protecting them from the prying eyes of the public. Notice there are no Catholics, Mormons, Lutherans, or anyone else for that matter lobbying Congress for special protections shielding them from an honest accounting of their deeds.
The ugly truth however is that OJI aren’t the only ones to blame for this. Naturally, given the fact that they ARE indeed engaged in criminal activities means they are going to do what all gangsters are organically programmed to do, i.e. engage in witness intimidation.
However, what must be noted is that they are IMMEASURABLY assisted in this endeavor by idiots of the non-Hebraic persuasion, and of those, none more indispensably invaluable in this regard than those of the White Nationalist pedigree. As events have proven, at the EXACT MOMENT that OJI need something to blow up and make headlines that then assists them in making their case for increased Federal regulation of free speech (or whatever) there is INVARIABLY something akin to fiascos such as Charlottesville, replete with white-robe-wearing KKK members, ‘militia’ guys strutting around with AR15s locked-n-loaded and an entire swarm of Neo-Nazis proudly waving their 3rd Reich flags and doing the ‘stiff arm’ thingy without considering for a micro-second how all of this is assisting the very enemies against whom they claim to be fighting.
And yes, it’s tempting for those of us operating with a certain degree of skepticism to say all of this was just a ‘set up’ and that the aforementioned players were ‘plants’ sent in by ADL or whoever to create that spectacle, but an honest examination of what passes for ‘the movement’ these days forces such skeptics to acknowledge the fact that there are indeed PLENTY of idiots ready/willing/able to perform such tasks all by themselves without needing any prodding from ‘outside actors’.
Times of Israel
The head of the Anti-Defamation League told House lawmakers Wednesday to craft legislation that would force social media giants to take neo-Nazis and others spewing anti-Semitic hatred off the platforms if the companies won’t do so on their own.
In testimony before the House Committee on Homeland Security, Jonathan Greenblatt said that the rise of anti-Semitic incidents in the United States was due, in part, to bigoted voices being amplified on Facebook, Twitter, and other websites.
“It’s long overdue for the social media companies to step up and shut down the neo-Nazis on their platforms,” Greenblatt told the legislators. “Companies like Twitter and Facebook need to apply the same energy to protecting vulnerable users that they apply to protecting their corporate profits.
“If they won’t answer the problem,” he added, “you probably need to.”
Greenblatt encouraged passage of the Online Safety Modernization Act, which would ramp up enforcement of and toughen the penalties for online harassment and cyber crimes.
He acknowledged that Facebook, Twitter and Reddit have recently implemented more regulations, but said they hadn’t gone far enough to stamp out anti-Semitic vitriol on their platforms.
Over the last several years, concerns about anti-Semitism have intensified as the rate of anti-Semitic episodes have increased.
Recent data from the ADL shows that anti-Semitic incidents are soaring in the United States. In 2018 alone, there were 1,879 recorded anti-Semitic episodes, according to the Jewish civil-rights organization, 13 percent of which were carried out by white supremacists. That includes the Pittsburgh Tree of Life synagogue shooting, which killed 11 people, the deadliest ever anti-Semitic attack on American soil.
Orthodox Union policy director Nathan Diament told the lawmakers that Jews in the US “are afraid in a way we have never been before.”
“We are under threat of violence as we walk down a city street or enter our synagogues to pray,” he said.
“Jews were gunned down at prayer in synagogues in Pittsburgh and Poway and shopping for kosher groceries in Jersey City.  Visibly identifiable Jews – Orthodox Jews and Hasidic Jews – have been assaulted on the streets of New York, Miami and elsewhere.”
In opening remarks, Intelligence and Counterterrorism Subcommittee Chairman Max Rose, a New York Democrat, said extremists were being emboldened by social media content.
“The government should be encouraging social media companies to prioritize the removal of terrorist content—including violent anti-Semitic content—in order to prevent online hate from turning into real-life violence,” he said.
In the past, Greenblatt has called on the Silicon Valley social media behemoths to implement stricter rules to weed out anti-Semitic and other racist, hateful content.
The main remedy, he told the Times of Israel in December, was to kick users off who post anti-Semitic vitriol, which he said was tantamount to screaming anti-Jewish slurs at a coffee shop or a restaurant — in which case, the managers would make you leave.
“If you go to Facebook or YouTube or Twitter or any of these platforms, and you say terrible things about Jewish people, or Mexican people, or Muslim people, they should kick you out,” he said. “These are businesses. These are not free speech zones — they are governed by the same laws as Starbucks and the salad place.”