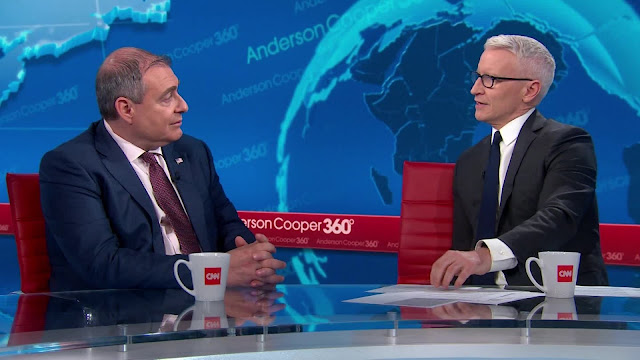 ed note–once again, for all those who doggedly refuse to see the Israeli angle to all the present Impeachment business involving DJT, POTUS and who refuse to believe even in their own rhetoric concerning Congress being Zionist-Occupied Territory.
JTA
Donald Trump Jr., son of the president, said that when he met Lev Parnas he thought the Ukrainian-American businessman was Israeli.
Trump Jr. told Fox News’ Maria Bartiromo on Sunday that he and his father took photos with Parnas at political fundraising events, but that is as far as their relationship goes. Parnas is charged with campaign finance violations related to the Trump-Ukraine scandal.
“I met him at fundraiser events,” Trump Jr. said. “He was a donor at a super-PAC, shows up to some of these things like anything else. Honestly, I think it’s funny, I didn’t realize he was Ukrainian. I thought he was Israeli.”
Parnas allegedly helped Trump’s personal attorney Rudy Giuliani coax Ukrainian officials to investigate Democratic presidential candidate Joe Biden and his son over the latter’s seat on the board of Burisma Holdings, a major Ukrainian natural gas producer. Parnas and another Ukrainian-American Jewish businessman, Igor Fruman, have pleaded not guilty to charges of campaign finance violations related to the scandal.
House impeachment investigators released material that Parnas had turned over to them including text messages, photos and calendar entries.
“He was aware of all my movements. I wouldn’t do anything without the consent of Rudy Giuliani or the president,” Parnas told MSNBC’s Rachel Maddow last week.
Trump has denied knowing Parnas and Fruman, though there are several photos of them together, and there are reports that Fruman and Parnas had a private meeting with Trump and Giuliani during a White House party in December 2018.
Parnas has said that he will release a new photo of Trump and himself every time the president denies knowing him.