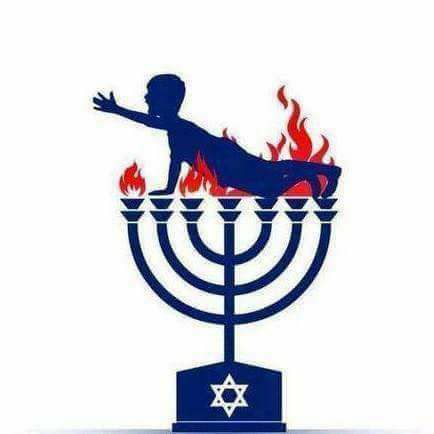 ed note–as covered and discussed here extensively as of late, a proper understanding of the true scope of what encompasses the Judaic celebration of Hanukkuh (or as the late, great, and greatly-missed Mike Piper used to refer to it–‘H’nooka’) is absolutely intrinsic to understanding the nature of the war which Judea, Inc is waging today against the West.

Contrary to the manner in which it is presented for public consumption, it is anything but harmless or beneficent. It is not ‘Jewish Christmas’ whose beating heart is latkas, lights, laughter, and lightheartedness.

At its core, it–like its twin twisted sisters Passover and Purim–is yet another celebration of Gentile-cide in what came to be known as the Maccabean war which featured religious nutcase Jews who engaged in Juhad, first against their fellow Judaites (who sought liberation from the suffocating death grip of Torah Judaism and its 613 rules and regulations handed down by Moses) and then against the Syrian Greeks themselves who were/are seen as ‘corrupters’ of the backwards and barbaric protocols of Judaism via Greek enlightenment known as Hellenism.

What makes this piece so important to read is the fact that as of late, there has been a disproportionate amount of Judaic commentary trying to keep H’Nooka exactly where OJI need it to remain if the long term plans of Judea Resurrecta are to proceed–i.e. the harmless, beneficient celebration featuring lights, latkes, lightheartedness and laughter, rather than what it truly was–a religiously-mandated slaughter of ‘heretic’ Judaics and then from there, the expansion of ‘Greater Israel’ and then the war against Western (Greco-Roman) civilization itself.

Our unesteemed rabbinic author makes it clear that indeed–contrary to all the fluff that is put out for public consumption–that indeed H’Nooka was Juhad against fellow Judaics, but as well, why this fact has been kept hidden from public view for strategic purposes, to wit–

‘Because if the Gentiles knew the truth about the great Jewish civil war 2,100 years ago, we would appear in a bad light. Therefore, only the truly educated know the whole story.’

We are usually taught that Hanukkah commemorates our victory over the Syrian Greeks and the restoration of the Temple service.

The truth is, however, that while the revolution against the Greeks was undoubtedly important, the crux of Hanukkah was the civil war between the Hellenized Jews and the minority of faithful Jews led by Matisyahu and his children.

After all, let us remember that the whole saga began in Modi’in where Matisyahu slew a Jew who acceded to a Greek request to consume pig. He and his children subsequently waged war against the Syrian Greek army, but their primary goal was spiritually purifying Klal Yisrael from foreign influences.

Indeed, a liberal professor 12 years ago wrote an article in the left-wing Forward newspaper expressing dismay that liberal Jews celebrate Hanukkah considering that it celebrates the victory of religious extremists over “enlightened” Jewish Hellenists!

What we celebrate on Hanukkah is primarily the Maccabees’ victory in purging the nation of alien Greek influences that corrupted our thoughts, speech, and deeds.

If I am correct then, why are so few Jews aware of this fact?

Because if the Gentiles knew the truth about the great Jewish civil war 2,100 years ago, we would appear in a bad light. Therefore, only the truly educated know the whole story.

But those who are enlightened on the truth of Hanukkah have an obligation to spread the word so that other Jews can come out of the darkness. For truly one of the greatest problems in our time is the adulteration of Jewish values by modern Western liberal ideas. Too many of us let these ideas permeate our souls, causing us to twist – or ignore – the Torah’s words on crucial matters debated in the public square.

So on this Hanukkah, let us examine the deepest recesses of our hearts with the light that shines on this holiday. And if we find anything within us that contradicts authentic Torah Judaism, let us purge it from our being and rededicate the entirety of minds, bodies, and souls to Hashem and to His Torah which will lead us to the final redemption, may it come soon.

3 thoughts on “Exactly what is it that we Jews are celebrating on Hanukkah?”