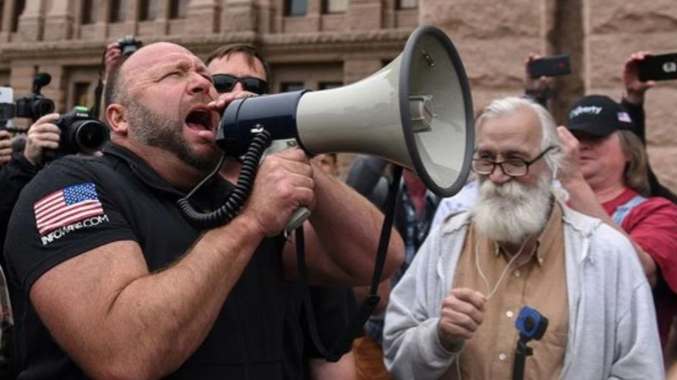 ed note–Not necessarily wanting to say ‘we told ya so folks’, well, no, take that back, that’s exactly what we’re saying–we told ya so.

This is what happens when someone takes a detour off of the straight and narrow path known as the truth and heads down the road to Crazyville. In the aftermath of the ‘Sandy Hook never happened’ madness that swept like a brainfever through the ranks of those making up the ‘trooth muuvmnt’ and helped along in that regard by head cases such as Jones, Fetzer, Gordon Duff, John Friend and a gaggle of helpers & hangers-on, they destroyed whatever tiny strands of credibility this ‘muuvmnt’ had managed to acquire in the aftermath of the Israeli-engineered terrorist attacks on 9/11.

What’s worse is the fact that this operation–rooted in destroying this ‘muuvmnt’s’ credibility, was a plot visible from a mile away to those who bothered to look at it through rational eyes. The brainchild of none other than Cass Sunstein, Obama’s ‘Information Czar’, it was deliberately concocted in order to forever destroy any interest in ‘alternative’ explanations for what is really going on in our world and who/what is behind it.

And Jones & co swallowed it whole-hog, and now like a fish with a hook in its mouth, the ‘muuvmnt’–as a result of those unstable elements and the unwillingness on the part of the ‘rank-and-file’ to try and squelch it out before it became the pandemic that it did–can’t get away from it–ever.

But the ‘snub’ on the part of Gen. Flynn is only the tip of the iceberg in terms of the opportunities lost by Jones & co. In playing the game ‘what if’, we can see what COULD have come about in this age of Trump where ‘conspiracy theories’ are not the tar baby they once were, where we have a President with a HUGE following and fan base and where substantive, intelligent, respectable discussions COULD have been started involving JFK, USS LIBERTY, the Federal Reserve, 9/11, the truth surrounding WWII, etc, etc, etc, IF Jones and company had not taken the bait that was offered to them.

Not anymore. Figures like Flynn, with huge numbers of people supporting them, won’t touch Jones or any of the aforementioned important subjects with a ten-foot cattle prod, and the worst part of it is that this controlled demolition of the ‘911 truth movement’ wasn’t done from the outside, but rather from within by mentally unstable ‘leaders’ (and their equally-mentally unstable followers) who wouldn’t take that rat-poisoned lollypop out of their mouths and even when it was proven to be deadly.

Yeah, we told ya so.

Flynn hasn’t shied away from the Republican Party’s fringes after the president gave him a November pardon, appearing on QAnon podcasts and calling for Donald Trump to impose martial law. But palling around with Jones, apparently, was too much for the former lieutenant general.

“Crazy day, huh?” Jones said as he approached Flynn backstage at the Dec. 12 rally, in an awkward exchange captured on video.

“It is a crazy day,” Flynn said, arching his eyebrows at Jones as Flynn’s bodyguards prevented Jones’ followers from getting closer.

Flynn didn’t turn to face Jones, and Jones eventually had to reach out and shake Flynn’s hand himself. Snubbed, Jones walked away, mumbling about the interaction being “funny.”

More than a week later, Jones is still grumbling about the brush-off.

“General Flynn ran away from me!” Jones said on a Monday broadcast of his show.

Getting the cold shoulder from Flynn was just the latest blow to Jones and InfoWars in the wake of Trump’s election defeat. InfoWars hit new heights in Trump’s first term, with the president and other Republicans appearing on Jones’ show and Trump retweeting InfoWars videos and defending its staffers from social media takedowns.

But the conspiracy theory hub, like other right-wing media outlets, has been thrown into turmoil in the aftermath of the election, facing firings, budget cuts, and accusations from a former host that the site has gone too soft on the president. As Jones tries to find a footing in the post-Trump world, he’s facing competition from better-produced rivals like One America News and Newsmax, which have promoted conspiracy theories of their own.

“I was just fired by Alex effective immediately,” Knight, the rare InfoWars host to not already be banned by Twitter, tweeted shortly after his ouster.

Knight and InfoWars didn’t respond to requests for comment.

Jones often complains about budget issues at InfoWars, usually before segueing into a pitch for the brain pills and other remedies sold under InfoWars branding.

InfoWars continues to face legal bills and potential hefty future judgments from lawsuits in Connecticut and Texas over Jones’ attacks on the families of children killed in the 2012 Sandy Hook massacre. But that budget crunch didn’t stop InfoWars from recently buying a hulking “battle tank.”

At first, Jones blamed Knight’s exit on money issues. Then, when Knight disputed that on Twitter, Jones claimed Knight left the site over his own health issues, including a 2018 heart attack.

Knight tells a different story. Shortly before his firing, he had attacked frequent InfoWars guest Steve Pieczenik, accusing the Jones favorite—who has spun out wild conspiracy theories meant to prove that Trump won the election—of being a “CIA con-man.”

Knight also attacked Trump himself, claiming that the president was clamping down on American liberties by banning “bump stock” gun attachments, backing some coronavirus restrictions, and promoting vaccines. Knight claimed that Jones and InfoWars had ignored these issues.

“We have been straining at gnats with Democrats, and we swallow a camel when it is Trump,” Knight said in a Monday video.

As Knight continued to dispute Jones’ earlier explanations for his firing, Jones changed course, claiming in a Monday broadcast that he had indeed fired Knight for criticizing InfoWars’ editorial stance for Trump. Asked by a caller about why Knight was fired, Jones began beating his chest and chanting, “He doesn’t want us!”

“He was so miserable and so mad about my views and that’s why I asked him, ‘Fine, just go,’” Jones said before cackling, “Ahaha, I love it!”

Knight was a key part of InfoWars’ brand, hosting his own show since 2017 with a more sedate approach that appealed to viewers turned off by Jones’ bombastic style. Knowledge Fight, a podcast that tracks InfoWars, dubbed Knight “the most boring person who has ever been allowed to anchor their own show.”

But Knight isn’t the only one-time InfoWars personality to get the boot. InfoWars also appears to have cut its evening show, which featured QAnon conspiracy theorist DeAnna Lorraine Tesoriero, a decision Knight claimed was prompted by the InfoWars show getting crushed on a nightly basis by Tucker Carlson’s Fox News show. InfoWars also appears to have stopped sponsoring conservative personality Kaitlin Bennett, the so-called “gun girl” whose job consisted primarily of baiting liberal college students into viral-ready exchanges.

Even Jones’ teenage son, Rex Jones, has quit the site, complaining in an appearance on a right-wing internet show last week that InfoWars had failed to develop his talent and squelched his own attacks on Trump.

Jones is even struggling to gain traction in the one place where he should be a star: Trump rallies. At the same rally where he was snubbed by Flynn on Dec. 12, Jones tried to rush the stage as former InfoWars reporter Millie Weaver spoke.

Jones had fired Weaver from his site in August, after she was arrested for allegedly robbing her own mother (the charges were later dropped). Bad blood has persisted between the two. And when Jones attempted to interfere with her rally speech, security easily blocked him from reaching the stage. Weaver managed to speak over the handful of InfoWars diehards chanting Jones’ name.

In his Monday video, Knight claimed he saw early signs of InfoWars’ divided editorial policy in the age of Trump in a conversation he had with Jones shortly after Trump was elected. Knight said he had urged Jones to avoid becoming a lapdog for Trump’s policies, but found Jones noncommittal.