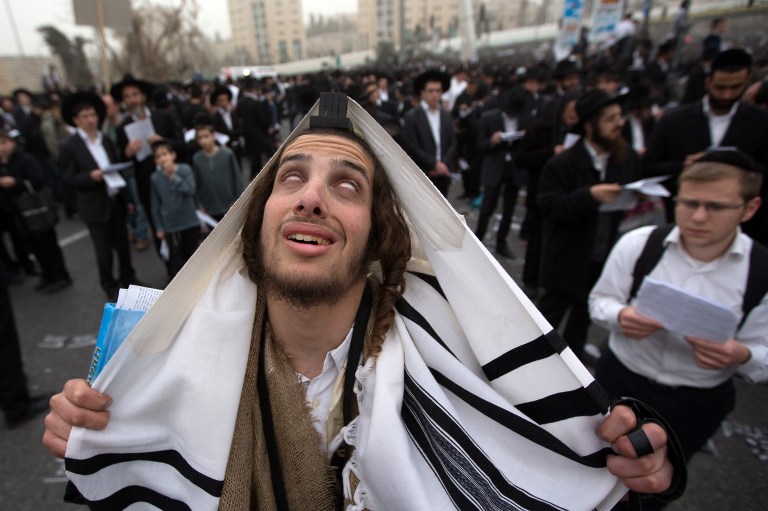 ed note–jeez, where do we even begin in discussing something as deranged as this?

The first thing to note is that this is a primary example of Judaic Derangement Syndrome that has afflicted followers of the cult of Judaism for thousands of years and the primary–albeit not the solitary–cause of ‘anti-Shemitism’. Like any sickness of the body symptomized by fever, hallucinations, and delusion, likewise, it has always been this way with Judaism and well before the words ‘Theodore Herzl’ were ever hatched in the mind of Satan.

Now, for the purposes of better understanding what this latest example of JDS means for the rest of the 7 billion souls residing on God’s green earth, keep in mind that our deranged Hebraic writer is not alone in his thinking. Many, many more of his co-tribalists see things in exactly the same terms as he does, and some of them occupy some of the highest places of power in the world and who have at their immediate disposal the power to crash economies, start wars, create epidemics, assassinate political figures, and yes, launch/detonate nuclear weapons.

Now, the fact that the ‘Corona Virus’ is by comparison to the flu a relatively low threat (in the US alone, somewhere between 150-200 people A DAY die from it in a year’s time) the logical question must be asked WHY the JMSM is expending so much effort in getting everyone all worried and worked up over this new sickness that–as we just noted–poses nowhere NEAR the same threat to public health that the ordinary flu does.

And yes, it is rather interesting to note that this new virus JUST SO HAPPENED to become the topic of discussion in immediate proximity to the moment when Trump decided to unleash the details of his ‘peace plan’.

Breaking Israel News
On Tuesday, Breaking Israel News reported on the long history of catastrophes accompanying the process of dividing the land of Israel.  More than a dozen synchronicities create an unmistakable pattern; any country that pressures Israel into relinquishing the land God promised them in the Bible has been immediately targeted by divine retribution. Some of these instances had the individual politicians suffering political setbacks or personal loss as a result of touching the Apple of God’s Eye.
The ‘Deal of the Century’ was off to a difficult start. In August 2017, the Trump Administration’s Middle East negotiating team, led by Jared Kushner and Jason Greenblatt, visited the region in an attempt to jump-start peace talks. Ten days later, Hurricane Harvey, described as the “worst disaster” in Texas history, made landfall, slamming the Corpus Christi region of Texas with 130 MPH winds and 13-foot storm surges.
President Trump formally unveiled the plan in a White House press conference alongside Israeli Prime Minister Benjamin Netanyahu on January 28, 2020, and true to form, two days later, three weeks after China first reported the outbreak, the World Health Organization declared the coronavirus to be a global emergency and the U.S.
End-of-days blogger Dov Bar Leib did not think the coincidental nature of the events was random.
“The coronavirus was literally incubating while the ink was drying on the peace plan,” Bar Leib told Breaking Israel News.
On the same day as the announcement of the plan, the U.S. issued a travel advisory telling Americans not to visit China. This coincided with the Chinese Lunar New Year. The government decided to take the opportunity to extend the holiday, closing financial markets for an additional three days until February 3. Many of the markets are still closed.
Bar Leib noted that the two events entered the world in the first day of the Hebrew month of Shevat.
“According to Jewish sources, the month of Shevat is when Hashem determines the sustenance that will be provided to the world in the following year. This is referred to in the Mishna (Peah 1:1) as פירות (peyrot: fruit) of this world as opposed to the Keren Kayemet (horn of existence) which is our reward in the world to come. These both are determined in the first two weeks of this month.”
“In the month of Shevat before the arrival of the Messiah, the evil people will not receive sustenance and they will begin to lose control of the world.”
“Keren is closely related to the word ‘corona’ which is derived from the Latin word for ‘crown,’ and–
The name of the virus hints that it is the key that will change the existing order and governance of the world.”
In fact, despite being a health issue, Bar Leib noted that the pandemic is already having far-reaching effects on the global economy. The Shanghai Composite index closed nearly 8% lower, its biggest daily drop for more than four years. The People’s Bank of China (PBOC) unexpectedly lowered short term interest rates and pumped an extra 150 billion yuan ($22bn; £16.3bn) into the economy on Monday. China’s economy is the second-largest in the world and is intertwined with the world’s largest economy in the U.S.
Numerous factories have suspended production while companies have instructed employees to work from home. Foxconn, Toyota, Starbucks, McDonald’s and Volkswagen are just a few of the corporate giants to shut down production in China due to the virus.
“In the year preceding the Messiah, evil people will not receive their sustenance. They have lost their blessing of sustenance in this world. The world will pass over into the hands of the Messiah. This change will take place in the month of Shevat.”
“The only blessing available to countries outside of Israel right now will come from Israel. Trump has been blessed with enormous prosperity until now because of all the things he has done for Israel. If this plan turns out to be bad for Israel, all the sustenance that was planned for the U.S. will just dry up. The factors that will bring this about are already in place.”
“China is the actual producer for most of the world,” Bar Leib said. “They are the sweatshop nation. If they have a problem providing cheap labor, that will have global implications.”