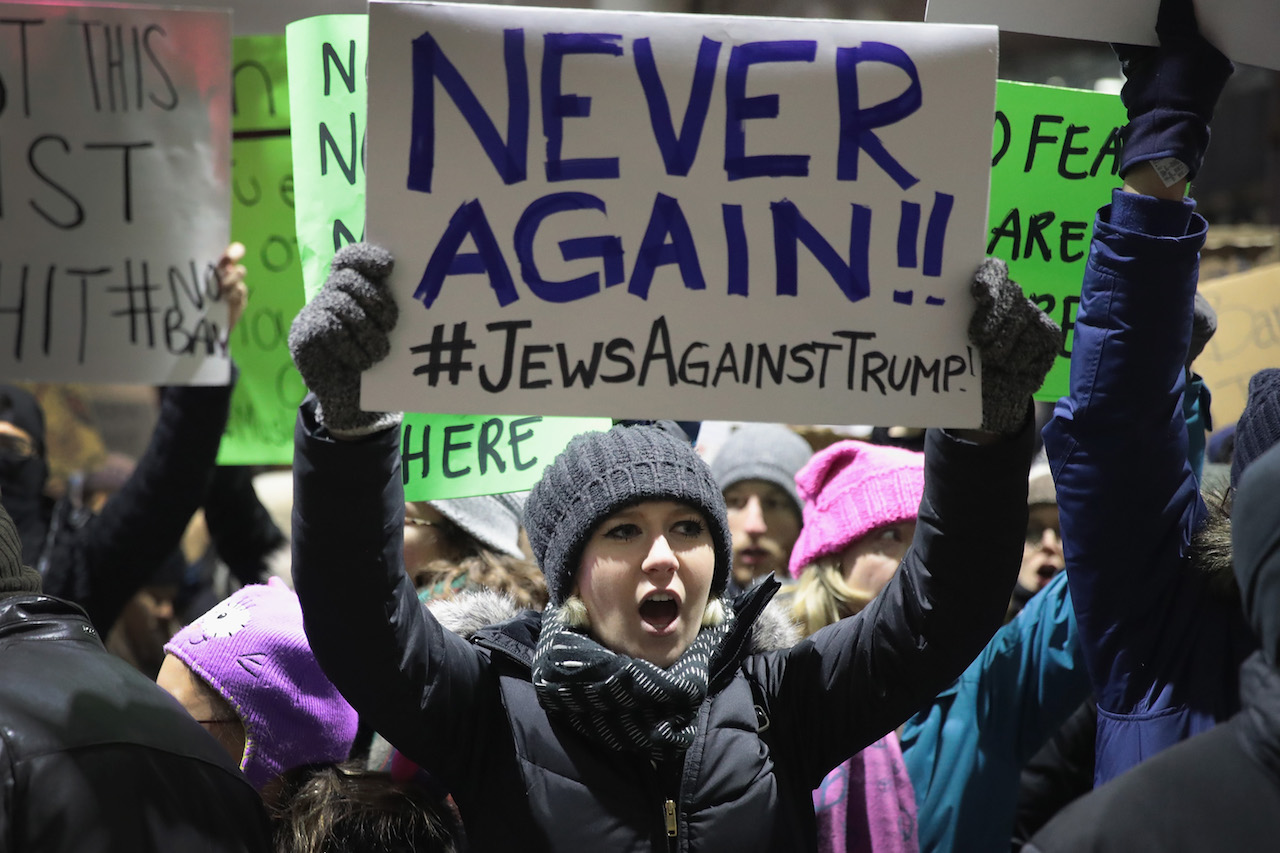 ed note–and, once again, ladies and Gentile-men, what needs to be understood about all of this is that the author of this piece, Jennifer Rubin–

IS A WELL-RESOURCED, HIGHLY-PLACED OPERATIVE IN THE PAID EMPLOY OF ISRAEL AND OF BENJAMIN NETANYAHU. SHE, ALONG WITH THE REST OF THE NEOCON CABAL, HAS BEEN ENGAGED IN AN OPEN CONSPIRACY AGAINST THE PRESIDENCY OF DJT SINCE HE ANNOUNCED HIS CANDIDACY IN THE SAME MANNER AS THEY WERE AGAINST PREVIOUS PRESIDENTS WHO ACTED IN WAYS CONSIDERED ‘INSUFFICIENTLY SUBMISSIVE/RESPONSIVE’ TO THE DEMANDS OF JUDEA, INC.

At issue as far as Rubin & co are concerned is the fact that DJT has made his top priority as POTUS the ending of America’s involvement in the ‘never-ending wars’ which Israel got started with the Mossad-engineered terrorist attacks of 9/11, in effect, his planned ‘9/11 U-turn’.

It is this–as well as DJT’s plans for bringing his ‘Deal of the Century’ that will–once implemented, cage in the Judaic virus and prevent it from taking over the entire Middle East–that explains in toto why the US and indeed the world has witnessed the kind of UNPRECEDENTED political instability and noise over the last 5 years.

Former New Jersey governor Chris Christie — a well-known Trump ally — and Sen. Bill Cassidy (R-La.) at least had the decency during their Sunday show appearances to recognize that Joe Biden won the presidential election and to deplore the Texas lawsuit seeking to overthrow our democracy. What they did not say, however, is disturbing.

Cassidy acknowledged on CNN’s “State of the Union” that Biden “is the president-elect. He has 270 electoral college votes. We’re the law-and-order party. We are a nation of a Constitution. We’re a nation of laws and courts that interpret those laws.” He added: “And this is how it breaks out, and the courts have ruled, then President Biden’s going to be our next president.”

Christie conceded on ABC’s “This Week” that “the legal theory put forward by his legal team and by the president is an absurdity.” He added, “And the reason why the Supreme Court didn’t take it is because it’s an absurd idea to think that any state or any number of states, no matter how good they are, can challenge another state’s right to run the election as they see fit.” Christie even acknowledged that there is “no evidence” of widespread fraud and deplored “the attacks by the president on good, hard-working, decent Republican governors.”

So do they regret their support for Trump, who is undermining our nation’s system of government? Nope. Will they denounce colleagues who would subvert the will of the voters in the most jaw-dropping betrayal of the United States by elected House members since the Civil War? Silence.

That is a problem.

There is a tension in defending the election outcome, recognizing Biden’s win and denouncing the ridiculous lawsuits but not separating from, seeking to hold accountable or disowning a party that is behind this authoritarian skulduggery. They are letting their fellow Republicans off the hook because they still have not grasped that duty to country should always outweigh duty to party.

CNN’s Jake Tapper wrapped up his show with some typically insightful remarks. “President Trump did us a favor by exposing these elected officials,” Tapper said of the Republican officeholders who brought or signed onto the Texas lawsuit seeking to throw out other states’ votes. “They are definitionally people who signed on to a desperate desire to subvert the will of the American people, to disenfranchise voters in Georgia, Pennsylvania, Wisconsin and Michigan based on lies and conspiracy theories, putting an immoral and corrupt power grab above democracy.” Tapper observed that “now we know clearly how much these individuals care about facts or truth, how much they care about democracy, or the principles that make this country great, which is to say not at all.”

So what do we do about it? Maybe media outlets should refuse to have as guests any of these known liars and anti-democratic Trump idolaters. Perhaps introduce them as the representative or state attorney general “who signed onto a brief seeking to overthrow our democracy.” These officials should be forever marked in the same way Richard Nixon was marked as the only president forced to resign.

The House should do the same. There’s been a too-cute-by-half suggestion not to seat them under the Section 3 of the 14th Amendment: “No Person shall be a Senator or Representative in Congress, or elector of President and Vice-President, or hold any office, civil or military, under the United States, or under any State, who, having previously taken an oath, as a member of Congress, or as an officer of the United States, or as a member of any State legislature, or as an executive or judicial officer of any State, to support the Constitution of the United States, shall have engaged in insurrection or rebellion against the same, or given aid or comfort to the enemies thereof.”

But invoking this is not viable or appropriate.

Nevertheless, before swearing in the new House members, Speaker Nancy Pelosi (D-Calif.) should repeat her own recent remarks. “The 126 Republican Members that signed onto this lawsuit brought dishonor to the House,” she said in a statement last week. “Instead of upholding their oath to support and defend the Constitution, they chose to subvert the Constitution and undermine public trust in our sacred democratic institutions.” She should remind lawmakers that their oath means something and that upon taking it, they should renounce their prior actions and fully acknowledge the election outcome.

Certainly, none of the signers, the attorneys general who brought suit, or the Republican senators who have egged on Trump or continued to promote frivolous lawsuits designed to upend the election should ever be reelected to anything. And should they run again, their opponents should remind voters how these people betrayed U.S. democracy.

The degree to which the Republican Party embraced an attempted coup is both chilling and unsurprising given the GOP’s descent into authoritarianism. It should prompt some soul-searching by Republicans who did not join the coup. Is this a party I should be associated with? Is this a party that can be trusted with power? If the answer to either question is no, they should form a new party whose only requirement is loyalty to the Constitution. Sadly, most of their fellow Republicans would be barred under that standard.