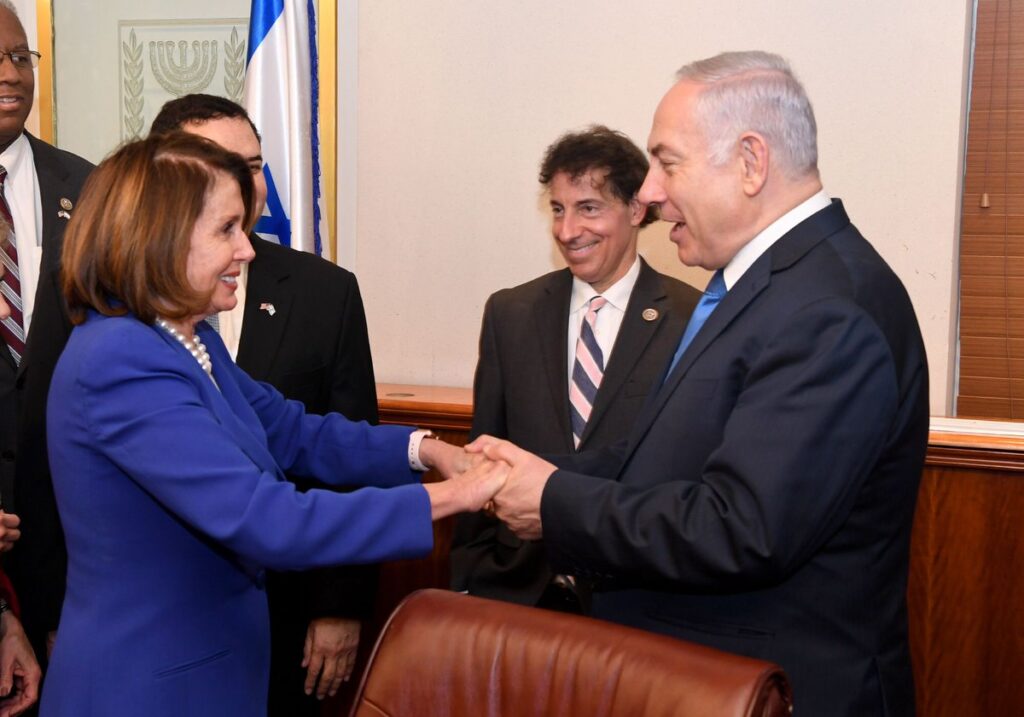 Judea Speaks– ‘Impeachment’s Over, Now Bring On the Criminal Investigations.

1. That ‘they’ are never going to leave him alone,

2. That those various ‘experts’ whose claim to fame has been their superior ability in analyzing, explaining and deconstructing those same aforementioned organized forces of anti-Gentilism and how they operate who have (and in some cases continue) to state that DJT is the ‘favored son of Judea’ and a ‘zionist front-man’ do not possess the minimum attention span/intelligence necessary in figuring out how to pour water out of a pitcher while reading the directions for doing so on the bottom.

Now, as far as the piece itself, please nota bene the following quote from Raskin–the VERY Hebraic ‘manager’ tasked with prosecuting the case against DJT in the Senate and who is pictured above standing right next to none other than ‘Bibi’ Netanyahu–

‘…the clear and present danger that is Donald Trump’

Gee, to any reasonable person with an ounce of common sense, sure sounds like d’Jooz don’t like DJT.

We go to these lengths in underscoring yet again that anyone wanting an accurate explanation for the tectonic political events taking place these days and the role that the organized forces of anti-Gentilism play in it, FOR GOD’S SAKE stay away from anyone within the ‘trooth moovmnt’ as it has now become a small neighborhood within ‘the swamp’ and the same Deep State that has worked to bring down the presidency of DJT for 5 years.

Michelle Goldberg for the NYT

A few hours after the Senate voted in Donald Trump’s impeachment trial on Saturday, I spoke to the lead impeachment manager, Jamie Raskin. He was crushingly disappointed. Despite Republicans’ indulgence of Trump over the last five years, despite the fact that three Republican senators met with Trump’s lawyers before they presented their defense, Raskin had so much faith in the overwhelming case he and his colleagues brought that, until the end, he held out hope of conviction.

“I’ve always been seen as a rose-colored-glasses guy,” he said. Raskin’s openhearted belief that Senate Republicans maintained a remnant of patriotic solidarity with their fellow citizens is part of what made his presentation so effective; he threw himself into it without fatalism or cynicism.

The House managers forced the Senate to reckon with the scale of the terror Trump unleashed on Congress. “I did see a bunch of the Republicans who voted against us, including Mitch McConnell, crying at different points,” said Raskin. The case was strong enough to win over even two Republican senators, Richard Burr and Bill Cassidy, who’d initially voted against holding the trial at all.

But when it comes to McConnell and his caucus, cynicism always prevails.

Because I’m less optimistic than Raskin, I was less disappointed. The 57-to-43 verdict against Trump was the biggest bipartisan majority for conviction in a presidential impeachment trial. And it seems to me that if McConnell couldn’t behave honorably, he did the next best thing with the speech he gave after voting to acquit.

“There is no question, none, that President Trump is practically and morally responsible for provoking the events” of Jan. 6, McConnell said. The attack on the Capitol, he argued, was an effect of the “intensifying crescendo of conspiracy theories, orchestrated by an outgoing president who seemed determined to either overturn the voters’ decision or else torch our institutions on the way out.” Once it began, said McConnell, Trump “watched television happily, happily, as the chaos unfolded.”

The senator’s excoriation could have doubled as the House managers’ closing summation.

To Raskin and the eight other managers, McConnell’s speech was at once a vindication and an insult, showing that they’d proved their case, and that it didn’t matter. McConnell voted to acquit on a manufactured technicality, arguing that a former president is “constitutionally not eligible for conviction.”

His bad faith is awe-inspiring; it was he who refused to move forward with a trial while Trump was still in office. With his split-the-baby solution to Trump’s manifest guilt, McConnell seemed to be trying to stay on the right side of his caucus while calming corporate donors who’ve cut off politicians who supported the insurrectionists.

But — and here’s the important part — McConnell signaled openness to Trump’s prosecution in other forums. “He didn’t get away with anything yet — yet,” said McConnell. “We have a criminal justice system in this country. We have civil litigation. And former presidents are not immune from being accountable by either one.”

To Raskin, a former constitutional law professor, this is no comfort. “You’ve got to rewind to pre-Trump days,” he said. “Politicians should not be telling prosecutors who to prosecute.” Impeachment was a way for our political system to defend itself, and it failed. “We had an opportunity to deal with the clear and present danger that is Donald Trump in a bipartisan way through our constitutional system,” he said. “The Republican Party could not join the effort in sufficient numbers to make it completely successful, so now they are either going to have to fight him internally, or, more likely, they will become an autocratic political party that really does operate like a religious cult.”

This is true. But if we cannot restore pre-Trump norms, McConnell has at least stripped away some of the taboo about prosecuting a former president. In addition to the investigations of Trump’s business practices in New York, prosecutors in Georgia have opened a criminal investigation into his attempts to subvert the election there. Washington’s attorney general is reportedly considering charging Trump with violating a District of Columbia law against provoking violence. Joe Biden’s Justice Department could look into the countless federal crimes Trump appeared to commit in office.

In the past, Republicans seemed ready to try to stop any federal Trump investigation. As The Financial Times reported in December, before Democrats won two pivotal Senate seats in Georgia, “Republicans have made clear that if they control the Senate, they would seek protection for Mr. Trump before approving any attorney general nominee put forward by Mr. Biden.”

Should Trump actually face legal jeopardy, plenty of Republicans will still howl about a witch hunt. McConnell might even join them. But his words can’t easily be taken back.

“There has to be a nationwide reckoning with the gravity and horror of these events,” Raskin said of Trump’s coup attempt. “I hope that the impeachment trial has started that educational process.” It has, and Republicans can no longer pretend that the trial should be the end of it.