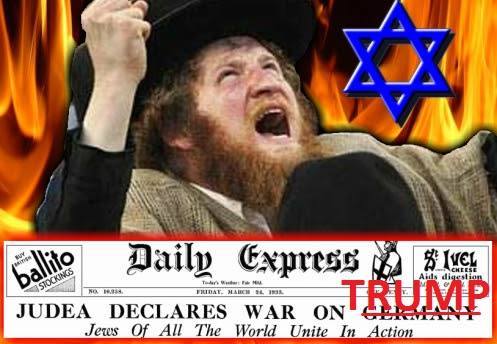 ed note–again, time to play the ‘we told ya so’ card.

Anyone of whatever stripe claiming some degree of ‘expertcy’ as a ‘geo-political analyst’ (and especially as it pertains to organized Jewish interests) and who is now front-and-center in declaring that the ‘Jews don’t like Trump and are out to remove him from office’ but who has spent the last 5 years saying that Trump is ‘owned by the Jews’ needs to be roundly and soundly ignored and avoided as if they carried the plague, which in a sense, they do. All the signs were there, screaming out loud with the same high-decibel drama as the rifle shots heard in Israel’s assassination of JFK, the rockets exploding on the hull of the USS LIBERTY and the crashing of the Twin Towers on 9/11, and yet, these various ‘geo-political analysts’ did not choose to ‘hear’ the evidence that was in front of them for a good 5 years.

Now as it pertains to the deranged ramblings on the part of our deranged Hebrew, please note the following–

‘Still, we can wage a firm campaign against the ‘maizid’ – one who breaks the law with full intent.’

This is precisely what Judea, Inc and its various tentacles have done for the last 5 years, and the ‘law’ which DJT was ‘breaking’ was that of the Torah which PROHIBITS anything other than a Jewish state from the Nile to the Euphrates, and which DJT was obviously abrogating/violating with his planned/proposed ‘Deal of the Century’.

‘As Donald Trump leaves the scene, we can ask: what do we do with his enablers who knew his game but protected him?’

Make no mistake about what the forces of organized anti-Gentilism have in mind with this. They plan a reign of terror for all those who stood in their way of the planned/attempted political assassination of a man who was deemed an Enemy of Zion before he had even received the Republican nomination, which also includes his children, who will–if he is no reinstalled as POTUS come January 20, live with a death sentence for the rest of their lives, just as the Kennedy family did.

The Talmud understands Donald Trump, and it does not like him at all. We, (the Jewish people) overwhelmingly know that he is guilty, but the argument can be made that it’s not worth the stress to society to press the issue, especially considering his diehard supporters. He is almost out of office anyway and – who knows? – maybe he will do better, given the tremendous backlash to his actions.

The Talmud, however, in the end, does not take these self-serving arguments seriously. Last week, I presented to my theology seminar at YASHRUT (Hebrew for ‘Moral Integrity’) before the storming of the Capitol by the pro-Trump mob. We were dealing with how far the Law and its enforcers should go to prevent transgressions on the part of citizens or even given a pass when it is political.

Jewish Law has three designations for lawbreakers, two of which are more famous than the third.

The first is ‘shogeg’ – one who breaks the law unwittingly. Either they are not aware of the activity that they are doing, or they know that, but they do not know that it is illegal. For example, a gardener who does not realize that the manure supplement that he is using is actually highly toxic or dangerous, or even if he knows that but he is unaware that spreading that stuff is illegal. The unwitting lawbreaker does not get away with it; he must pay some damages, and in a spiritual sense, they must ask forgiveness from the offended party and return from their daze to a consciousness of what breaking the Law means.

As my teacher, the great luminary Rabbi Joseph B. Soloveitchik [known as The Rav – ‘Master’] said in response to a question regarding the unknown source of a forbidden act: “You are not allowed to be stupid.”

The second transgressor is the ‘maizid’, an intentional lawbreaker, who is well aware of what they are doing. The ‘maizid’ is hit with the full extent of the Law’s punishment; they pay damages and then some.

The force of the Law goes further here. We are all bidden to enlighten those acting unwittingly so that they cease the misbehaving, even before or during the act. All citizens are called upon to stop the lawbreaking by calling it out or censuring the lawbreaker. And we are all called upon to attempt this ‘stopping action’ in the firmest way if possible.

However, if we have no good or effective way of doing this, we are often instructed that it is better that the “perpetrator” do so unwittingly, rather than they do so with confirmed intent. Society sometimes takes a loss when we see that we cannot change wrongful but mostly innocent intent.

Still, we can wage a firm campaign against the ‘maizid’ – one who breaks the law with full intent. Nevertheless, even in his case, we take responsibility and attempt to change hearts and minds. The Talmud debates ways in which property owners [of produce that is headed to a dedication at the Temple or for use in Jerusalem] can circumvent the intended actions of this ‘maizid’ so that they do not technically break the law.

But sometimes enough is enough! The Talmud introduces us to a third miscreant – the ‘ramai’, best translated by the late Dr. Jacob Herzog as ‘a cheat’ – one who knows full well that he acts without moral integrity and relishes fooling and cheating those in his power or sway. Towering Talmudic sages declare, “We have no responsibility for cheats.” This means that they do not receive understanding, remediation, and the Law must not be stretched to protect them.

So I ask you to be the ‘posek’, the legal decider. To use our initial example, is a leader who constantly spreads noxious and explosive manure to be considered as having done this unwittingly and deserves a pass? OR: is he “only” an intentional lawbreaker who is to be protected by stretched technicalities in the law? OR: if we know him as an incorrigible ‘ramai’ – cheat, do we remove him from leadership and the benefits of normal retirement and throw the book at him?

After all, we should not be held responsible for or chained to for this guy’s actions. We are only fooling ourselves if we believe that we can contain the stink and the moral corrosion, which come with our Leader’s spreading his specially prepared manure.

And as Donald Trump leaves the scene, we can ask: what do we do with his enablers who knew his game but protected him? And this includes not only the politicians, but also clergy who well-knew about his cheating ways and nevertheless continuously gave him not only a Heter/Pass but a ‘Yasher Koach’ [May you increase in strength] salute!