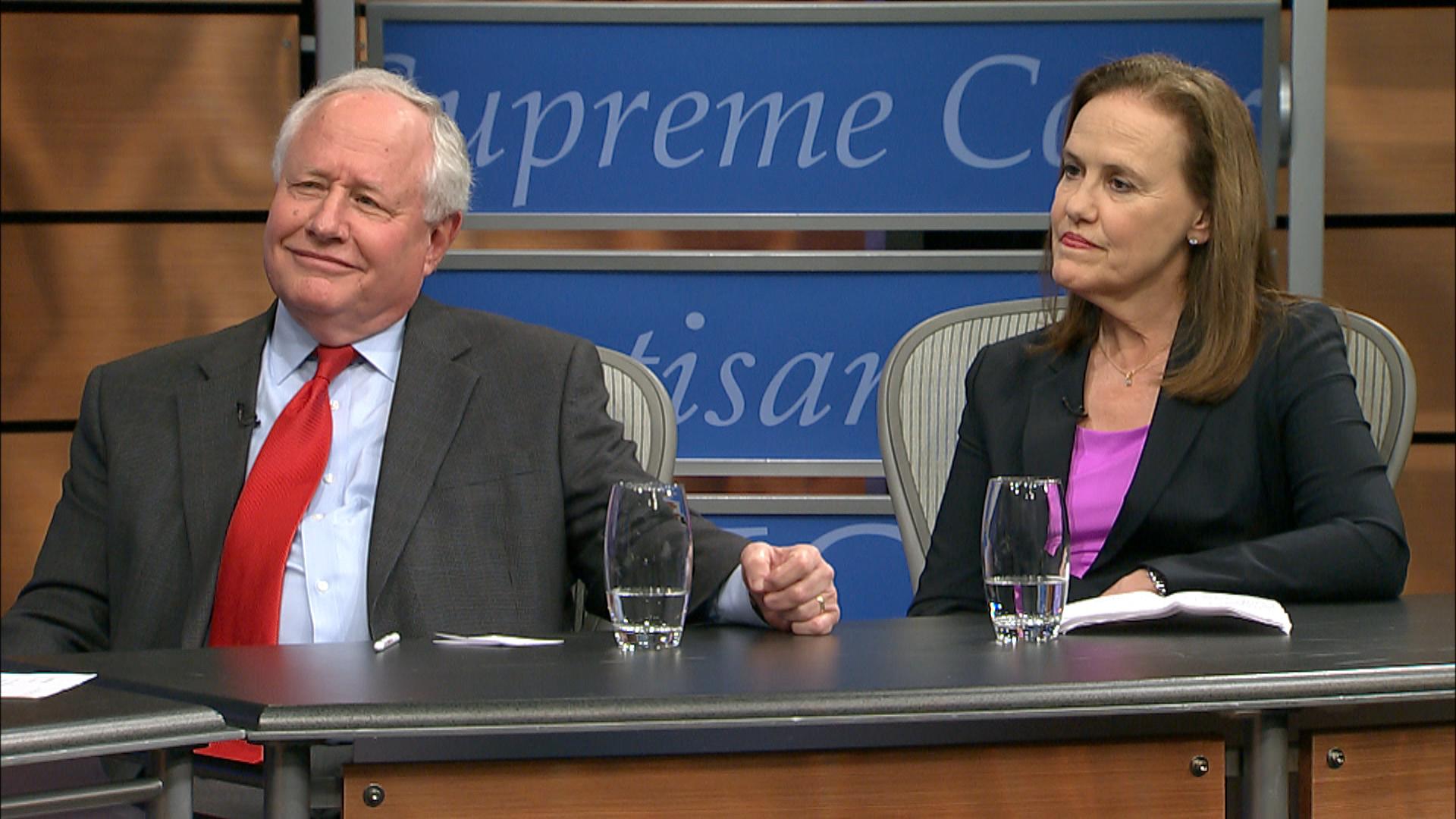 ed note–once again, the ‘NeoCon’ angle to the 5-year coup d’etat in America that few (if any) devote any attention or mental energy, despite the fact that it is precisely this angle that explains all the instability and uproar.

First, as we have covered here on many, many occasions, the author of this piece (featured below alongside the porn-prostitute ‘Stormy Daniels’) Max Boot– 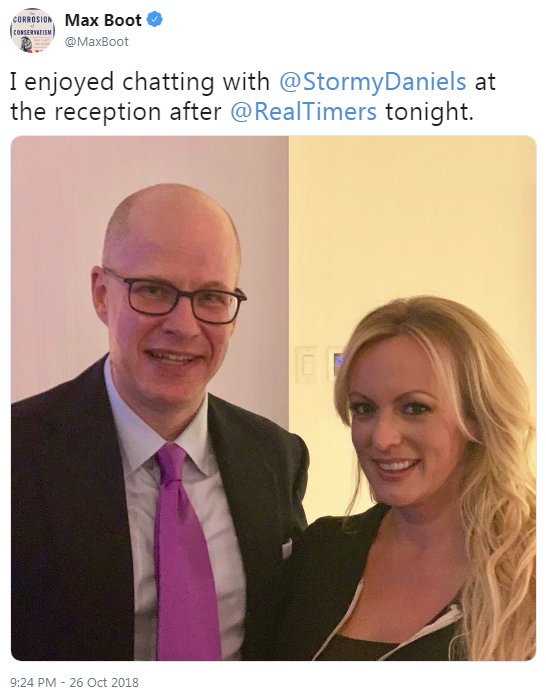 –Is a highly-placed, well-resourced agent of a foreign power, Israel.

His job, working alongside other highly-placed and well-resourced agents such as Jennifer Rubin, William Kristol, the portly Kagan brothers, Eliot Cohen, David Frum et al, exists within a very finite world and operates within a very finite set of mission parameters–harnassing/hijacking America’s political, economic, and military resources in the interests of furthering the thousands-years-old plan which the pirates of Judea have waited to see fulfilled–the creation of ‘Greater Israel’ as specifically laid out within the pages of the Torah (Old Testament) that is only made possible by first running the entire Arab Middle East through the American military meat grinder.

Now, as far as Boot’s singing the praises of Michele Flourney, there are 2 items of great consequence to note here–

1. These are not his words, but rather those of Netanyahu, Boot’s commanding officer,

2. Flourney–like the aforementioned highly-placed and well-resourced agents working for a foreign power, Israel–exists for one purpose as well–utilizing her ‘official’ position within the USGOV to promote/propagate the ‘clash of civilizations’ between the Christian West and Islamic East as the necessary precursor to creating that aforementioned ‘Greater Israel’. As a NeoCon ‘gopher’ of the Gentile persuasion, she was singularly responsible for persuading then-POTUS Obama into committing American military forces to the annihilation of Libya that–in addition to destroying that country, also led to the murder of its leader, Ghaddafi. She also advocates war against Iran and war against Russia.

In short and in sum, there is only one reason for Boot to be singing her praises, and it is summed up in 5 words–

CLASH OF CIVILIZATIONS FOR JUDEA

President Trump spent months warning that, if Joe Biden won, his administration would be controlled by socialist subversives. President-elect Biden’s senior appointments so far give the lie to that ludicrous charge. His picks — such as White House chief of staff-designate Ron Klain, secretary of state-nominee Antony Blinken and treasury secretary-nominee Janet Yellen — all have well-developed reputations for centrism and competence. “The bad news for progressives,” writes the Guardian, “is that there has not yet been a single person announced that the left can be enthusiastic about.”

In a desperate bid to regain influence, some leftist groups are now trying to torpedo the possible nomination of Michèle Flournoy as defense secretary. She would be the first woman to run the Defense Department — a position that she is eminently qualified for. She was a deputy assistant secretary of defense in the Clinton administration and undersecretary of defense for policy in the Obama administration. In between stints in government, she co-founded of one of the most respected defense-policy think tanks, the Center for a New American Security.

Flournoy has won superlative praise from those who have worked with her — in particular women she has mentored in a male-dominated environment. Janine Davidson, a former undersecretary of the Navy, called her “the best boss I’ve ever had,” while Doug Wilson, a former assistant secretary of defense, called her “one of the most capable, intelligent, steady and humane leaders I’ve ever worked with.”

Reading these descriptions, you would not recognize the caricature that progressives are promulgating. Code Pink — a group that demands the United States sever ties with Saudi Arabia, stop “imperialist coup mongering” in Venezuela and shut down “killer drones” — calls Flournoy “an angel of death for the American empire.” What malarkey.

Code Pink argues that “Flournoy’s career has been marked by the unethical spinning of revolving doors between the Pentagon, consulting firms helping businesses procure Pentagon contracts, and military-industrial think tanks,” but there is no indication that Flournoy did anything unusual or unethical. All three reported contenders for defense secretary sit on defense industry boards: Flournoy at Booz Allen Hamilton, former homeland security secretary Jeh Johnson at Lockheed Martin and retired Gen. Lloyd Austin at Raytheon. That’s the price you pay for selecting people with experience and expertise. Ethical officials such as Flournoy can separate their private employment from their public duties — and there are many checks in place to avoid conflicts of interest.

The rest of the Code Pink assault is even more misleading. It accuses Flournoy, for example, of helping to “engineer political and humanitarian disasters in Libya and Syria and a new escalation of the endless war in Afghanistan.” The United States had almost no military involvement in Syria while she was at the Pentagon, so it’s hard to see how she “engineered” that tragedy. She did support the use of NATO air power in Libya and the troop surge in Afghanistan, and neither worked out as well as anyone had hoped. But they did avert the disaster of Moammar Gaddafi slaughtering his own people and of the Taliban taking power. That should count for something among those who profess to champion human rights. In any case, backing President Barack Obama’s military interventions should hardly be a disqualifier in a Biden administration.

On Monday, Code Pink and other far-left groups such as RootsAction and Progressive Democrats of America issued a new statement accusing Flournoy of advocating a “potentially catastrophic” policy toward China: “On January 15, 2020, she told Congress the U.S. must prepare to fight and prevail in a future conflict with China by credibly threatening to sink the entire Chinese navy in 72 hours and investing heavily in unmanned systems. At a time when we must work with China to fight the coronavirus and save the planet from an existential climate crisis, Flournoy’s approach would undermine such efforts by preparing for war with China.”

This tendentious screed ignores the sentence immediately before Flournoy speculated (“as an illustrative example”) about fighting the Chinese Navy: “The United States must think creatively about how we might stop a rival great power from starting down the road to war.” Her testimony was not warmongering but an application of the old Roman adage “Si vis pacem, para bellum” (“If you want peace, prepare for war”). Indeed, her testimony lays out a sophisticated policy of both cooperating and competing with China.

Biden doesn’t have to appoint Flournoy. There are other qualified picks — although he would do well to stay away from nominating another general to a senior civilian post. But it would be a big mistake for him to give in to silly and strident leftist scaremongering about one of the most qualified leaders for the Defense Department — and one who will shatter the glass ceiling.

With their intemperate rhetoric about socialism and “defunding the police,” progressives helped cost Democrats seats in the House and Senate. They don’t deserve a veto on Biden’s Cabinet picks — and so far he wisely has not given them one.