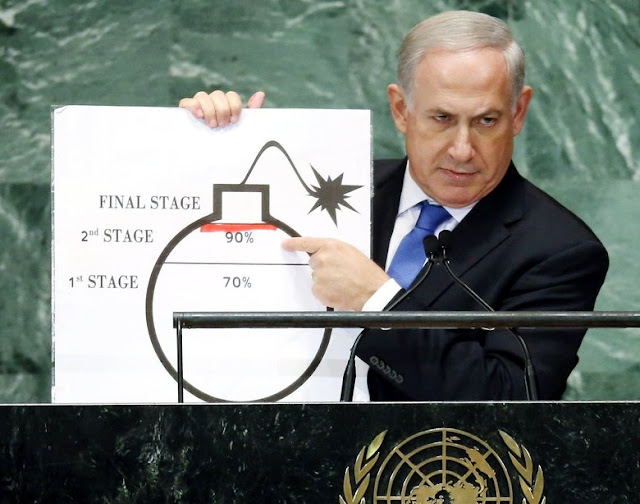 ‘A united Jerusalem is the capital of Israel. Jerusalem was and will always be ours. It shall never be divided and disunited again’
ed note–jes’ a lil’ dose of reality for all those using the now-infamous footage of Netanyahu smiling and clapping in the Oval Office as ‘proof’ that Trump is the ‘favored son of Judea’ that this peace deal runs 666% counter to the various promises Netanyahu has made over the decades concerning dividing up Joo-roo-salem and that maybe, JUST MAYBE, he isn’t smiling or clapping at all but rather baring his teeth in rage and rubbing his hands in preparation for some act of political terrorism meant to blow up that ‘peace deal’.
Reuters
Israeli Prime Minister Benjamin Netanyahu said on Thursday that Jerusalem would “never be divided” and would remain the capital of the Jewish state, drawing an angry response from the Palestinians.
The remarks followed talks with U.S. President Barack Obama earlier this week in Washington where the Israeli leader said he hoped to widen the peace process across the Arab world but stopped short of embracing the creation of a Palestinian state.
Palestinians seeking to establish their own state in the Israeli-occupied West Bank and the Hamas-controlled Gaza Strip, as part of a future peace agreement with Israel, say they want their capital to be in Jerusalem.
Netanyahu’s comments on Thursday, at a ceremony marking Israel’s capture of Arab East Jerusalem in the 1967 Middle East War, were in line with his election pledge to keep Jerusalem “united.”
“A united Jerusalem is the capital of Israel. Jerusalem was and will always be ours. It shall never be divided and disunited again,” Netanyahu said at the ceremony.
Netanyahu, whose right-leaning coalition took office nearly two months ago, said that only Israeli sovereignty over a united Jerusalem would ensure free religious practice and access to holy sites by the three major faiths.
Palestinian negotiator Saeb Erekat said Netanyahu’s position on Jerusalem was a setback to the goal of a two-state solution, which is strongly supported by the Obama administration.
“Mr. Netanyahu, by saying that, he’s saying the state of conflict will be eternal,” Erekat said.
Netanyahu wants talks with Palestinians to focus on shoring up their economy and improving security in the West Bank instead of tackling thorny issues like the status of Jerusalem, the fate of Palestinian refugees and final borders.
Palestinians reject this approach, saying the renewal of peace negotiations with Israel hinges on Netanyahu publicly endorsing Palestinian statehood and halting settlement activity.
The statement by Netanyahu on Jerusalem was similar to one made by Obama during last year’s U.S. presidential campaign.
In a speech to a pro-Israel lobby group last June, Obama said Jerusalem “will remain the capital of Israel, and it must remain undivided.”
He later said Palestinians and Israelis had to negotiate the status of the city. “We don’t want barbed wire running through Jerusalem, similar to the way it was prior to the ‘67 war,” Obama explained.