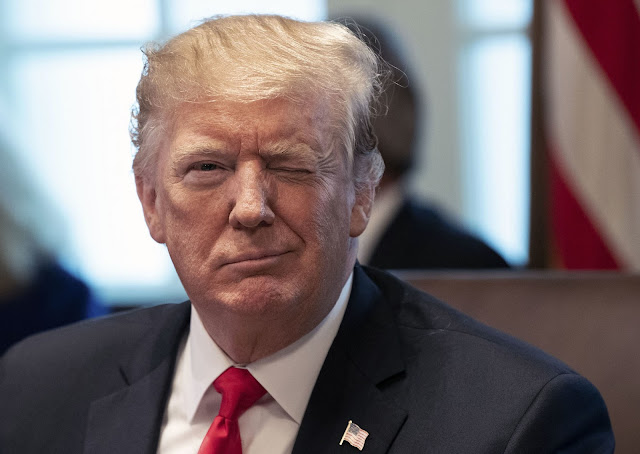 Iran was going to have to respond. That, we knew for sure. But their response could have been a lot more severe than it was.
USA Today
What if they gave a war and nobody came? That saying from the 1960s is particularly applicable to the Iran crisis. But in this case the no-shows were the leaders of the potentially warring parties.
President Trump announced Wednesday that there would be increased sanctions but no retaliatory strikes for Iran’s ballistic missile assault on U.S. bases in Iraq. Iran’s Supreme Leader Ayatollah Ali Khamenei said, “for the time being, the Americans have been given a slap,” but no other attacks were coming soon. Both sides have relaxed tensions, and the threat of war has receded.
The tone has shifted significantly from recent days. Public fury followed last week’s drone strike that killed Iranian General Qassem Soliemani. Iran vowed revenge and hoisted their red flag of doom. Threats were exchanged. Iran said it had a list of thirty targets; President Trump raised that to fifty-two, one for each of the American embassy hostages; Iran countered with 290 for the people killed on Iran Air Flight 655. Mourners flooded Iranian streets shouting the national slogan, “Death to America.” In the U.S., the partisan divide exacerbated the crisis, and politicians and pundits became agitated over issues like assassination, war crimes, World War Three, and the return of conscription.
But all of this ado obscured the basic strategic calculus; neither side actually wanted war. President Trump ordered the Soleimani operation to disrupt further planned Iranian attacks after the death of an American contractor and the attack on the U.S. Embassy by Iranian-backed militia. But he did not contemplate further action, and indeed had long hesitated to use force in the first place until American lives were at stake. Iran also did not seek direct military confrontation with the United States, which would impose devastating consequences.
Iran had to act
However, Iran’s leaders could not simply do nothing. They had built a personality cult around Soleimani, who was both loved and feared by the Iranian people. He was too important for there not to be a response. The legitimacy of the regime was at stake. So Iran needed to act to save face; and the United States needed to let them.
This scenario was laid out last Sunday by Maj. Gen. Hossein Dehghan, the military advisor to Iran’s Supreme Leader Ayatollah Ali Khamenei. In an interview with CNN he said that the response to the Soleimani takedown had to come from Iran, not through proxies; that it had to be against military targets, not civilians; and that America must “receive a blow that is equal to the blow they have inflicted.” He added that “afterward they should not seek a new cycle.” This signal was clear – Iran was not contemplating opening general hostilities and would not do something that would force the United States to escalate the conflict.
Iran also did not want its proxies to engage in ad hoc attacks that would prompt a wider war, such as random attacks on civilian American targets of opportunity. Hassan Nasrallah, the head of Lebanese Hezbollah, gave orders with “extreme clarity” to his followers that there would be no attacks on any U.S. citizens in the region. “They cannot be touched,” he declared, because this would “only serve Trump’s agenda.” And, ruin Iran’s plan.
Iran, Iraq and Suleimani:Trump crisis mismanagement on full display with roll of dice
But what to do? President Trump had established a red line that he would respond forcefully to any actions that took American lives. And Tehran knew that unlike his predecessor, President Trump backed up his red lines with a credible threat of force. So whatever they did had to appear to be a robust response to American aggression, but not cross the line that meant certain escalation.
Iran’s limited engagement was what was required
The solution was the missile attacks. Iran used weapons the United States has demanded they limit or get rid of completely, which was a symbolic slap. The attack was given a full P.R. push. Ayatollah Khamenei was pictured personally in the control room. The missiles were filmed being launched. Iranian TV showed crowds praying and celebrating at Soleimani’s tomb. The IRGC proudly announced they had launched an attack on Al Assad military base “in the name of martyr Gen. Qasem Soleimani.” Iran’s semi-official Fars News reported this was the promised “severe revenge.” The regime portrayed the attack as an important moment of reclaiming national honor.
And then after a few salvoes it was over. Iran’s Foreign Minister Mohammad Zarif tweeted that “Iran took and concluded proportionate measures in self-defense under Article 51 of UN Charter targeting [the] base from which cowardly armed attack against our citizens and senior officials were launched.” He added that Iran “does not seek escalation or war, but will defend ourselves against any aggression.” Miraculously – and probably purposefully – there were no reported American casualties. Whether this was due to excellent force protection measures, early warning being given to U.S. commanders, or being tipped off in advance, as rumor had it, remains to be seen. Iranian media are claiming 80 Americans killed and 200 wounded. But President Trump responded with what Iran wanted to hear: “All is well.” No signal of escalation, no bellicosity, no rage. Everything went as planned.
Perhaps now the United States and Iran can begin diplomatic engagement over their outstanding differences. The White House has been calling for this from the beginning of the maximum pressure campaign. And Iran now knows both the limits of the president’s strategic patience, as well as his willingness to limit the scope of a conflict that is in no country’s interest. This was a textbook case of diplomatic signaling and crisis resolution. The outcome: war averted.