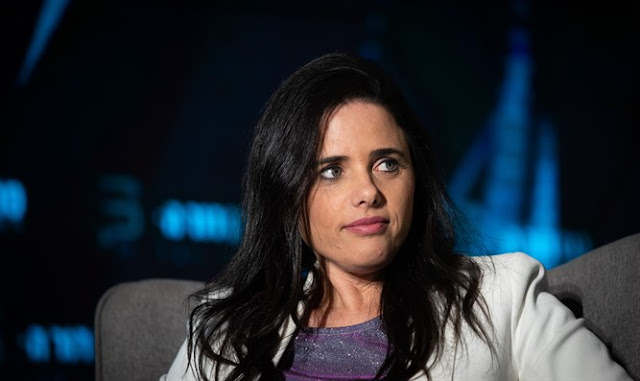 MK Ayelet Shaked reiterates her party will block a Palestinian state, makes clear she and Bennett will continue to speak their mind.
ed note–again, no one should make the mistake of thinking for a second that the present Impeachment business against DJT, POTUS being led by the 2-headed Zionist Deep State hydra of Nadler/Schiff and Trump’s proposal for a resolution to the quagmire between the Jews and the Arabs are not related. Every president, beginning with JFK and then moving on to Nixon, Ford, Carter, George H.W. Bush and even the scalawag Clinton who went down the road of imposing Ameican largesse in trying to contain Israel all met with the same fate and Trump is no different.
Please note what the insane Hebress Shaked had to say herein, to wit–
‘We will not allow our land to be handed over to Arabs or to anyone else. Our land is ours.’
On the surface there is not much to read into this until one understands that the ‘our land’ which Shaked is referencing is not merely some tiny sliver of real estate on the eastern shores of the Mediterranean, but rather the entirety of the Middle East, from the Nile to Euphrates rivers as expressly and explicitly laid out within the pages of the Old Testament.
Also keep in mind that Shaked and Bennett–at times appearing to be at odds with Netanyahu, nevertheless–making this statement ahead of Netanyahu’s trip to meet with Trump to discuss his ‘ultimate peace deal’ was done only with close consultation/collusion with Nutty Netty who is basically using the 2 as political couriers in delivering the message to DJT that Israel will not be party to his peace deal.
Israel National News
MK Ayelet Shaked (New Right) on Friday commented on the US peace plan, known as the “Deal of the Century”, and reiterated Defense Minister Naftali Bennett’s statement that her party will not permit the creation of a Palestinian state.
“We do not know all the details, but I can say that we will not allow for land to be handed over to Arabs or to anyone else. Our land is ours. In addition, we will not allow for the recognition of a Palestinian state. We think a Palestinian state is a dangerous thing for the State of Israel and certainly we will not allow that to happen,” Shaked said in an interview with Channel 12’s Ofira Asayag and Eyal Berkovic.
“At the same time,” she continued, “it appears as though this plan presents a great opportunity to apply Israeli law on the Jordan Valley and on the Jewish settlement in Judea and Samaria and if possible, we will push to do so even before the elections.”
Shaked further said, “It should be understood, no US administration has been as sympathetic [to Israel] as President Trump’s administration. American presidents have so far supported the two-state plan along the 1967 borders with border amendments. This is the first time that a US government may tell us ‘apply Israeli law to all communities in Judea and Samaria.’ They understand that there is no such scenario in which we will evict communities.”
Shaked was asked whether she and Bennett are free to say what they think or whether they risk Bennett being fired from his ministerial post by Prime Minister Binyamin Netanyahu for speaking his mind.
“Naftali Bennett will say what he thinks is right for the State of Israel, even if it costs him his post. He will do what is right for the State of Israel. If he thinks it is right to say things that will not be comfortable for the Prime Minister to hear, he will say them. We have not been afraid to do that throughout our political career,” she replied.
Asked if Israel’s third election within a year has harmed her personally, Shaked responded, “The third election has harmed the country. The idea of a unity government is dead. Netanyahu offered Gantz six months and if Gantz had accepted, he would have been Prime Minister in two months. Unfortunately he refused and today he regrets it.”