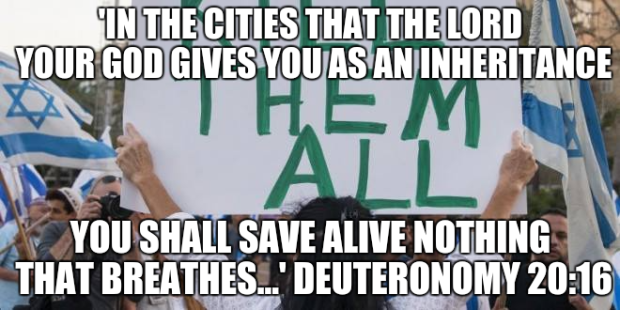 Not only do we ask for Hashem to take revenge… but we ask that He let us see it! What kind of revenge?

ed note–be not swayed by the sweet nothings whispered out of the lying Judaic mouth of our deranged follower of Judaism concerning the ‘peaceful’ nature of the revenge for which he says that Jews pray, as all the major Judaic celebrations, from Passover to H’nookah to Purim have as their common denominator the blood-n-guts aspect of Gentile death, destruction and suffering.

Keep in mind as well that the other 2 ‘Abrahamic’ faiths–Christianity and Islam–have no such prayers for ‘revenge’. Jesus said ‘turn the other cheek’ and Mohammed said that ‘if your enemy is disposed towards peace, then let there be peace’. Only Judaism commands such precepts and receives a pass for doing so while Gentiles the world over, and especially those of the Christian variety, celebrate the Jews destruction over their cultures and civilizations while hailing these murdering marauders as ‘God’s chosen people’.

During the next few weeks we Jews will be doing a lot of davening in our Jewish ritualistic prayer. We will be asking Hashem for good health, happiness and forgiveness from things we should not have done. We will ask our Father in Heaven for success in educating our children, for financial security, parnossa, and, of course, for a happy home, shalom bayit. We will beg Him to heal the sick, take care of our elderly parents and guide us properly in raising children in the way of Torah.

For those who have not yet been blessed with having children, we will pierce the heavens with our prayers. We will beg Hashem to give them this wonderful blessing. We will do the same for the tens of thousands of beautiful Yidden who are still single. We will not forget our brothers and sisters who suffer emotionally or with various addictions. We will pray for Moshiach, for all Jews to come home to Eretz Yisrael and for the chance to dance in the 3rd – and final – Holy Temple, the Bet Ha’Mikdash.

We will ask Hashem to give us a 2nd chance… ok, a 27th chance, since we keep repeating our mistakes. We will ask for strength in attending synagogue minyan (and not just for morning prayers -Shacharit!), in going to Torah shiurim, in finding a great learning partner, a chavruta and in following the guidance of our Rabbis. We will daven for better speech, more modest dress (guys too, by the way!) and for more energy, enthusiasm and excitement in serving our King!

And we will daven (pray) for revenge.

Rewind that for a second–

“And we will daven for revenge”.

Yes, you read that right – we Jews will daven (pray) for revenge.

Focus carefully on the words being said in Selichot and what is written many times in the machzor. In addition to the long list stated above (and many other things I did not mention) we will be begging Hashem to take revenge. Here are just 2 examples:

In the famous tefilla, said on both Rosh Hashanah and Yom Kippur; “Ata Hu Elokenu” – we list a tiny sample of Hashem’s attributes according to the aleph bet. The list (translated by ArtScroll) contains “pure of eyes” and that “His raiment is charity” and how Hashem is “righteous and fair” but when we come to the letter Nun, its “Ne’epad nekama” – “He is garbed in vengeance”. Imagine that… vengeance being a virtue…

Starting on Rosh Hashanah, we will say “Avinu Malkenu” twice each day. In that powerful prayer we ask to be inscribed in the book of life, redemption and forgiveness. We ask that our Father and King fill our hands with blessings, have pity on our children and that He be gracious with us. We also say the following; “Our Father, our King, avenge – before our eyes – the spilled blood of Your servants”. Wow! Not only are we asking for Hashem to take revenge… but we are asking that He let us see it!

What’s this revenge we are referring to? Do we really want Hashem to do to them what they did to us? Are we asking for forced conversions, to expel goyim from Spain, to burn churches or set up gas chambers? Heaven forbid! That’s not at all what we mean. So if not that… then what is the revenge we want? Let me explain.

Today’s anti-Semite has become very clever. He/she no longer says they hate Jews. That’s not nice and very politically un-correct. The buzz word these days is called “Anti Israel”. “We don’t hate Jews”, says the 2021 anti-Semite… “as a matter of fact, my son married a Jew! Its Israel we oppose. Its Zionism. It’s the Jewish state, not the Jew himself. We hate the occupation and how they treat the poor and friendly Palestinians. Trust me, we love Jews… it’s just Israel that we hate.”

Nothing, of course, could be farther from the truth. Every person who makes the claims above is a 100% anti-Semite who simply disguise their hatred. This has been documented and proven beyond a doubt, so please don’t ever make that mistake. The professors in your kid’s university, the actors in Hollywood and the BDS movement are exactly the same. They hate Israel and also the Jews themselves… yet this is the answer to our question about revenge.

What is the best revenge? What are we asking for from Hashem when we beg him to exact vengeance on the nations?

We want Him to bless us with a strong and proud State of Israel! We want Israel to be strong economically and militarily. We want the country to grow, expand and build on every square inch of land. We want millions of new trees, medical technology that saves lives and breakthrough research in all areas of life. We want Jews to come home from the four-corners of the globe to live their lives in this wonderful country. Most importantly, we want Eretz Yisrael to be the source of Torah, where hundreds of thousands of students learn and grow in Avodat Hashem, where new seforim are written by the day and where the Torah is not just studied, but is the way of life! That is the revenge we want!

Let the BDS protester cry over a Jewish country that is a beacon of light to the entire world.

Let Ben and Jerry and Roger (Waters) and Ilhan and Rashida and AOC yell and scream at an Israel that radiates Torah 24/7.

This is our revenge! The revenge of construction not destruction. The revenge of life not death. The revenge of national pride not international genocide. So yes, during these days – right through Neilah on Yom Kippur – daven with your heart and soul for Hashem to exact this revenge upon the enemies of Israel.

Shana Tova to one and all and remember… Am Yisrael Chai!