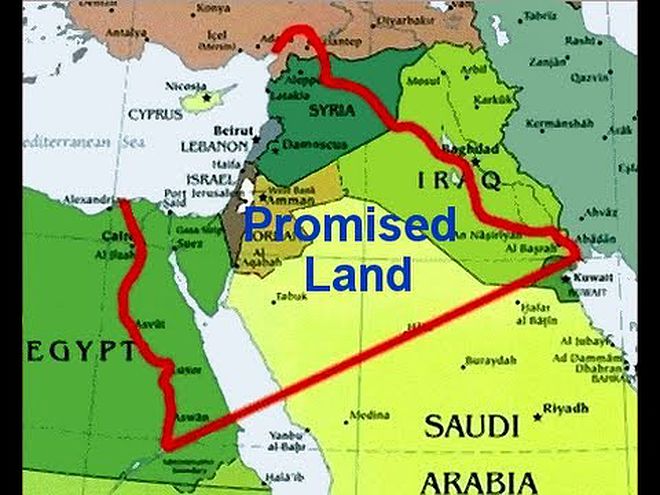 Trump says he expects not only Saudis, but also Iran, to make Middle East peace

President tells reporters he thinks Riyadh will follow Abu Dhabi’s lead and open up relations with Israel, then adds he believes Tehran will ‘ultimately come in too’

ed note–for those one-dimensioners who think this signals that Trump is orchestrating all of this at the behest of Netanyahu, keep in mind a few ‘protocols’ that are undeniable in nature–

1. Israel does not want ‘peace’, she wants LAND, ALL OF IT BETWEEN THE NILE AND EUPHRATES, exactly as spelled out in black and white in the Torah, and war has been/is/always will be the most efficient way of attaining that land and Trump’s ‘ultimate peace deal’ acts as a firewall in stopping the beast from gobbling up as much as one teaspoon more.

2. The Jewish state does not want Iran contained or brought into any ‘peace deal’, she wants Iran DESTROYED in exactly the same manner Iraq was destroyed by the little monkey in the White House George W. Bush.

3. Despite the high-minded commentary that accompanied it, the Iran ‘nuclear deal’ brokered by Obama was done with the intention of (eventually) destroying Iran and therefore Trump pulling out of that deal was necessary in order to prevent more war.

US President Donald Trump said Wednesday night he expected Saudi Arabia to join Arab normalization with Israel, hours after the country’s foreign minister ruled out any formalized ties before an Israeli-Palestinian peace accord. He then said he believed Iran would ultimately “come in too.”

During a press conference, a reporter asked the president if expects Riyadh to follow Abu Dhabi’s lead and open up relations with the Jewish state. “I do,” Trump replied.

A short time later, after discussing the possibility of the UAE buying US F-35 fighter jets and the importance of the Israel-UAE deal, he added: “I see a lot of countries coming in fairly quickly. And when you have them all in, ultimately Iran will come in too. There’ll be peace in the Middle East. That’ll be nice. They never thought this could have happened. And with the horrendously stupid Iran deal signed by Obama, this could have never happened.”

He did not elaborate further.

Saudi Arabia has cautiously backed the Israel-UAE deal but said it will not make peace with Israel until the Palestinians do. Iran is avowedly committed to the destruction of Israel, supports Hezbollah, Hamas and other terror groups, has castigated regional states that legitimize Israel, and is believed by Israel and the US to be seeking a nuclear weapons arsenal.

Earlier in the day Saudi Foreign Minister Faisal bin Farhan al-Saud said at a press conference in Berlin: “The conditions for [relations] are clear: Peace must be achieved between the Israelis and the Palestinians, on the basis of international parameters. Once this goal is achieved, anything is possible”

Since 2002, Saudi Arabia has sponsored the Arab Peace Initiative, which states that normalization with Israel will come only if Jerusalem and Ramallah can come to a lasting accord and establish a Palestinian state on the basis of the 1967 lines.

In cautious support for the agreement, however, al-Saud also lauded “actions to suspend unilateral Israeli actions” and said the deal “could be viewed as positive.”

Kushner, who reportedly played a role in brokering the Israel-UAE agreement, said in an interview with CNBC that Saudi Arabia’s younger generation admired Israel and sought ties with the Jewish state.

“They see Israel as almost the Silicon Valley of the Middle East and they want to be connected to it as a trading partner, as a technology partner, as a security partner,” Kushner said of young Saudis.

The older generations, he said, were “still stuck in conflicts of the past,” and despite the country’s recent efforts toward modernization, “you can’t turn around a battleship overnight.”

Despite the opposition from some of the older generation, Kushner predicted that Thursday’s landmark deal would serve as a catalyst for opening ties between Israel and other Arab states, including Saudi Arabia.

“I do think we have other countries that are very interested in moving forward [with normalization] and as that progresses I do think that it’s an inevitability that Saudi Arabia and Israel will have fully normalized relations and they’ll be able to do a lot of great things together,” Kushner said.

Israel’s Channel 13 on Friday night quoted unnamed Arab sources saying the Saudis would likely “step up cooperation” with Israel in the wake of the UAE deal, though they were not expected to formally sign an accord at this stage.

Israel’s historic deal with the UAE marked the third normalization agreement Israel has struck with an Arab country, after Egypt and Jordan. Trump said he hoped to host a signing ceremony in about three weeks.

In the days following the bombshell announcement, there have already been rumblings that more Arab states will follow in UAE’s footsteps.

Kushner said hours after the deal was announced that there was a “very good chance” that more deals will be announced in the coming 90 days. Netanyahu also predicted a widening circle of normalized ties.

Senior Israeli officials reportedly said Thursday that they are in advanced talks with Bahrain about normalizing ties. A senior American official also said that Oman was in the mix, according to a report from the Kan public broadcaster.

On Monday, Kushner said that Israel made progress trying to normalize ties with other Arab countries by agreeing to the framework laid out in the administration’s January proposal, which included establishing a Palestinian state and giving up land in Israel proper.

“Israel has made a very generous offer for a state and for land swaps and the ball is really in the court of the Palestinians now,” he said. “We welcome them any time to come to the table.”

The Palestinian Authority called Thursday for the UAE to “immediately retract” its agreement to normalize relations with Israel, which it called a “despicable decision.”

PA President Mahmoud Abbas ordered an emergency meeting in response to the agreement, while the PA recalled its ambassador to the UAE in protest over the deal.